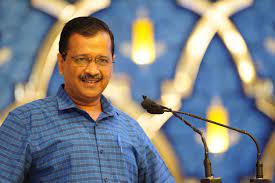 AAP national convener Arvind Kejriwal, who is on a two-day visit to Punjab, also promised the formation of a trade and industry body and its decisions will have to be implemented by the state government.

Jalandhar: AAP national convener Arvind Kejriwal on Wednesday promised end of “inspector raj” and “red-tapism plaguing the trade and industrial sector” if his party is voted to power in the 2022 Punjab assembly polls.

Mr Kejriwal, who is on a two-day visit to Punjab, also promised the formation of a trade and industry body and its decisions will have to be implemented by the state government.

He stated this while addressing traders and industrialists of Jalandhar after hearing their grievances.

Addressing the gathering, the Delhi chief minister assured the trade and industry sector to resolve their grievances and take steps to boost their businesses.

He also assured to provide round-the-clock power to the sector and gave an example of his government in the national capital on ensuring 24-hour electricity there.

“In Punjab, we will ensure 24-hour electricity. We know how to do it,” Mr Kejriwal claimed.

He also asserted that “inspector raj and red-tapism” will be ended in the state as he blamed the previous governments for “promoting” the same for corruption.

To prove his point, the AAP leader said his government in Delhi had stopped “raid raj” and reduced VAT rate that led to doubling of tax revenue at ₹ 60,000 crore.

It happened because the government trusted the traders, he said. He also promised to end “hafta system and goonda tax” in the state.

He also promised to clear the pending VAT refunds within three to six months as he underlined that capital is essential for running a trade or business.

The Delhi CM promised to improve infrastructure in focal points and industrial zones in Punjab to facilitate the industry if voted to power in the state.

Replying to another issue raised by the traders, he said the industrialists pointed out to him that former CMs Parkash Singh Badal and Captain Amarinder Singh had promised to resolve it after elections.

“My request (to you) is once ask Kejriwal — “Ek mauka saanu vi” (Give us a chance too). I assure you that you will forget others,” Mr Kejriwal said as he urged people to chose his party over others in the next state polls. Trains can run again from April 15, must arrive station 4 hours before