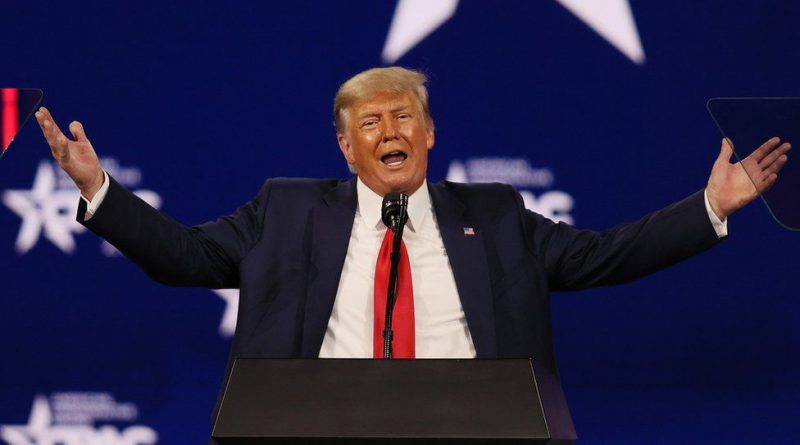 He was barred indefinitely from both sites in January in the wake of posts he made on the US Capitol riots, but last month Facebook’s Oversight Board criticized the open-ended penalty.

Facebook said Mr Trump’s actions were “a severe violation of our rules”.

Mr Trump said the move was “an insult” to the millions who voted for him in last year’s presidential election.

Facebook’s move comes as the social media giant is also ending a policy shielding politicians from some content moderation rules.

It said that it would no longer give politicians immunity for deceptive or abusive content based on their comments being newsworthy.

Mr Trump’s ban was effective from the date of the initial suspension on 7 January, Facebook’s vice-president of global affairs Nick Clegg said in a post.

“Given the gravity of the circumstances that led to Mr Trump’s suspension, we believe his actions constituted a severe violation of our rules which merit the highest penalty available,” it added.

“If we determine that there is still a serious risk to public safety, we will extend the restriction for a set period of time and continue to re-evaluate until that risk has receded.”

On his return, Mr Trump will be held to “a strict set of rapidly escalating sanctions,” for any violations, Mr Clegg’s statement noted.

How has Mr Trump responded?

In a statement issued from his Save America political action committee, Mr Trump said: “Facebook’s ruling is an insult to the record-setting 75m people, plus many others, who voted for us…”

“They shouldn’t be allowed to get away with this censoring and silencing, and ultimately, we will win. Our country can’t take this abuse anymore!”

In a second statement on the two-year ban, Mr Trump attacked Facebook’s founder.

“Next time I’m in the White House there will be no more dinners, at his request, with Mark Zuckerberg and his wife,” the former president said. “It will be all business!”

The move by Facebook allows Mr Trump to return to the platform before the 2024 presidential election.

It also comes as he prepares to again hold the large scale in-person rallies that were a signature of his campaigns and presidency. One of his first is planned for Dallas, Texas, in early July, according to local media.

Earlier this week, it emerged that the communications platform set up by Mr Trump in the wake of his social media bans – From the Desk of Donald J Trump – has been permanently shut down.

In addition to Facebook, which has over two billion monthly users, Mr Trump has also been banned from Twitter, YouTube, Snapchat, Twitch and other social media platforms over the January riot.

‘This is a big call’

Facebook’s dilemma on Trump was complex, involved trade-offs, and was guaranteed to upset millions of people. The fact is – whatever their decision – it was bound to be polarising.

But just to be clear: today Facebook, the world’s biggest social network, has denied access to its megaphone to a man who 74 million people voted for. They didn’t just know him, or approve of him; they voted for him to be US president. That is a big call.

Facebook says public figures who violate its rules by inciting unrest or violence will be suspended for a month or, in more serious cases, up to two years.

It comes as part of an effort to undo a previous policy of allowing newsworthy political speech despite a potential that it may cause harm.

Posts that are deemed worthy of an exception, despite possible violations, may still be allowed but will be given a warning label by Facebook. The company says it will no longer treat “content posted by politicians any differently”.

“Instead, we will simply apply our newsworthiness balancing test in the same way to all content, measuring whether the public interest value of the content outweighs the potential risk of harm by leaving it up.”

The company’s Oversight Board found that Mr Trump’s initial ban was appropriate, but that there was no rationale for the ban to remain indefinitely.

The independent board, which is funded by Facebook, has 20 members who are able to make binding decisions on content. Among the members are legal scholars, journalists, freedom of speech experts and a former prime minister of Denmark.

The announcement comes on the same day that regulators in Europe and the UK begin formal anti-trust inquiries into whether Facebook misused customer data.