In Maharashtra, the lockdown has been imposed from 8 am to 1 pm on May 1 due to deteriorating conditions from Corona. This lockdown, implemented for the next 15 days, is named Break the Chain. Chief Minister Uddhav Thackeray announced this on Tuesday evening. The 10th and 12th examinations in the state have also been postponed due to the lockdown. Restrictions have been imposed on people leaving their homes without doing any necessary work. During the lockdown, the government will provide assistance of Rs 1500 to the real estate sector laborers and rickshaw pullers with permits. For the next one month, a plate of food will also be given free of cost to the poor under the Shiva Meal Scheme.

Section 144 has been imposed in the entire state of Maharashtra from 8 pm on 14 April. During this time the markets will remain closed. However the local train and bus will not be closed. These will be kept operational for emergency services. Companies making medical goods, medicines, masks, sanitizers will continue to function as before.

Exemption to IT companies including bank-petrol pumps

SEBI, banks, insurance companies, e-commerce, petrol pumps, data centers, IT companies will remain open despite the lockdown in the state. Hotels, restaurants will be able to continue take away and home delivery. The dhabas and restaurants along the way will remain open, but you will be able to work in the take away format from 7 am to 8 pm. Construction companies will also be allowed to work, but will have to make arrangements for employees to stay home on site.

during lockdown, cinema halls, theaters, auditoriums, amusement parks, gyms and sports complexes will remain closed. Shooting of films, serials, commercials will also be closed. The government has also ordered the closure of all places of worship, school-colleges, private coaching classes, spas, salons and beauty parlors till 7 am on May 1.

Financial assistance of 5400 crores to the poor in lockdown The
state government will give financial help to the needy people during one month lockdown. This will cost about 5400 crores rupees. Under this, these people will be able to get help ..

State Chief Minister Uddhav Thackeray on Tuesday night said that he will have to be strict to control the situation due to restrictions in Pandharpur elections . If the state’s health system is overburdened, then the trouble will increase. He said that voting will take place in Pandharpur in 2-3 days, so these rules will be applicable from there onwards.

CM Thackeray’s 5 demands from PM Modi
Uddhav Thackeray has sought help from Prime Minister Narendra Modi to make arrangements to deal with Corona in the state. This includes everything from oxygen supply to changes in the date of GST filing. Uddhav’s main demands are like this ..

Samples are being taken for the corona test of passengers at railway stations. The photo is of the CSMT station in Mumbai.

Rules are also strict regarding Ramadan

The effect of railway tightness to control the crowd is now visible. The stations are not crowded and social distancing is also visible.

7 patients died in 3 hours due to the depletion of oxygen in Nalasopara, 7 patients admitted to the
ICU in just 3 hours late in the night at Vinayak Hospital in Nalasopara, adjoining Mumbai, in the midst of ever increasing cases of infection. The family alleges that the oxygen stock in the hospital was exhausted and this led to the death of the patients. At the same time, it is clear from the hospital that all the patients who died were suffering from other serious diseases and when they were admitted they had an oxygen level of 30-40 percent only.

There is silence on the Gateway of India in Mumbai. There is a lot of crowd here on normal days.

For the first time since March, 52, 312 patients were cured, while in
Maharashtra 51,751 new patients arrived on Monday, 52,312 were cured and 258 people died. This was the first time after 9 March that the number of patients recovering was higher than the new patients. It is a matter of some relief, but the situation is not under control.

A day earlier, there were 63,294 cases of infection in the state. On Monday, 6,893 new cases were reported in Mumbai and 43 patients died. The total number of infections in the state has now increased to 34 lakh 58 thousand 996 and the number of dead has reached 58,245.

Just one day after the weekend lockdown, the state saw an almost 18.3% reduction in corona cases in just one day. There are now 5 lakh 64 thousand 746 active patients in Maharashtra. The government has issued strict guidelines regarding Gudi Padwa and Ramadan amid increasing infection cases. 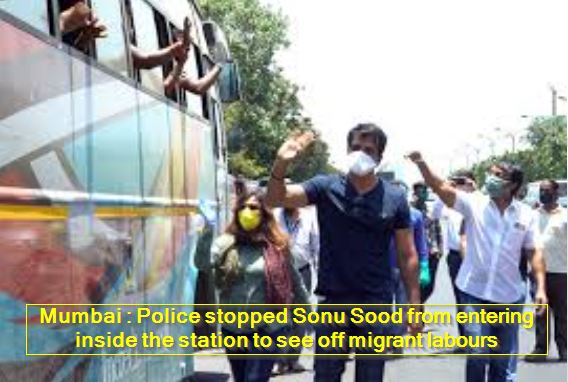 Mumbai : Police stopped Sonu Sood from entering inside the station to see off migrant labours

“I Am Immune” From COVID-19: Donald Trump