India has suspended mobile internet services in three areas around the capital, Delhi, where farmers are staging a hunger strike in protest at new agriculture laws.

The government said the shutdown would continue until Sunday night to “maintain public safety”.

Tens of thousands of protesting farmers have been camped out on Delhi’s outskirts for more than a month.

Talks between unions and the government have failed to break the deadlock.

The protest made international headlines on Tuesday when a tractor rally ended in violent clashes that left one protester dead and dozens of police officers injured. Some demonstrators stormed Delhi’s historic Red Fort and occupied it until police pushed them back.

On Saturday, the interior ministry said mobile internet services had been suspended at Singhu, Ghazipur and Tikri – the districts where farmers have gathered – until 23:00 (17:30 GMT) on Sunday.

Farmers’ leaders said Saturday’s one-day hunger strike had been timed to coincide with the anniversary of the death of independence leader Mahatma Gandhi.

“The farmers’ movement was peaceful and will be peaceful,” said union leader Darshan Pal.

Protesters themselves reacted angrily to the internet shutdown, Reuters reported. One farmer, Sandee Sharma, accused officials of trying to “create a panic” while another, Bhavesh Yadav, said it was “killing democracy.”

The government action comes amid rising tensions at the locations where farmers are based.

On Friday, clashes broke out at Singhu when a group of unidentified men approached farmers and reportedly told them to leave.

Farmers say the men threw stones at them and destroyed tents. Several injuries were reported. Indian media said the men were local residents who accused the protesters of disturbing the peace and damaging the local economy.

What are the proposed farming reforms?

The laws loosen rules around the sale, pricing and storage of farm produce which have protected India’s farmers from the free market for decades.

Farmers fear that the new laws will threaten decades-old concessions – such as assured prices – and weaken their bargaining power, leaving them vulnerable to exploitation by private companies.

Indian Prime Minister Narendra Mod has defended the reforms but the laws have been likened to a “death warrant” by unions.

Agriculture employs about half of India’s 1.3 billion population but the sector accounts for barely a sixth of the country’s gross domestic product (GDP) – which measures the value of goods and services produced in the economy.

Analysts say declining productivity and a lack of modernisation have shrunk incomes and hobbled agriculture in India for decades.

The government, meanwhile, provides farmers with subsidies, exempts them from income tax and crop insurance, guarantees a minimum price for many crops and regularly waives debts. 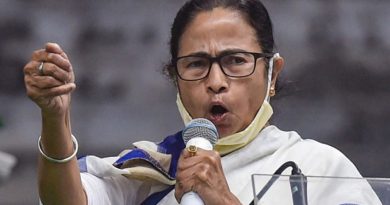 “What About Your Son”: Mamata Banerjee After Amit Shah Barb On Her Nephew