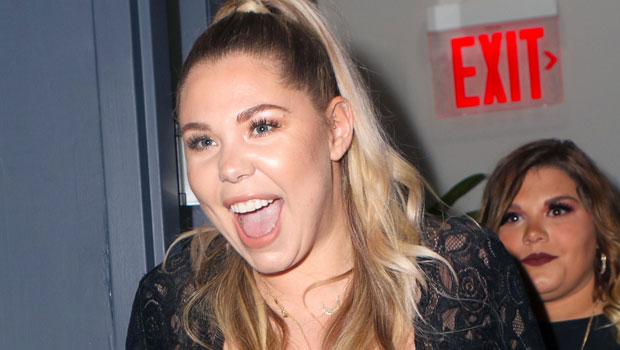 Kailyn Lowry already has her bathing suit body back less than six months after welcoming her newest son. She shared a photo with all four of her boys, while revealing the nickname she’s given her new baby.

It may be the middle of winter, but thank goodness for indoor water parks! Teen Mom 2 star Kailyn Lowry took her four sons to the Dreamworks Water Park in East Rutherford, NJ for a day of fun. The 28-year-old just welcomed her youngest son Creed Ramello Lowry-Lopez on July 30, 2020, and already she’s rocking a killer swimsuit body. The mother of four wore a black one piece with thin shoulder straps in photos she shared along with her boys on Jan. 25.

Kail also revealed that she has a nickname for Creed. In the pictures snapped in one of the cabanas overlooking the large pool, she wrote in the caption, “First WaterPark trip with all 4 & Mello’s first time in the water.” So she seems to be preferring a play on his middle name over Creed’s first name.

All of her youngsters seemed to show off their own unique personalities in the Instagram pictures. Oldest son Isaac Rivera, 11, stood smiling with his arms at his sides in all three snaps. Kail’s second born Lincoln Marroquin, 6, was such a cute mama’s boy, standing close to the MTV star as she lovingly wrapped her hand over his shoulder. He even flashed the “peace” sign in several of the snaps.”

Three-year-old Lux Lowry played on an orange chair while pointing at the camera. He even made “hang ten” signs with his hands. He had his hair pulled back in two braids, and it seems to be growing out nicely from when dad Chris Lopez had the tot’s long locks cut off behind Kail’s back and without her permission. Five-month-old son Creed looked a little camera shy, turning his head away in two of the three photos, but showed off his sandy blonde locks. That made fans cheer that Kail finally has a son who looks like her, as her three eldest children look just like their dads.

Fans were so impressed with how amazing Kailyn looked in swimwear less than six months after giving birth, and after four pregnancies. User @vtoflinski marvelled, “How do u look so good after just having a baby!!” while @hairbychar03 told her, “You look amazing for having 4 kids. Keep it up.” Fan @melissaabatedavin gushed, “Beautiful family! And love your swimsuit!!” as @lilly_wyatt_mommy told Kail, “You look amazing. what a mom.” Other fans were thrilled that Kailyn’s youngest son seems to be taking after her looks-wise, as all three of her older sons are mini-me’s of their fathers. Follower @kimberlinadeltoro wrote, “I love how your new son looks just like you!!! About time they don’t look like their dads! I hate when it looks like they gave birth to them!” as kellylewis3344 told her, “@kaillowry omg finally a baby that looks just like you.”

Others were so impressed she took all four boys out for a fun day at a water park, seemingly without help. Fan @ashleyydraghici cheered, “What an amazing mother!!!I have 2 & I find it difficult taking them places like that. You truly are a super mama!! while, @melmel1982 told Kail, “Idk how you do it. You are a rockstar. I have 1 and I get overwhelmed. Keep up the good parenting @kaillowry.”