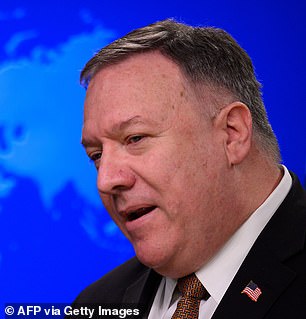 US secretary of state Mike Pompeo leads world condemnation of Kremlin for arresting Alexei Navalny – but Moscow hits back telling Americans: ‘Deal with problems in your own country’

By Rachael Bunyan For Mailonline and Wires

Leading politicians and diplomats called for the immediate release of Alexei Navalny last night after the Russian opposition figure was detained by security forces minutes after landing back in Moscow.

The United States, the European Union, several EU governments, Canada and a senior aide to US President-elect Joe Biden called for him to be freed, with some in the EU urging new sanctions against Moscow.

Navalny and his wife Yulia flew into Russia yesterday from Berlin for the first time since he was left fighting for life having been poisoned with the chemical weapon Noivchok five months ago.

The Kremlin had ordered Navalny to return saying his continued stay in Germany, where were was flown in a coma in August, breached a suspended jail sentence against him. The warned him he risked detention on landing.

But after Navalny was detained at Moscow’s Sheremetyevo airport last night, US Secretary of State Mike Pompeo led the condemnation of Moscow. Pompeo, who serves in the out-going Trump administration, said the US ‘strongly condemns’ he decision to arrest Navalny and called his detention ‘the latest in a series of attempts to silence Navalny and other opposition figures and independent voices who are critical of Russian authorities.’

‘Confident political leaders do not fear competing voices, nor see the need to commit violence against or wrongfully detain, political opponents.’

‘Mr. Navalny should be immediately released, and the perpetrators of the outrageous attack on his life must be held accountable,’ Jake Sullivan said in a tweet.

A statement from the UK’s Foreign, Commonwealth & Development Office said: ‘We are deeply concerned by the detention on 17 January of Alexei Navalny.

‘Instead of persecuting the victim of this terrible crime, the Russian authorities should investigate how a chemical weapon came to be used on Russian soil.’ Navalny’s allies have pointed the finger at Russian president Vladimir Putin (pictured) after the opposition leader fell ill, but the Kremlin has dismissed the claims

Human rights groups joined the calls, with Amnesty International saying Navalny had become a prisoner of conscience and accusing Russian authorities of waging ‘a relentless campaign’ to silence him.

‘Mr Navalny should be immediately released, and the perpetrators of the outrageous attack on his life must be held accountable,’ Biden’s national security advisor Jake Sullivan tweeted.

Russian foreign ministry spokeswoman Maria Zakharova took aim at foreign leaders in a Facebook post – telling them to ‘respect international law’ and ‘deal with the problems in your own country’. How did salt and pepper come together on (almost) every table in the world? | The NY Journal