After the failure of the eighth round of negotiations between the Government and farmers’ unions, all eyes are on the Supreme Court which will on Monday take up petitions challenging the farm laws and those seeking removal of farmers who have blocked key entry points to Delhi since November 26.

With both the sides refusing to budge from their respective stand, the eighth round of talks between agitating farmers and the Centre failed to break the deadlock on January 8.

As farmers’ leaders insisted on withdrawal of the three farm laws, Agriculture Minister Narendra Singh Tomar made it clear that the government will not repeal the laws even as it was ready to address their grievances. The next round of talks is proposed on January 15.

They have challenged the validity of the Farmers’ (Empowerment and Protection) Agreement on Price Assurance and Farm Services Act, 2020, Farmers’ Produce Trade and Commerce (Promotion and Facilitation) Act, 2020 and The Essential Commodities (Amendment) Act, 2020. They contended the farm laws were “discriminatory” and will expose marginal farmers to exploitation by big companies.

The second set of petitions is by Rishabh Sharma and others highlighting the plight of commuters entering the national capital due to continued blockade by agitating farmers. On Saturday, he filed an affidavit in the top court complaining that the farmers have blocked Noida Chilla Border, Tikri Border, Sindhu Border, Gazipur Border, Delhi-Rohtak National Highway, causing hardships to those entering Delhi from Uttar Pradesh and Haryana.

Citing the top court’s verdict on Shaheen Bagh protests that said public places can’t be blocked and occupied indefinitely, he said the protesters must be removed as they violated the court’s verdict.

The third set of plea is by the Consortium of Indian Farmers Associations (CIFA) — a Hyderabad-based farmers’ organization – which contended that the reforms were beneficial for growth of agriculture in India.

“We wish (to) submit that farm reforms are beneficial to enable increased income to farmers and growth of agriculture,” the consortium’s plea filed through CIFA advisor P Chengal Reddy said, demanding to be heard before any decision was taken.

A day later, the CJI had expressed concern over the possible spread of COVID-19 among the agitating farmers and asked the Centre if they were taking precautionary measures against the pandemic. “We are trying to ensure that COVID-19 doesn’t spread. Ensure guidelines issued are followed,” he had said. 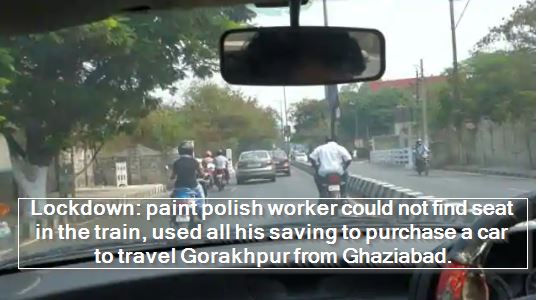 Lockdown: paint polish worker could not find seat in the train, used all his saving to purchase a car to travel Gorakhpur from Ghaziabad.

Manish Malhotra : My 30 Years In The Industry Stands For Patience, Resilience… He did this to avoid police beating in curfew