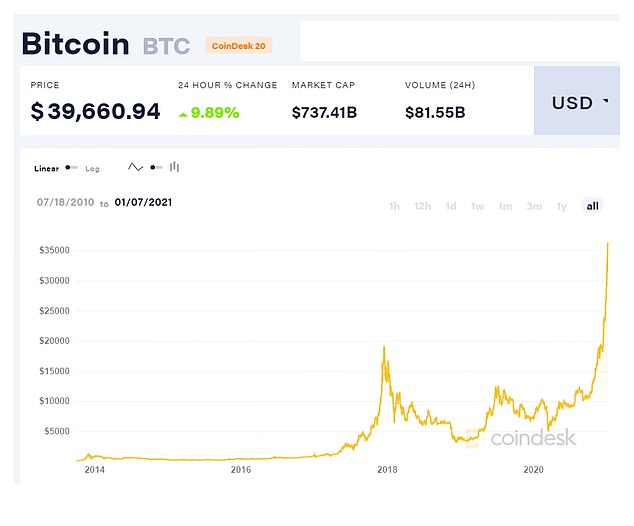 The total market value of all cryptocurrencies rose above $1 trillion for the first time on Thursday as Bitcoin surged to a record high.

Bitcoin has jumped more than 900 percent from a recent low of $3,850 in March, breaking $40,000 for the first time on Thursday as governments increase spending to blunt the economic impact of the pandemic.

The massive spending on stimulus has raised fears about rising inflation and U.S. dollar debasement, and investors are flocking to Bitcoin as a safe haven.

The cryptocurrency is also gaining traction with more mainstream investors who are increasingly convinced that Bitcoin will be a long-lasting asset, and not a speculative bubble as some analysts and investors fear.

Sergey Nazarov, co-founder of Chainlink, a decentralized network that provides data to smart contracts on the blockchain, said that there is a ‘lack of faith in traditional institutions that is driving this large rally towards cryptoassets.’

‘While outsiders may view the cryptocurrency industry being valued at over $1 trillion as an incredibly significant milestone, in actuality our space is still in one of its very early stages of development and growth,’ Nazarov said.

‘It’s leaving all other assets trailing in its wake, like it’s done year in, year out for the past decade.’

The market cap of all cryptocurrencies rose 10 percent to $1.042 trillion on Thursday, data from CoinMarketCap shows.

Bitcoin accounts for around 69 percent of the total market cap of the total. It is followed by Ethereum with a 13 percent share.

Ethereum, which tends to trade in tandem with Bitcoin, also on Thursday hit its highest level since January 2018, touching $1,287.69.

Bitcoin has emerged as a rival to gold and could trade as high as $146,000 if it becomes established as a safe-haven asset, investment bank JPMorgan said on Tuesday. Bitcoin has emerged as a rival to gold and could trade as high as $146,000 if it becomes established as a safe-haven asset, JPMorgan said

‘Bitcoin’s competition with gold has already started in our mind,’ the Wall Street bank’s strategists said in a note, citing recent $7 billion outflows from gold and more than $3 billion of inflows into the Grayscale Bitcoin Trust.

That could mark a new dawn for the volatile digital currency after years as a play for speculators and retail punters.

‘Considering how big the financial investment into gold is, a crowding out of gold as an ‘alternative’ currency implies big upside for bitcoin over the long term,’ JPM said.

Bitcoin is likely to outshine gold as millennials become a more important component of the investment market over time and given their preference for ‘digital gold’ over traditional bullion, JPM added.

With a market capitalisation of $575 billion, the Bitcoin price would need a nearly fivefold jump to $146,000 to match the value of private gold wealth held in gold bars, coins or exchange-traded funds, the bank’s note added.

JPM strategists said the upside is conditional on the volatility of bitcoin converging with that of gold in the longer term.

Though JPM sees the possibility of ‘current speculative mania’ propelling bitcoin to between $50,000 and $100,000, it warned that such levels would prove unsustainable until its volatility levels out.

‘We note that the spectacular bitcoin rally of the past few weeks has moved bitcoin into more challenging territory, not only in terms of its positioning backdrop, but also in terms of its valuation,’ the bank said.