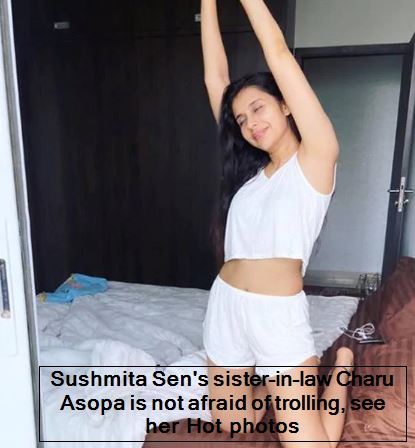 Sushmita Sen’s sister-in-law Charu Asopa is enjoying herself at home these days, giving herself time. Charu is very active on social media, she also reaches her personal life through social media. But due to this, she gets trolled many times.

Charu posts several types of social media. She also expresses her views with impunity. But the way he is trolled many times, he is surprised. Now Charu has a special conversation with Aaj Tak in this regard.

In a special conversation with Aaj Tak, Charu said, “I try to stay connected with my fans through social media, it also brings negative comments to trolls but I ignore negative things, I feel a bit bad but I It does not allow itself to dominate and I feel that trolls are people who are not happy themselves, so they cannot see anyone else happy.

If Charu believes, she gives more attention to positive comments and ignores negative comments. According to her, because she concentrates, she does not have much problem. She feels very calm because of meditation.

Let me tell you that recently Charu trolled on one of his posts where he wore a pink top. He received a lot of negative comments on him. But even then Charu did not pay much attention to the negative comments.

Currently Charu is running her own YouTube channel at home called Dhun Charu Ki. In this, she keeps posting her cooking skills, makeup tips and many other things. Every video of Charu is going viral.

We want to know about his future plan from Charu, to which he said, “I am waiting for a good role because in my 10-year career I have played every role, daughter-in-law, innocent girl and even played negative character. Now I want something different, I wish that if I get a role to see my dance, then I can because I have learned in Kathak and at the moment I am waiting for a good character. ” Tusshar Kapoor on Laxmii’s title change: Hope this lays to rest anything that has upset or confused anybody with regards to title