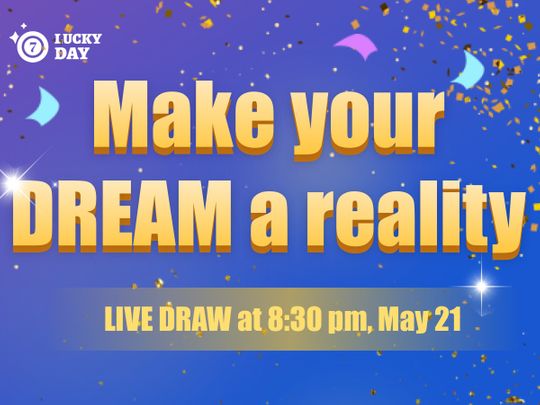 Is there a more appropriate name for a draw than Lucky Day? Taking place every second Friday on the UAE-based cash prize-winning online platform, Dream Island, Lucky Day offers participants who spend Dh50 a chance to win their share of a Dh10-million prize pot.

We explain what you need to do to play, ask previous winners about their experiences and look at what else Dream Island has to offer.

Lucky Day – how does it work?

Dream Island’s flagship event, Lucky Day takes place with a livestreamed draw at 8.30 pm every second Friday of the month. It’s not called Lucky Day for nothing – the game’s mechanics has a direct correlation with days and months. Players choose their five lucky numbers from a set of 31 – correlated to each day of the month – as well as one from 12 numbers (each stands for a month of the year).

If you’re not sure what to pick, the platform offers an AutoPick option, which is also present in its other games.

To win, your numbers need to be pulled during the draw, which is streamed on the Dream Island website, YouTube and Facebook channels. Should you get really lucky and see every one of your numbers pulled out of the pot by the presenter, congratulations – you take home a share of the Dh10-million prize, which is evenly distributed among all the winners who were equally lucky.

It’s not an all-or-nothing deal – depending on various permutations, players have the opportunity to win prizes worth one-, two-, three-, four-, five- and six-figure sums.

Lucky Day is proving popular across a diverse base of UAE-based players. Savio D., a Portuguese salesman, is a big fan and felt he could trust the Dream Island platform after reading about it on Gulf News. Meanwhile, Sajjad, from Pakistan, and Konpreng, from Indonesia, both discovered Dream Island on the ToTok social network. Their favourite game? Lucky Day.

“The best moments in our job”

Nothing makes the Dream Island team happier than seeing winners sharing their success stories on social media. “This makes us more determined to expand and develop more games,” says a spokesperson.

The creation of new play-to-win concepts and security of user funds and privacy are the Dream Island team’s top priority, she adds.

Whether it’s Lucky Day or Hulm, the multi-themed digital scratch-and-win game, the team strives to ensure every game on the platform is equally visible on its home page. While the spokesperson says Dream Island receives plenty of organic traffic through repeat visitors – especially those who have previously won – there are frequent incentives in place for new players willing to try their hand.

For example, players logging in to the platform for their first time will receive Dh50 of playing credit on a spend of Dh1. The Dh50 is divided into Dh9 cash; Dh25 towards Lucky Day; Dh7 on Dream 5; Dh5 for Hulm; and Dh4 for Dream Island. This way, new users are encouraged to invest equally in different activities on Dream Island, rather than placing all their playing eggs into a single game’s basket.

“We prepare a well-studied package of promotions and offers for all our users; some are exclusively for new users and some are for all users,” explains the Dream Island spokesperson.

Ultimately, it’s the people playing who make the platform, she says. The nature of the games and their reliance on users picking the right numbers have seen the platform’s comment sections buzzing, with fans offering their best tips and tricks on how to come out on top during various games such as Hulm.

Friday Carnival Get free coupons to purchase a ticket with up to 35 per cent off. For example, if you buy two lucky day tickets, you could claim and use Dh30 discount coupon to improve your Dh10 million big prize-winning chance.

Lucky Day Sharing Purchasing a Lucky Day ticket generates a unique link. Share it with your friends and you’ll get a Dh5 bonus for each one who buys a ticket of their own through link you shared, which can stack up to Dh25 cashback if five friends buys theirs through your link.

1 for 50 Each customer gets Dh10 back by recharging Dh1, with coupons worth a total of Dh50 that can be spent across playing different games.

This content comes from Reach by Gulf News, which is the branded content team of GN Media.