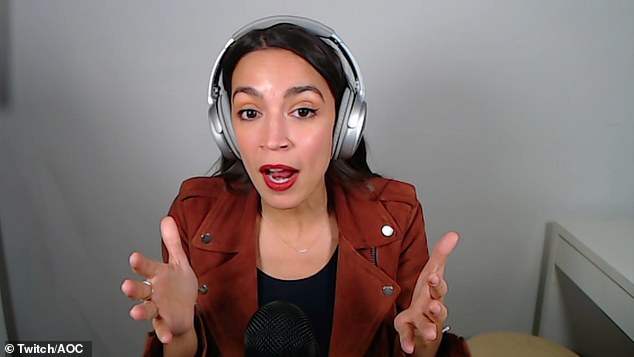 Reddit co-founder Alexis Ohanian has backed the WallStreetBets users on his site in their battle against hedge funds, telling Rep Alexandria Ocasio-Cortez in an interview that short selling is a ‘bulls**t way to make money’.

Ohanian, who is married to tennis superstar, Serena Williams, denounced Wall Street tycoons and their short-selling as a ‘weak way’ to make money because it involves betting on businesses to fail.

Gangs of armchair investors, using a Reddit page called Wallstreetbets to organise, have been buying up failing stocks in companies like GameStop in order to hurt predatory investors who have bet on short positions, costing the hedge funds billions.

‘I actually think hedge funds or just even the practice of short selling is a bulls**t way to make money,’ Ohanian said.

‘But to do it in such an insanely leveraged way where you’re—you know, they were able to reach numbers where they weren’t able to short more shares than even existed,’ he added, while referring to Reddit group WallStreetBets. 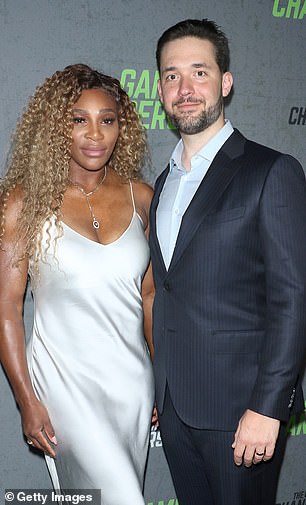 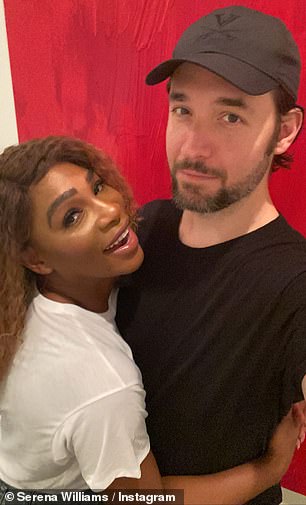 Ohanian, who is married to tennis superstar, Serena Williams (together left and right), denounced short-selling as a ‘weak way’ to make money because it involves betting on businesses to fail

Ohanian continued: ‘I think so many Americans are hoping that the little guys, the ones who normally end up picking up the tab, are the ones who will ultimately continue to be empowered and supported and not the banks, not finance, not Wall Street.’

Ohanian made his comments about the controversy shortly after Robinhood and online brokerage Interactive Brokers restricted trading in several social media-driven stocks that had soared this week, including GameStop.

The issue pits hedge funds and other short sellers against retail buyers, many motivated by commentary on sites such as Reddit.

Lawmakers from both main parties in Congress, including AOC and Republican Ted Cruz, criticized the decision by Robinhood to restrict retail trading. Robinhood did not respond to requests for comment.

Ocasio-Cortez and Cruz agreed on Thursday that Congress needed more information about Robinhood’s decision to restrict retail trading in shares of GameStop and other stocks that have experienced dramatic gains this week attributed to social media-driven trading. Ocasio-Cortez, slammed Robinhood for enforcing restrictions on GameStop shares, saying it was ‘unacceptable’ and that Congress needed to know more about Robinhood’s decision ‘to block retail investors from purchasing stock while hedge funds are freely able to trade’

How does ‘shorting’ a stock actually work?

Stocks typically benefit investors if the price goes up – they buy stock, the price increases if the company does well, then they sell it for a profit.

But there is a way to reverse that process. Known as ‘shorting’, it involves placing a bet against a company that means a trader makes money when the value goes down.

To do this, a trader borrows stock off a broker, usually for a fee, which they immediately sell – but with a clause saying that they have to buy back that stock by a certain date and return it to the broker.

If the value of the stock goes down, then the trader buys it back for less than the sale price, returning the stock to the broker along with the fee and keeping the rest of the money for themselves.

But, if the stock price rises, they will be forced to buy for more than the sale price, making a loss in the process.

While this sometimes happens by accident, other traders can deliberately boost the price in a process known as a ‘short squeeze’ – which is what Reddit did.

This benefits the ‘squeezers’ because they know that at some point, the short-sellers will be legally obliged to buy back their borrowed stocks, driving the price up further.

It also inflicts heavy losses on the short-sellers, since the amount they lose is tied to the amount the stock rises – they are effectively ‘punished’ for betting against the company, which is what some Redditors appear to be interested in.

Ocasio-Cortez,  tweeted the restriction was ‘unacceptable,’ adding Congress needed to know more about Robinhood’s decision ‘to block retail investors from purchasing stock while hedge funds are freely able to trade the stock as they see fit’.

Republican Senator Mike Lee also joined the critics as did US Representative Ro Khanna, a Democrat.

Khanna said in a statement ‘while retail trading in some cases, like on Robinhood, blocked the purchasing of GameStop, hedge funds were still allowed to trade the stock. We need more regulation and equality in the markets’.

He added: ‘We’re done letting hedge fund billionaires treat the stock market like their personal playground, then taking their ball home as soon as they lose.’

US Representative Rashida Tlaib, a Democrat, called the restriction ‘beyond absurd’.

Tlaib urged on Twitter that Congress ‘have a hearing on Robinhood’s market manipulation’.

‘They’re blocking the ability to trade to protect Wall St. hedge funds, stealing millions of dollars from their users to protect people who’ve used the stock market as a casino for decades,’ she added.

Ocasio-Cortez said the House Financial Services Committee investigation should not be limited to Robinhood but ‘should examine any retail services freezing stock purchases in the course of potential investigations – especially those allowing sales, but freezing purchases’.

Coordinating on forums such as Reddit’s Wallstreetbets, the small investors forced hedge funds to unwind short positions that had bet on the decline of shares in companies such as GameStop and American Airlines.

That activity resulted in a short squeeze that sent the shares soaring.

GameStop, the video game retailer whose 1,700 per cent rally has been at the heart of the slugfest in the past week, initially rallied to more than $480 a share on Thursday, Refinitiv data showed. It closed down around 44 per cent at $193.60

Robinhood has started selling users’ stock without their permission and has been hit with a class-action lawsuit accusing the stock trading app of siding with Wall Street hedge funds by blocking investors’ ability to buy shares of GameStop following a Reddit-fueled rally.

Robinhood on Thursday blocked its users from buying stock in GameStop and 12 other companies, citing ‘recent volatility’ after a rally that saw shares in the video game retailer soar 1,700 percent this month.

The company said that it would begin allowing ‘limited buys’ for some of the banned shares on Friday. But it moved further with its restrictions on Thursday afternoon, saying that it would forcibly close certain stock positions if they were deemed ‘too risky’ and involved large amounts of borrowed funds.

Robinhood users shared notifications they received saying that their shares of GameStop had been sold without their permission. A Robinhood spokeswoman declined to comment when reached by DailyMail.com.

Following the trading ban, which was joined by Interactive Brokers and TD Ameritrade, GameStop shares whipsawed, and closed down 44 percent, even as the Dow rallied 300 points with the day-trading restrictions soothing large investors.

Robinhood said in statement said that its mission is to ‘is to democratize finance for all’ and that its platform ‘has helped everyday people, from all backgrounds, shape their financial futures’. 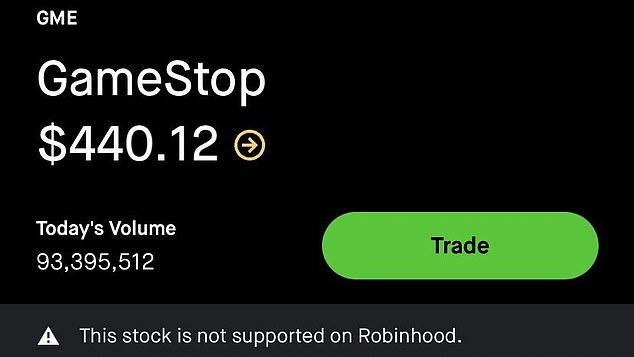 Robinhood on Thursday morning displayed an alert telling users who owned GameStop that they could sell the stock, but not buy it. Other users saw the message ‘This stock is not supported on Robinhood’ 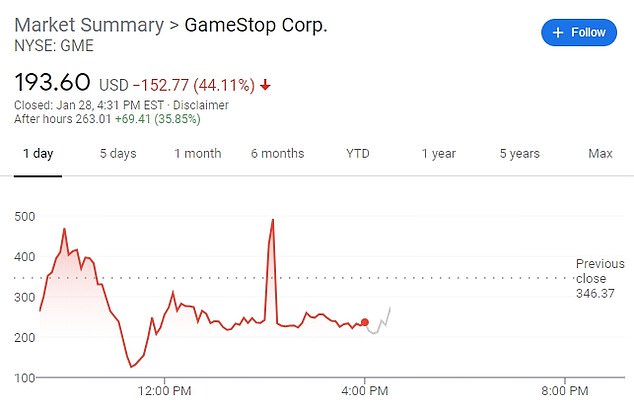 GameStop shares whipsawed, and closed down 44 percent, after the Robinhood ban By noon, a federal class action lawsuit had been filed against Robinhood in the Southern District of New York over the move to halt certain trades

But Robinhood’s buying halts drew fierce backlash from members of the Reddit forum WallStreetBets, which had promoted the stock, and the Senate Banking Committee announced it would hold a hearing on the matter.

An estimated half of Robinhood’s 13 million users reportedly own stock in GameStop, and they responded to the trading restrictions with a flurry of class action lawsuits and complaints to the Securities and Exchange Commission.

Outrage at Robinhood appeared to briefly unite the country, with GOP Senator Ted Cruz, Don Trump Jr, and Democrat Reps. Alexandria Ocasio-Cortez and Rashida Tlaib all blasting the app for shutting down trades while hedge funds remain free to buy and sell stocks as they please. 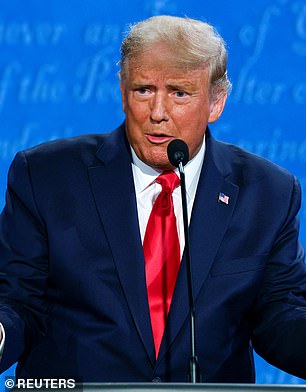 US Election 2020: Trump and Biden clash over coronavirus in debate These are the 7 fruits with the most protein, ideal for losing weight and strengthening the immune system | The State 6 reasons why you should eat more celery: say goodbye to those extra pounds | The NY Journal