More than a million people in England still had coronavirus last week despite the draconian lockdown, official data shows — as the Covid symptom tracking app said the rate of decrease is starting to ‘run out of steam’.

An Office for National Statistics report published today estimated that 1.01million people were carrying the disease at any given time in the week ending January 23, the equivalent of one in 55.

But there were still large regional disparities, with one in 35 thought to have had the virus in London compared to one in 85 in Yorkshire and one in 70 in the East Midlands.

It is the fourth week in a row the ONS believes more than a million people in England were infected with Covid on any given day and today’s figure is down only slightly on last week’s estimate of 1.02million.

There are fears the super-infectious Kent variant, which is thought to be at least 50 per cent more transmissible than the original strain and 30 per cent more deadly, has made lockdowns less effective.

The ONS estimates around one in 70 people were carrying the virus in Wales last week, one in 50 in Northern Ireland and one in 110 in Scotland. Statisticians said cases had ‘levelled off’ in all three nations.

Separate data from from ZOE COVID Symptom Study found daily new cases are falling in all regions of the UK, ‘but the pace of decline has slowed down’.

The researchers estimate there are currently, 28,645 daily new symptomatic cases of Covid across Brtain on average, compared to 34,133 a week ago, a decrease of 22 per cent. Their estimates are lower than the ONS’ because they only look at symptomatic cases, who make up a minority of overall infections.

Since the peak of 69,000 daily new cases around the 1st January, cases have fallen by 60 per cent, according to the app. But Professor Tim Spector, the lead researcher behind the study, said: ‘Cases are still falling which is good news but there are signs that this 60 per cent decrease is running out of steam.’ The ONS data shows London continues to have the highest proportion of people likely to test positive for coronavirus in any region of England, with around one in 35 people in private households estimated to have had Covid-19 between January 17 and 23. This is unchanged on the estimate for January 10 to 16.

The other estimates are one in 55 people in the West Midlands, one in 60 in eastern England and south-east England, one in 70 in the East Midlands and south-west England, and one in 85 for Yorkshire and the Humber.

The ONS study is based on 173,508 swab tests sent to random homes across the UK over the past two weeks. They returned 3,293 positive tests, which the ONS then uses to extrapolate to the rest of the country using mathematical modelling.

The study does not include people staying in hospitals or in care homes, where Covid is still believed to be rife, which means its findings may underestimate the true scale of the current crisis.

Meanwhile, the Covid Symptom Study, led by King’s College London, is based on 16,353 swab tests done between January 10 and January 24.

It found the highest risk areas in the UK are currently Liverpool, where one in 68 are estimated to have Covid, London (one in 74) and Birmingham and Black Country (one in 96).

Tim Spector OBE, lead scientist on the ZOE COVID Symptom Study app and an epidemiologist at King’s College London, said: ‘Cases are still falling which is good news but there are signs that this 60 per cent decrease is running out of steam with some areas already starting to see R values creep back up to 1.0.

‘With the number of active cases (prevalence) at 520,000 and falling slowly, the risk of infection remains high and so it’s important to continue with social measures to reduce transmission.

‘We need to remember there are other early symptoms of the virus such as headache, fatigue and sore throat. If more people self-isolated and got tested when experiencing these we’d be able catch people earlier and reduce transmission.

‘People reporting these symptoms in the ZOE app, not just the classic three, will be offered a test. Hospital admissions are now easing slightly, which is good news and is in line with our predictions as cases have been falling for the last three weeks.

‘With the continued roll out of the vaccine to hospital staff, the older and most vulnerable, we are hopeful that we will start to see a real impact on infection levels and hospital pressure soon.’ 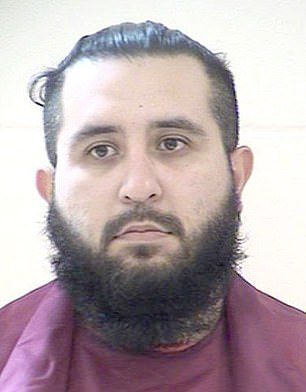 New Hampshire man, 30, ‘killed wife’s lover, 25, before forcing her to decapitate him’