GameStop shares have risen over 600% so far this year.

The exponential rise in the shares of GameStop in the last two weeks that have been driven by users of Reddit, have created more than $ 2.2 billion in wealth for the three largest individual shareholders of the company.

Although it may not last long, the huge shareholder gains generated in so little time give new meaning to the richness of the digital age.

Investors under the age of 24 looking to make a quick buck have caused securities of GameStop skyrocketed on Tuesday for the fourth consecutive session, reaching an increase of one 135 percent to finish close to $ 148 dollars.

After the market closed on Tuesday, Elon Musk wrote in a tweet that contributed to the shares of the video game store GameStop they soared 134 percent but have risen more than 300 percent. His comment was “Gamestonk!” and it was powerful enough to animate the traders that meet at the site of Reddit to boost the rise in the shares of GameStop.

Another tweet from Musk It also impacted shares in Etsy, an e-commerce company, which rose 10 percent after the Tesla CEO tweeted comments after purchasing a hand-knitted beanie for his dog on the website. According Business Insider shares rose 2.2 percent within minutes of the release.

For his part GameStop It has risen more than 600% so far this year after the appreciation caused by investors who have bet that the shares of the video game company will fall at some point, according to a report from CNBC.

Short sellers often borrow shares to sell in order to buy them back later when the price falls. The premium they pay to borrow the shares reflects the demand for them.

Traders on Reddit have also organized to buy shares in other struggling companies such as BlackBerry, Bed Bath & Beyond, Macy’s, AMC and Cinemark Holdings they have risen between 100 and 250% so far this year. Global multi-billion dollar putts could be at risk as amateur traders question bearish positions of influential funds, inflate prices and leave professionals staring at losses.

The rise in the shares of the video game store GameStop created an effect that is having repercussions in the US markets that is spreading to other markets.

Who has won with GameStop?

The main beneficiary of the rise in GameStop it is Ryan cohen, co-founder of Chewy, which invested in GameStop last year to help the company accelerate its Internet momentum. Cohen began buying shares of the video game retailer in August and increased his position in December. Invested a total of $ 76 million for a stake of around 13% of the company.

At the close of the market on Tuesday, Cohen’s 13% stake was worth more than $ 1.3 billion. Therefore, in the last two weeks, Cohen’s net worth increased on average by about $ 90 million a day, or almost $ 4 million per hour.

The other big winner of GameStop it is Donald foss, 76, founder and former CEO of Credit Acceptance Corp, a subprime auto lender. Foss, who lives in Michigan, bought 5% of GameStop last February for about $ 12 million. His stake is now worth more than $ 500 million, bringing his net worth to almost $ 2 billion, according to Forbes.

The CEO of GameStopGeorge Sherman has seen his 3.4% stake in the company grow to a value of about $ 350 million. So far none of the three major shareholders appear to have sold shares.

GameStop continued his ascent on Wednesday. More than doubled and hit a new high of $ 354.83 dollars per share. What is the frozen pizza you should never buy | The State 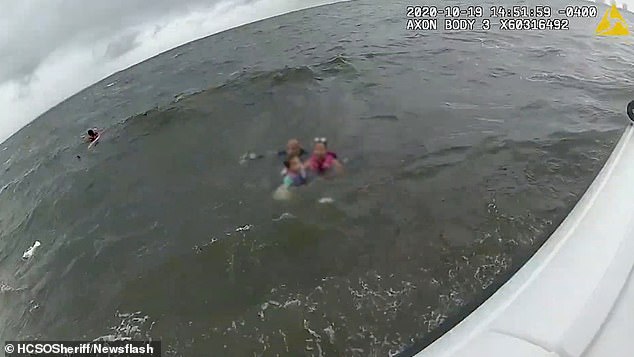 US marines rescue stranded family after boat capsized in Florida