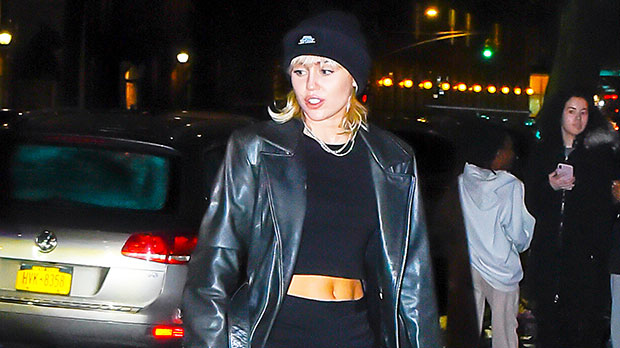 Miley Cyrus looks rocker chic in a new mirror selfie she shared to Instagram on January 26. The singer, who’s gearing up for her SBLV pre-game gig, donned a pair of yellow tinted sunnies and silver jewelry.

Miley Cyrus looks stunning in a new photo she shared to Instagram Stories on Tuesday night. The Grammy-nominated singer, 28, snapped a quick mirror selfie while dressed in an all-black ensemble, which included a leather jacket, printed t-shirt and bike shorts. She accessorized with a pair of cool, oversized sunglasses and silver rings and necklaces. Miley, who sported a black manicure, wore her hair in an up do’ and donned blonde bangs.

The “Prisoner” singer will take her talents to Super Bowl LV, where Tom Brady‘s Tampa Bay Buccaneers and Patrick Mahomes‘ Kansas City Chiefs will face off in Tampa, Florida on February 7. The NFL was first to announce the news, via Twitter on January 24, that Miley will perform at the first-ever “TikTok Tailgate” — a pregame event for 7,500 vaccinated health care workers, all of which were selected by the 32 NFL teams from their very own communities. Miley’s performance will take place at Tampa’s Raymond James Stadium at 2:30 PM ET, and it will air on both TikTok and CBS.

It’s an exciting time for Miley, whose latest album Plastic Hearts is the No. 1 rock record in the country. She celebrated the major milestone in a post on Instagram, alongside a photo of herself rocking a green fur vest in front of Star Nails Spa. “You did it again! Plastic Hearts has spent 6 weeks as the #1 rock album in the country,” Miley wrote in the caption of her post, which was shared on January 20.

“This is all because of YOU supporting my record! I don’t forget! I really f**king appreciate it! When all this SH*T we’re goin thru is her story imma celebrate by taking my biggest fan to get a FRESH SET HUNTY,” she continued, adding, “Shine Bright. Shine far. Don’t be shy. Be a star baby. Love y’all 5EVR!”