Halsey fans were in for more disappointment after the pop singer canceled her upcoming Manic World Tour due to the ongoing coronavirus pandemic.

In a statement shared to social media, the You Should Be Sad singer said she need to ‘prioritize’ the ‘health and safety’ of her fans.

The 26-year-old songstress originally performed part of the tour in February and March 2020, but she had rescheduled the remaining US dates for June and July 2021.

Canceled: Halsey, 26, announced that the second half of her Manic World Tour had been canceled due to the ongoing pandemic on Friday; seen in 2019

Despite being several months in the future, it’s unlikely that enough people would be vaccinated for the coronavirus by mid summer.

The current vaccine rollout has been particularly slow, and CDC officials have estimated that the US may not have enough people vaccinated to achieve herd immunity until well into the fall.

‘Despite our absolute best efforts, there is no guarantee I’ll be able to tour the currently scheduled dates,’ Halsey wrote. ‘I miss seeing all of you in the crowd every night more than anything, but I need to prioritize your health and safety.’

She added that the Manic tour ‘was supposed to be my most unique yet for a number of reasons.’

‘I was really looking forward to sharing this chapter of my life with you in the ways I best know how. But for now, I am dreaming of days where we can all be together again.

‘I love you and we will adapt and grow and find new ways to connect despite the circumstances,’ she concluded. Too risky: She wrote that ‘safety is a priority’ on Twitter. The new dates would have been over the summer, but her immunity likely won’t be achieved via vaccines until the fall Moving on: ‘I was really looking forward to sharing this chapter of my life with you in the ways I best know how,’ she concluded her note

In her tweet sharing the news, Halsey added, ‘Safety is the priority. I wish things were different. I love you. Dreaming of seeing your faces again.’

Fans should be receiving emails on how to receive refunds, or they can contact the point of purchase.

In the early days of the pandemic, several concerts and tours were delayed, rather than canceled, in order to hold out on giving refunds.

Halsey’s announcement of her canceled tour came just days after the one-year anniversary of her Manic album, which was released on January 17, 2020.

The rollout was marred when the pop star inadvertently called for the collapse of One World Trade Center after she received a 6.5 rating from the music review website Pitchfork, which is generally considered a mildly positive rating among readers. Anniversary: The tour cancellation came just over a year after Halsey released her third LP Manic. The release was marred after she accidentally called for the destruction of the World Trade Center Oops! After getting a middling review from Pitchfork, she said she hoped the offices of the publication, which is located in One World Trade Center, would ‘just collapse already’

After reading the review, which critiqued her ‘painfully stretched ballads’ and ‘overly sanitized rhythms,’ Halsey tweeted: ‘can the basement that they run p*tchfork out of just collapse already.’

Once fans informed her that the Condé Nast publication’s offices are located in the World Trade Center building she quickly deleted the tweet and apologized.

‘ABSOLUTELY deleted it upon realizing this. was just trying to make a joke! Intended zero harm. Just figured I could poke at them back with the same aloof passive aggression they poke at artists with! Clearly a misunderstanding <3,’ she wrote, before swiftly deleting the apology as well.

Back in March, before her US dates would have commenced, Halsey wrote on Instagram that her Manic World Tour would ‘mark the end of me touring for a very long time,’ though she didn’t specify if that was due to exhaustion or other factors. Taking a break: Back in March, before her US dates, Halsey wrote on Instagram that her Manic World Tour would ‘mark the end of me touring for a very long time’; seen in 2019 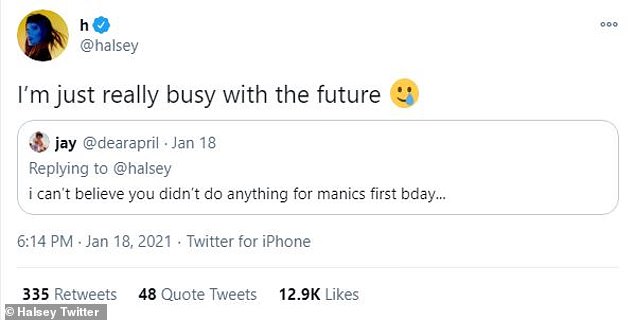 Plenty on her plate: She said she was ‘just really busy with the future’ when a fan asked why she hadn’t done more to mark Manic’s one-year anniversary

Earlier this week, one of Halsey’s fans noticed she hadn’t done much to promote Manic on its one-year anniversary.

‘I’m just really busy with the future,’ she replied.

However, the Closer singer did share a time-lapse clip of herself painting a version of the album cover on a massive canvas that required a ladder to reach the top of.

‘It took me almost 8 hours and I cherished every second,’ she wrote.

Another tweet from the same day listed all of the countries were Manic had been certified gold or platinum. Monumental: However, the Closer singer did share a time-lapse clip of herself painting a version of the album cover on a massive canvas that required a ladder to reach the top of It’s a hit! Another tweet from the same day listed all of the countries were Manic had been certified gold or platinum 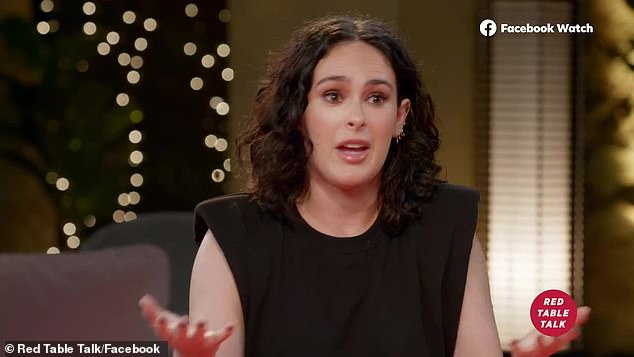