Jan. 11, 2021 — The pandemic has revealed a new generational divide that has baby boomers and their children at odds over safety, and grandchildren are often a point of disagreement.

Gen Xers have complained during the pandemic that their “boomer” parents aren’t taking COVID-19 seriously enough and think that they need to protect them and/or their children.

“I hear people who complain that their father will not wear a mask or socially distance or quarantine. They’re not willing to have that grandparent be around their children,” says F. Diane Barth, a licensed clinical social worker and psychotherapist in New York City and Massachusetts.

When parents say they’re not visiting to protect the grandparents, the elders often “get upset because they don’t feel they need to be protected. There are some boomer parents who do not believe the danger is real or that they’re in danger,” says Barth.

But it works both ways. Some boomer parents are being careful and have decided against visiting the grandchildren in person because they’re going to school.

just trying to remind those with sweet grandparents how lucky we are that they are still around, and how important it is to stay connected to those who covid has isolated the most ❤️

Other boomer grandparents feel that it’s safe to visit in person but complain about the rules their children have imposed.

David, 69, of New York City, who asked that only his first name be used to protect his privacy, wanted to visit his daughter and infant granddaughter on his birthday in November. But when his daughter told him that he could not come inside under any circumstance, he was surprised and upset. They have since met in a nearby park and shared the lighting of Hanukkah candles over Zoom.

Mike, a Midwestern boomer who spends his winters in Florida, recently complained that his daughter has asked him to get tested twice and quarantine before he can visit his young grandchildren. Mike also asked that only his first name be used.

Barth suggests that grandparents weigh whether visiting grandkids is worth these inconveniences. “My thought is to make the adjustments to follow through on what the children/in-laws want so they can be with their grandchildren.”

Although some grandparents may be tempted to lie and say they have quarantined, that approach can backfire and create trust issues, says Barth. “Even if you think your son or daughter-in-law is being neurotic, this is not the time to do that. If your kids don’t trust you, your relationship will be in trouble, even with the grandchildren.”

Barth advises parents to be “really honest with themselves about how realistic their expectations are.”

Then, communicate. “I think that being able to talk about the expectations and about the conflicts is everything. I talked to so many families over the holidays where the grandparents desperately wanted the children and grandkids to come over, and the parents thought that might not be a good idea.”

What worked was the parents saying, “We don’t want to disappoint you, but we don’t want the kids or you to be in danger; can we figure out how to do this safely?” says Barth.

Parents of newborns should be more protective about visitors, especially during the pandemic. “Newborns do not have the same immune capacity to fight off infections as older children. Their immune system is still developing, which is why they don’t get their first vaccines until they are 2 months old. That puts them at high risk of infections, and COVID-19 is no exception,” says Ashlesha Kaushik, MD, medical director of pediatric infectious diseases at UnityPoint Clinic in Sioux City, IA, and clinical assistant professor of pediatrics at the University of Iowa Carver College of Medicine.


Grandparents who want to visit newborns should start taking precautions at 36 weeks of the daughter’s or in-law’s pregnancy. This includes quarantine if they have traveled recently, wearing masks, social distancing, hand hygiene, and avoiding sick people and crowded places, says Kaushik, who is also a spokesperson for the American Academy of Pediatrics.

She recommends staying at the parents’ home if possible, to lessen contact with outsiders. If they want to hold the newborn, the grandparents should practice good daily hygiene — hand-washing, showering, and wearing clean clothes. They should never kiss the baby’s face, and “it’s a good idea to wear a mask. If these practices are followed, the newborn will be safe.”

Children over the age of 2 can be silent carriers of COVID-19 and in some instances become very sick with multisystem inflammatory syndrome in children (MIS-C) and infect their grandparents, says Kaushik.

Parents may be very anxious about letting their children meet in person with the grandparents because the consequences of COVID-19 are so high. “They may think, ‘I don’t want to be the one to give my mom COVID or have my child give it to her grandmother,’” says Charles Kalish, PhD, a developmental psychologist and senior adviser to the Society for Research in Child Development in Washington, DC.

I hate covid I just wanna hangout with my grandparents 😢

Parents of young children also have to weigh the health risk of having contact with the grandparents vs. the benefits of seeing the grandchildren.

Some parents agree to visits with the grandparents as long as they maintain their physical distance, which can be a challenge, especially for young children.

“If the risk of contact is small and the benefit of seeing the grandchild is high, then parents have to accept a certain degree of risk because social distancing will not be perfect in the beginning,” says Kalish.

“Even if they prepare the child ahead of time to not run up and hug the grandparent, the child may not remember to do that,” he explains.

If the parent can’t accept any risk, then “they can’t expect the interaction to go well because they will be so nervous, they may start yelling any time the child approaches the grandparent, or discipline the child,” says Kalish.

Although it may take a few reminders, Kalish reassures parents that children can learn new behaviors and that different rules apply to different situations.

Christine Brown, 65, of Aurora, OH, near Akron, lives about 20 minutes from her son, a police officer, and his wife, a nurse manager, and their two daughters, ages 6 and 8. Brown has her granddaughters over every Monday to help with their online elementary school classes.

“My son was worried about my risk of COVID-19 early on in the pandemic because I have Graves’ disease, an autoimmune disorder, but I reassured him that I was cautious,” says Brown.

She kept her physical distance from her granddaughters, and they all wore masks. Months later, they hug but do not kiss each other. “I think I got tired of being afraid, and they’re such lovebugs.”

“If you’re retired, this is a great time for grandparents to ask parents, ‘How can I be helpful?’ For example, if a child is supposed to do math homework and the parents can’t be there to supervise, that could be done over Zoom, where the grandparent can watch the child do schoolwork,” says Kalish. 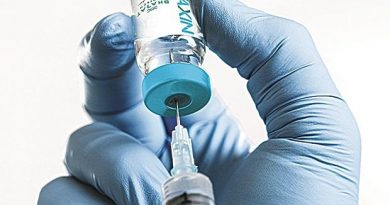 Decision On Covaxin Clearance Next Week, Says WHO