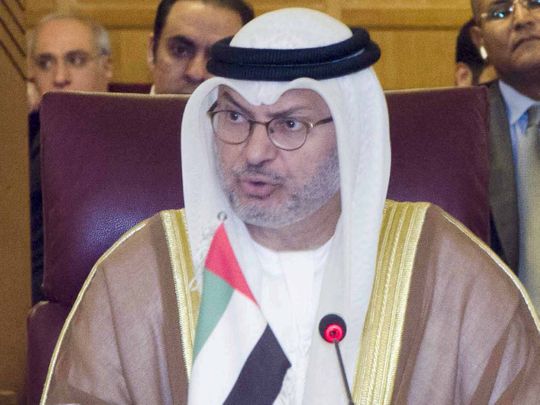 Abu Dhabi: Practical measures aimed at turning a new page with Qatar by Saudi Arabia, the UAE, Bahrain and Egypt such as the resumption of travel, transportation, shipping and trade ties will be realised within a week, a top UAE official said on Thursday.

“We want to do this sooner rather than later,”  Anwar Mohammed Gargash, UAE State Minister for Foreign Affairs told a virtual media briefing. “The UAE is extremely supportive and positive about AlUla Declaration,” he noted. However, he said, the UAE is realistic as any crisis will leave issues of trust, some will be easy to fix, but others will take a longer time.“We reiterate the GCC is more successful in its collective common market, rather than politically. So yes, it will take confidence-building. But we are turning a page on the crisis and starting on a positive note to build trust,” Gargash said.

The final communique of the GCC leaders’ summit in the Saudi city of AlULA Summit on Tuesday called for strengthening cooperation in combating terrorist entities, and an emphasis on the unity of the GCC. The statement affirmed “the solidarity of the Gulf states regarding any direct or indirect interference in their internal affairs, and members agreed that no country’s sovereignty be violated or its security targeted,” Gargash explained.

The AlUla summit resulted in turning the page on the past and looking forward to a future dominated by cooperation and respect in a way that preserves the security and stability of states, he stressed. “The communique is significant and an important step towards resolving a difficult and painful crisis. The crisis is coming to an end, which also depends on transparency and constructive approach,” by all, the minister said, adding that the announcement was “big news for the GCC and the wider Arab region.”

Saudi Arabia, the UAE, Bahrain and Egypt severed ties with Qatar in 2017, accusing it of supporting terrorism and interfering in the internal affairs of its neighbours.

In recent months, Kuwaiti and US mediators have intensified their efforts to end the Qatar crisis.

And on eve of the GCC Summit, Saudi Arabia agreed to reopen its land and sea borders, and its airspace to Qatar. Gargash said the UAE had full confidence in the Saudi approach to reach a comprehensive agreement rather than partial solutions as suggested by the US earlier.

Agreement should be respected

On what are the guarantees that Qatar will implement this deal, Gargash said, “AlUla Agreement is another agreement signed with Qatar and we hope that the severity of the last crisis will be a deterrent to us so that we do not fall again in another small or large crisis. The agreement should be respected, and we always abide by agreements. Genuinely, we want to restart and put the crisis behind us. AlUla Agreement broke the psychological barrier, but we need to work on it,” he said.

Dr Gargash said Al Jazira is a state-owned entity and effective tool of Qatari foreign policy and the issue is about its neutrality. Meanwhile, the cases filed by Qatar against GCC countries will be suspended and dropped. “These cases keep us busy, but were not successful,” he said.

On whether Qatar will join the Abrahamic Accords, Dr Gargash said the UAE position “has always been consistent .. it’s good for us and good for the region. The Accords have changed sentiments in the region, and we hope they will change the reality too.”

The AlUla Declaration emphasized the GCC’s goals and strengthened the bonds of friendship and brotherhood among the member states. Dr Gargash said the GCC collectively is in agreement to collective rapprochement, but with different approaches. “So bilateral working groups will work to fix different issues between the Gulf countries. Bilateral issues will be dealt bilaterally.” The emphasis now, he explained, is trust building.

The GCC has always been successful, he noted, in addressing common threats to regional security. Some issues with Iran, he said, will be dealt with politically and through de-escalation.” As for the Turkish presence in Qatar, Dr Gargash said the Arab countries want to see Turkey as a partner to all, that respects Arab sovereignty and Arab interests in general, and does not interfere in Arab affairs, such as in Iraq and Qatar.

“The more the GCC is closer together the more we can deal collectively with the geostrategic and geopolitical issues,” he stressed.

An important part of the need to resolve the Qatar crisis, he noted, is the necessity to resolve the GCC role in ensuring security and enabling it to play a larger role in trade, technology and investment in a competitive global environment.

For the UAE, resolving the issue is aligned with its view of the future, which include exiting the Yemen conflict, the successful fight against COVID-19, sending the Hope probe to Mars, and signing the Abraham Accords.