Late actor Irrfan Khan’s wife, writer Sutapa Sikdar, poured her heart out in an emotional birthday tribute to him. She reminisced about the time he would ask her why she celebrates birthdays and said that she has an answer for him now.

Starting her Facebook post with a few lines written by poet Sahir Ludhianvi, Sutapa wrote, “You never celebrated your birthday initially to my dismay then reconciliation then just a habit. You used to ask me when you were really young ‘why would you celebrate your birthday isn’t it one year less to your death day?’ of course these were conversation when you had just ventured out from home from conditioning to exploration so you would question everything.I don’t remember what I answered you but today I want to answer so listen.”

“Irrfan I celebrate the day because how would I have met you if you were not born ..so I celebrate the day the nakshatras the tithi the grahas the alignment of the universe on that particular day which welcomed you in this planet. And now that you are in the infinite did you get some answers you always seeked?,” she added.

Earlier in the day, Irrfan’s elder son Babil shared a heartfelt note for him, along with an unseen video. In the clip, Irrfan, Sutapa and their younger son Ayaan were seen trying to record a message for Babil.

Also read | When Ranbir Kapoor requested Hollywood star Natalie Portman for a picture, but she asked him to ‘get lost’

“You never identified with institutions such as contractual marriage and birthday celebrations. Perhaps, that is why I don’t remember anyone’s birthdays because you never remembered mine and never encouraged me to remember yours. It was just normal to us what seemed absurd from the outside, we celebrated everyday (bringing personal experiential authenticity to the cliche). On the occasion, Mamma would have to remind us both; but this time I could not forget yours if I tried. It’s your birthday Baba. Shoutout to all the technologically inept parents, notice that they did not finish saying that they miss me,” Babil wrote.

Irrfan’s final release, Anup Singh’s The Song of Scorpions, will hit the theatres this year. Last month, Babil shared the motion poster of the film, which advertised it as ‘a golden chance to witness the magician on the big screen for one last time’.

Manasi Parekh: I don’t connect with a lot of the content on TV these days 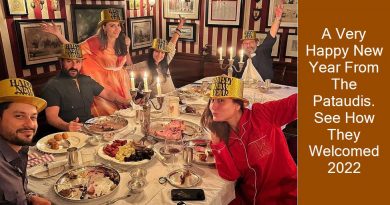 A Very Happy New Year From The Pataudis. See How They Welcomed 2022