A distraught father-of-two has revealed how Christmas was ruined when he was left scrambling to save his puppy’s life in front of his screaming children after the family Pug choked on a chew toy.

Kieran Elsby, of Bridlington, was left ‘in pieces’ and his children, Noah, six and Oliver, three, ‘traumatised’ after the family’s five-months-old Pug Peppa died on Christmas Eve after choking on a £7 Nylabone Puppy Triple Bone Starter Kit.

The dad bought the toy at his local Pets At Home store and claims he was told it was safe, but the family’s Christmas turned into a nightmare when Peppa died suddenly just after starting to play with the toy.

Kieran and his wife Ivy have claimed that in spite of numerous calls and emails with Pets At Home’s customer service, the toy is still available for purchase in-store.

Last night the store chain – which has a £111.3million operating income – hauled the product off its shelves while it continued to investigate.

The couple have also provided Femail with screenshots of customer reviews calling the toy a ‘choking hazard’ dating back as far as 2018.

Peppa, a five-months-old Pug, died on Christmas Eve after chocking on a chew toy in front of her owners Kieran Elsby of Bridlington, his wife Ivy Holt and their two sons, Noah, six and Oliver, three

People have called the toy a ‘choking hazard’ on the Pets at Home website, with reviews dating back to 2018

Kieran recounted how Noah bought the toy for Peppa with his pocket money as a present for the pooch, who had been cheering the family up during lockdown – with both boys being homeschooled since March because Oliver is vulnerable.

But moments after receiving her gift, Peppa chocked on the bone and was left gasping for air while Kieran desperately tried to save her.

The distraught father-of-two said he was left feeling like a ‘c*** dad’ after the ordeal.

‘I have regrets I couldn’t save her, and in the corner of my eye all I could see was my son in pieces. I couldn’t hold him as I was trying to save Peppa,’ he said. 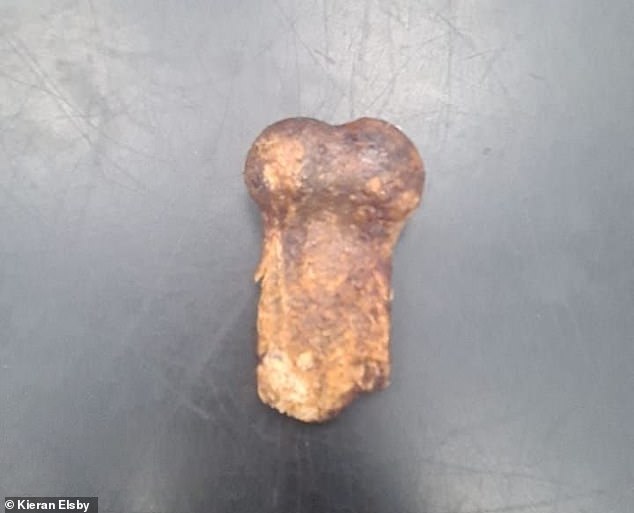 A picture of the bone bit that led to Peppa’s death. Kieran said the incident ruined the family’s Christmas Kieran’s eldest son with Peppa. The pup was only five-months-old when she died and had been helping the father-of-two’s sons during lockdown

The family got Peppa, their first dog, during lockdown, and she had cheered up Noah and Oliver.

Kieran said the ordeal, which was hard on the whole family, ‘ruined their Christmas’ and had a big impact on his two sons.

He said that Noah felt responsible because he had picked the toy that led to Pippa’s death, and offered to give all his presents back if it would bring the dog back.

Oliver was equally as distraught as his big brother, and Kieran said the pup had really helped his son with his development.

Kieran complained about his local Pets at Home staff, who he said showed no ’empathy’ or customer service skills when he and his wife visited the store following Peppa’s death.

This led Kieran and his wife Ivy to start an email correspondence with Pets At Home’s customer service, to convince them to take the toy off the shelf.

The couple have since discovered that many people had been complaining about the same toy for years,  with bad reviews going as far back as 2018, some of them calling it a choking hazard.

Some disgruntled customers said they had to take their pets to the vet for emergency operations after their dog swallowed the bone. One of Kieran’s children during a walk with Peppa by the seaside. The family are hoping to get their dog’s ashes to spread them on the waterfront

The complaints are live on the Pets At Home website and can be read by potential buyers.

Kieran claimed that the store took the wrong item off the shelves after the family complained, and that the toy was still on sale.

The father-of-two claimed the ‘complete lack of care,’ ‘moody and awkward,’ attitude from the store staff was ‘disgraceful.’

‘If we have to take legal action to take it off the shelf, we will do that,’ he said.

The family are now waiting to get Peppa’s ashes so they can spread them by the seaside.

A spokesperson for Pets at Home told FEMAIL: ‘We are extremely sad to hear of the death of Peppa and our thoughts are with the family.

‘This product is a worldwide brand which is sold by many retailers both on the high street and online.

‘We are, as a matter of urgency, investigating the product in conjunction with the product’s manufacturer, and will remove the product from sale until our investigations have concluded.’ Pints ordered by post, football at school but not at clubs: The odd new rules in new lockdown Boy, 16, is shot dead by cops after knife attack on police officer in Russia