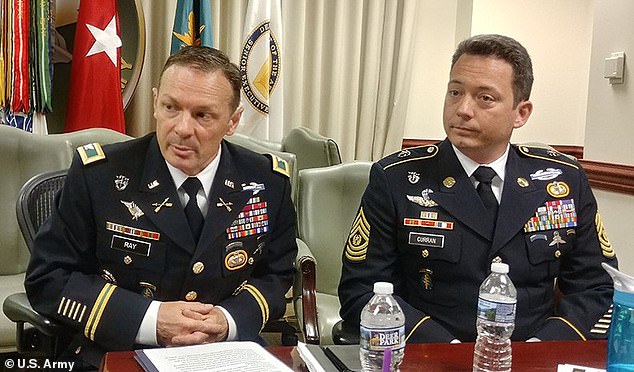 A Green Beret has been charged after he allegedly threatened to kill his wife in front of his three children and then held them hostage during a two-hour standoff with police.

Army Colonel Owen G Ray, 47, is accused of beating his wife, Kristen, on Sunday, December 27, in their home on Joint Base Lewis-McChord, Washington, in front his two youngest children while his eldest called the police.

When officers arrived on the scene, Ray – armed with a shotgun and two pistols – reportedly warned that if anyone tried to arrest him, he would kill them and himself, according to Military.com.

Ray let his wife and children go around 12.30am but did not surrender himself until around 2.30am, police say.

Army Colonel Owen G Ray, 47 (left), and his wife, Kristen, got into an argument after she believed him to be intoxicated, during which she hid in the bedroom of her two young children Ray allegedly retrieved a shotgun and two pistols from the garage and began beating his wife, threatening to kill her in front of the children. Pictured: Joint Base Lewis-McChord, Washington, where the Rays’ home is

According to a probable cause affidavit, viewed by Military.com, the incident began after Ray, a member of the Army Special Forces, and his wife got into an argument, in which she accused her husband of being drunk.

The affidavit states that Kristen became scared and hid in the bedroom of her 7-year-old and 10-year-old.

Kristen told police she heard her husband say: ‘Let’s do this’ and went to the garage to retrieve his firearms, Military.com reports.

After finding his wife and children, Ray allegedly started ‘shouting and swinging the gun around.’

When she threatened to call police, Ray is said to have become ‘enraged’ and aimed one of the guns at Kristen, threatening to kill her in front of the children, reported Military.com.

Ray allegedly then kicked his wife repeatedly in the face and chest while the younger children screamed at him: ‘Don’t kill mom! Don’t shoot us!’

At this point, around midnight on Sunday, Ray’s 16-year-old daughter dialed 911 and told dispatchers what was happening. 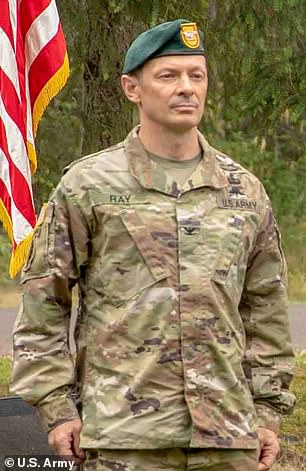 Ray (pictured) let Kristen and his three children go around 12.30am but threatened to kill himself if anyone arrested him before surrendering around 2.30am, it is alleged

Dispatchers reported being able to hear the younger children screaming over the phone.

Ray finally let his wife and children leave the bedroom, at which point they ran downstairs to the first floor, the affidavit states.

After officers arrived, Ray, his wife and their three children were still inside the house.

‘Ray could be heard saying, that law enforcement had surrounded the house so what choice did he have now and “You’re going to force me to kill myself,”‘ according to the affidavit.

He let his wife and young children exit the home at 12.33am and his eldest daughter soon followed, reported Military.com.

Officers say that while speaking on the phone with Ray, the colonel threatened to shoot any officers who tried to arrest him and himself.

‘He stated that he had killed a lot of people and he had no problem killing law enforcement if they made attempts to arrest him,’ according to the affidavit, viewed by Military.com.

At 2.22am, he finally surrendered and was arrested by officers with the Lakewood Police Department.

He was charged with one count of kidnapping in the first degree, two counts of second-degree assault, one count of felony harassment and one count of reckless endangerment.

Ray is currently being held at the Pierce County Jail on a $1 million cash or bail bond.

Court documents reveal Ray has a bail hearing scheduled for January 4 and has been ordered to reappear in court on January 11 with his attorney.

Joint Base Lewis-McChord told Military.com that Ray has been suspended from his job as I Corps chief of staff. 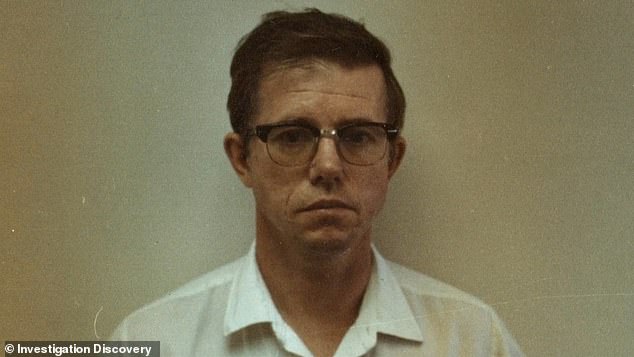 The photos and the video in bikini of Sol Pérez, the Argentine Yanet García, that heat up the networks | The State