Jerry Seinfeld was spotted in the Hamptons on Monday arriving at his $32million house in a vintage Porsche, a week after labeling a comedian who fled New York City for Florida a ‘putz’ and vowing never to abandon the Big Apple.

The comedian became the toast of the town after writing an opinion piece in The New York Times which defended the city and rebuffed what comedy club owner James Altrucher had previously claimed – that it was done for good.

Seinfeld wrote in the piece: ‘He says Everyone’s gone for good. How the hell do you know that? You moved to Miami. Yes, I also have a place out on Long Island. But I will never abandon New York City. Ever.’

Altrucher responded to Seinfeld’s piece saying it was unfair for him to be labeled as an absconder when the comedian was, himself, in the wealthy enclave of the Hamptons.

Altucher – who says he’s received death threats – hit out at Seinfeld and argued his initial post saying that New York was dead was based on facts.

He also said that a denial of the problems currently plaguing NYC, including the COVID-19 pandemic, crime and homelessness, wouldn’t help or save the city. 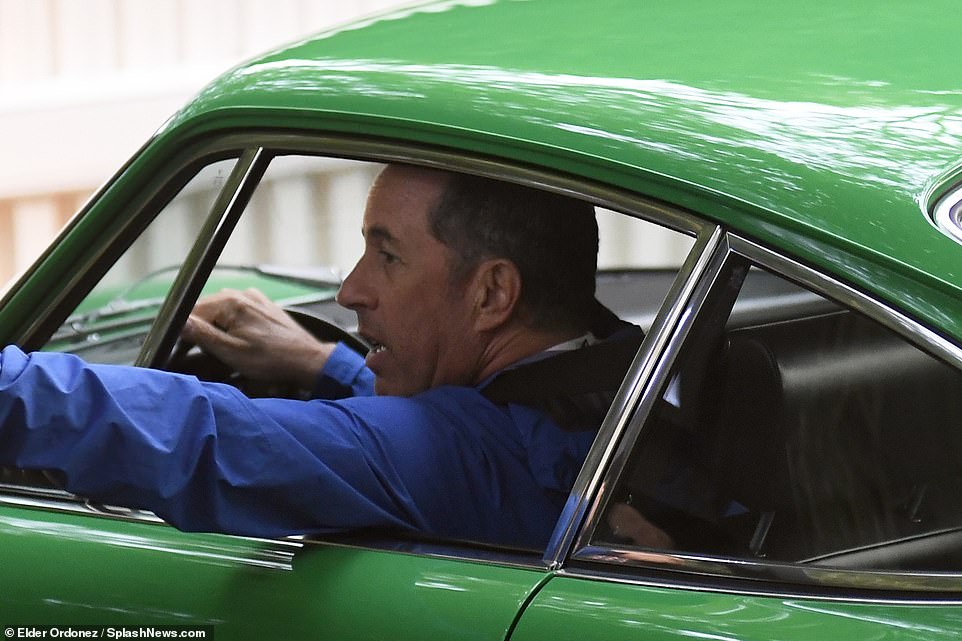 Jerry Seinfeld arriving home in East Hampton on Tuesday in his green vintage Porsche, a week after writing an op-ed slamming a comedy club owner for declaring New York dead and moving to Florida 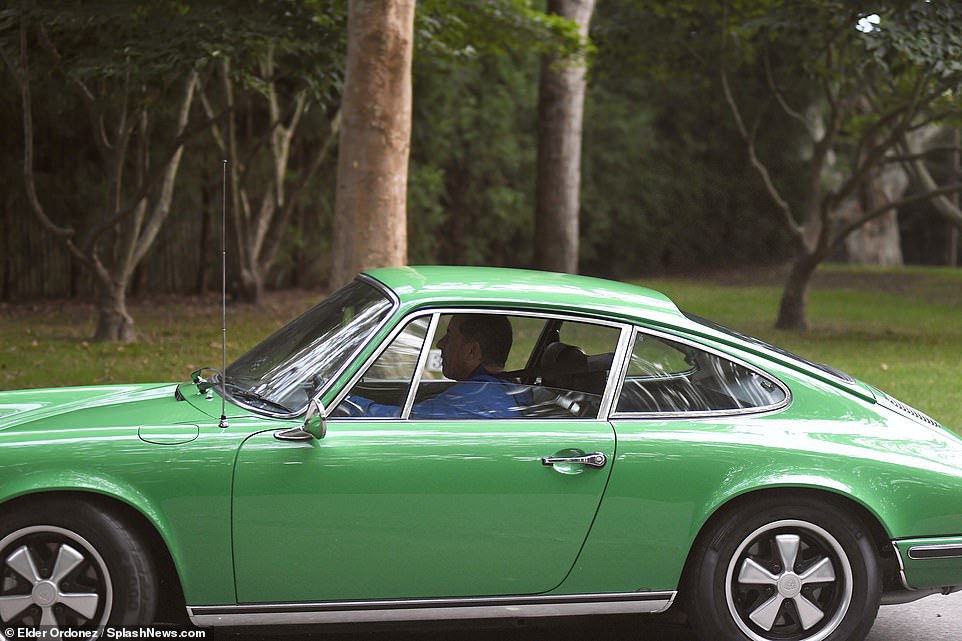 Seinfeld in the vintage car. He wrote in his op-ed that while he had a home in Long Island, he would ‘never abandon New York City’ 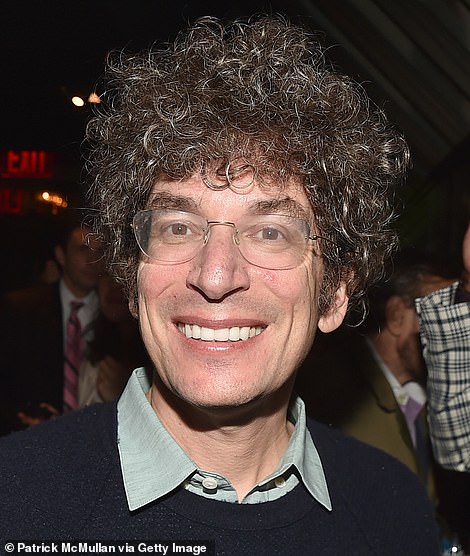 Jerry Seinfeld’s op-ed on Monday was a jab at comedy club owner James Altucher who wrote a blog post earlier this month declaring that that the city was dead and would never recover again.

In his initial post, Altucher had written about how he fled with his family to Miami following the week of looting and riots that plagued the NYC in June.

He criticized Seinfeld on Monday, saying that he wrote his op-ed from the ‘comfort and safety of his Hamptons mansion’ where he was likely to have dozens of ‘rare Italian sports cars in the garage’.

Seinfeld, who has an estimated net worth of $950million, lives in an apartment overlooking Central Park on the Upper West Side and also has a sprawling waterfront mansion in the Hamptons which he purchased for $32 million from Billy Joel back in 2000.

Many wealthy New Yorkers fled the city in favor of their Long Island homes as New York became the global epicenter of the COVID-19 outbreak five months ago.

It is not clear where Seinfeld has been spending the majority of his time during quarantine but his wife’s Instagram page has him pictured in Manhattan and the Hamptons since April.

‘I appreciate that Seinfeld is also concerned enough about the city to write a rebuttal. But there’s denial, and there’s reality. Denial won’t help anything. Failing to address problems won’t save Gotham.

‘We all get it. New York has ‘grit.’ I lived three blocks from Ground Zero on 9/11. I lived on Wall Street during the financial crisis and Great Recession. I was optimistic then. But let’s look at the facts – again.’ 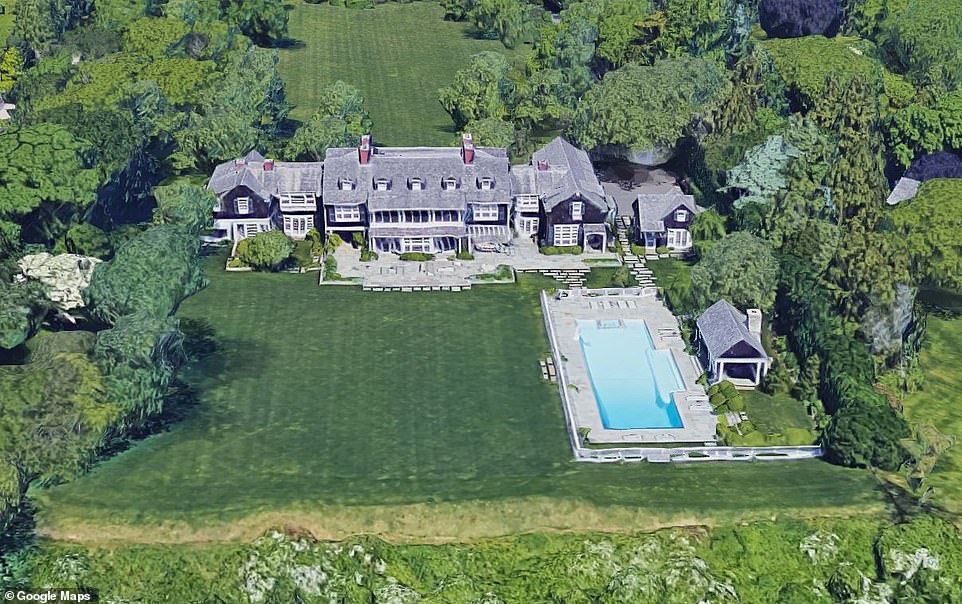 Seinfeld, who has an estimated net worth of $950million, lives in an apartment overlooking Central Park on the Upper West Side and also has a sprawling waterfront mansion in the Hamptons (above) which he purchased for $32 million from Billy Joel back in 2000 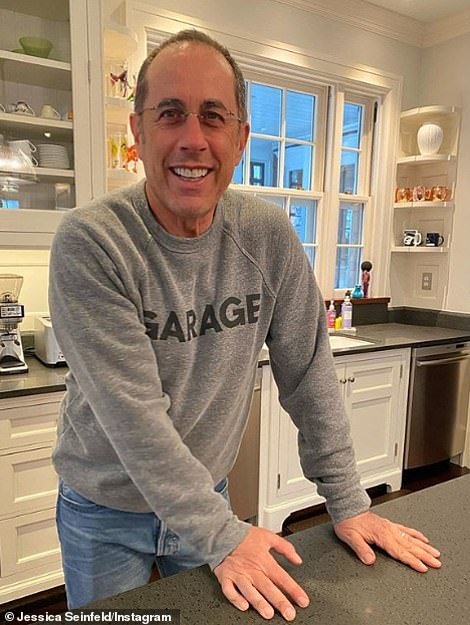 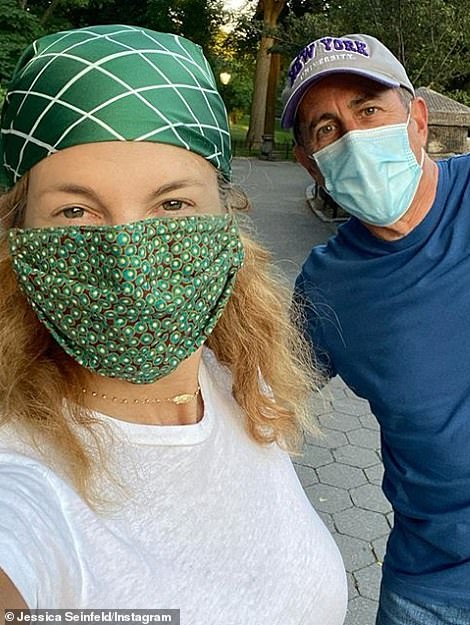 Jerry Seinfeld penned an op-ed on Monday saying New York City would bounce back despite the COVID-19 pandemic and escalating crime and homelessness. Seinfeld is pictured left at his Hamptons home in a photo dated April and right in Manhattan with his wife Jessica in a photo data June 29 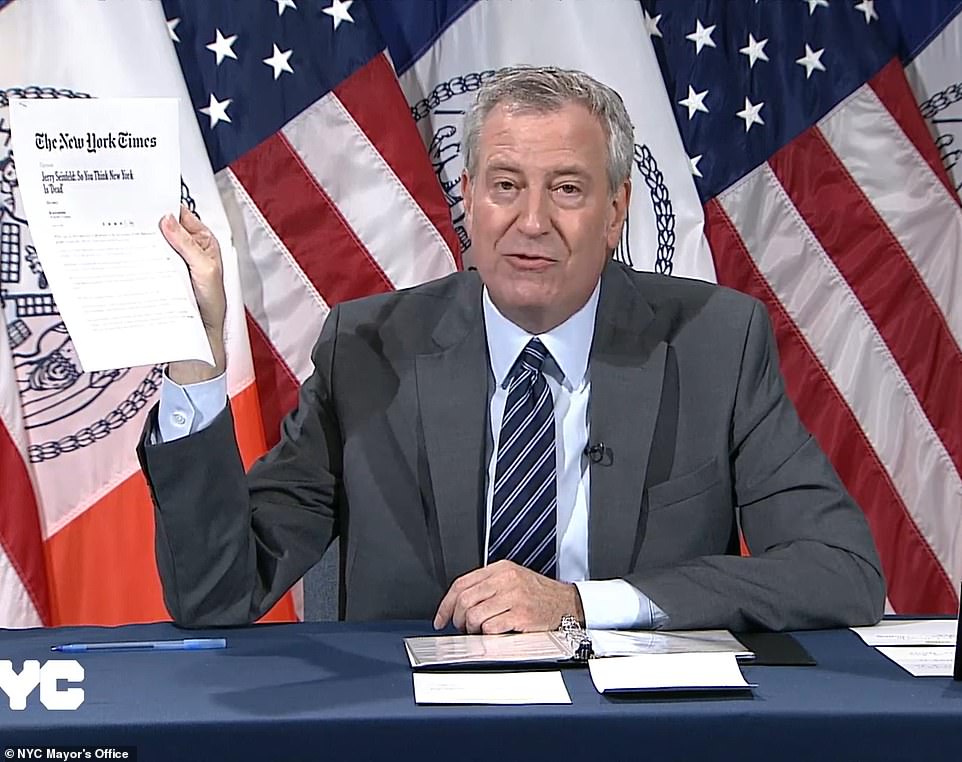 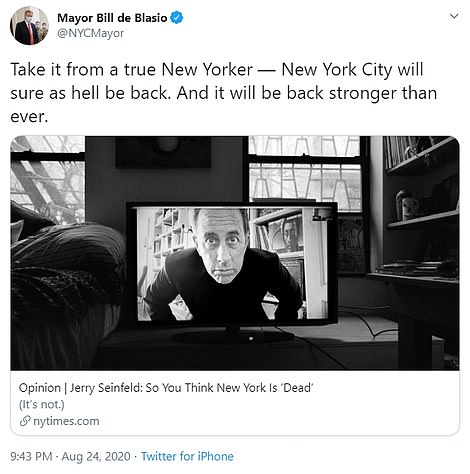 Altucher noted that apartment vacancies were at an all time high, deficits were at record highs and companies were packing up and moving on from NYC.

‘Nobody wants this. I don’t want it. Seinfeld doesn’t want it, though he doesn’t exactly suffer,’ he said.

‘It’s working-class people who will bear the brunt: the dry cleaners, the deli-sandwich virtuosos, the retail workers. Seinfeld and others imagine that ‘grit’ and ‘resilience’ are all it takes. Magical thinking is such a wonderful thing.’

He said some solutions to the problems included a huge bailout or incentives for businesses to remain in the city.

‘The city we love needs help. I don’t care that Seinfeld insults me in another paper. Hey, for all the grimness of the moment, at least I inspired a once-great ­comedian to finally write some new jokes,’ he said in a final jab at Seinfeld.

‘By the way, my local business, StandupNY, is doing 50 free shows in Central Park this week. You’re welcome to perform, Jerry, but I don’t think you’re in town.’

In his own op-ed on Monday, Seinfeld acknowledged that he does in fact have a place to retreat to outside the city but vowed to ‘never abandon New York City’.

Singling Altucher out for moving to Miami, Seinfeld wrote: ‘You found a place in Florida? Fine. We know the sharp focus and restless, resilient creative spirit that Florida is all about. You think Rome is going away too? London? Tokyo? The East Village?

‘They’re not. They change. They mutate. They re-form. Because greatness is rare. And the true greatness that is New York City is beyond rare. It’s unknown. Unknown anyplace outside of New York City. 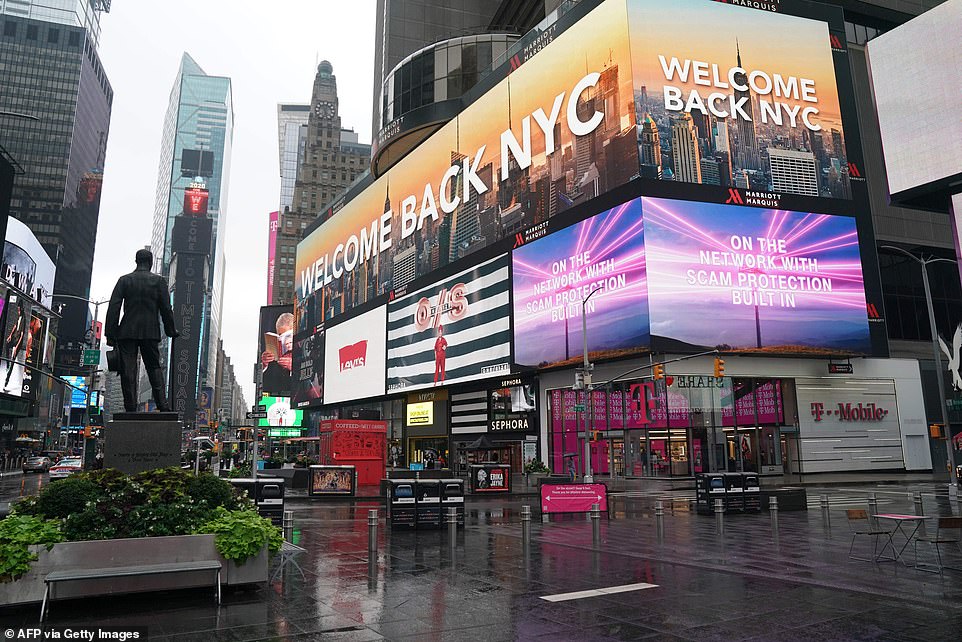 In response to Altucher’s claim that New York would never bounce back, Seinfeld insisted that it would because of ‘tough New Yorkers’ who stayed behind to rebuild it. Pictured above is an empty Times Square on August 16 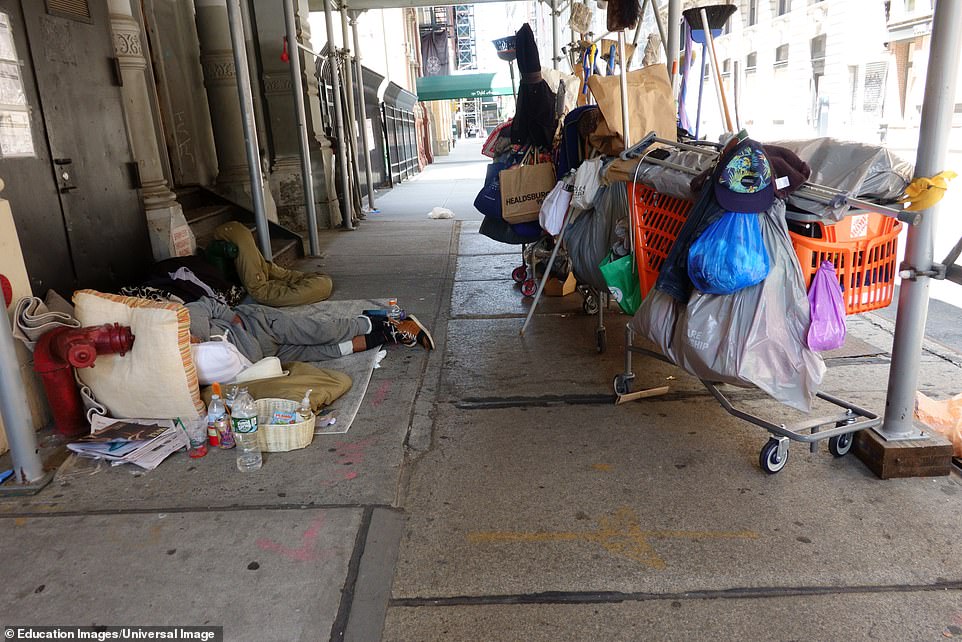 In addition to the pandemic, New York City has also grappled with a dark week of looting in June as some Black Lives Matter protests turned violent and the ongoing struggle against escalating crime and homelessness

‘This stupid virus will give up eventually. The same way you have. We’re going to keep going with New York City if that’s all right with you.

‘And it will sure as hell be back. Because of all the real, tough New Yorkers who, unlike you, loved it and understood it, stayed and rebuilt it.’

One of Altucher’s main arguments for NYC not bouncing back was that unlike in previous times of crisis – like 9/11 or the crime wave of the 70s – there is nothing currently bringing people back because people are working remotely.

Seinfeld, however, argues that working remotely isn’t sustainable because there is no ‘energy’ in doing that and ‘everyone hates it’.

‘Guess what: Everyone hates to do this. Everyone. Hates,’ Seinfeld wrote. ‘You know why? There’s no energy.

‘Energy, attitude and personality cannot be ‘remoted’ through even the best fiber optic lines. That’s the whole reason many of us moved to New York in the first place.

‘You ever wonder why Silicon Valley even exists? I have always wondered, why do these people all live and work in that location? They have all this insane technology; why don’t they all just spread out wherever they want to be and connect with their devices? Because it doesn’t work, that’s why.

‘He says he knows people who have left New York for Maine, Vermont, Tennessee, Indiana. I have been to all of these places many, many, many times over many decades. And with all due respect and affection, Are. You. Kidding. Me?! 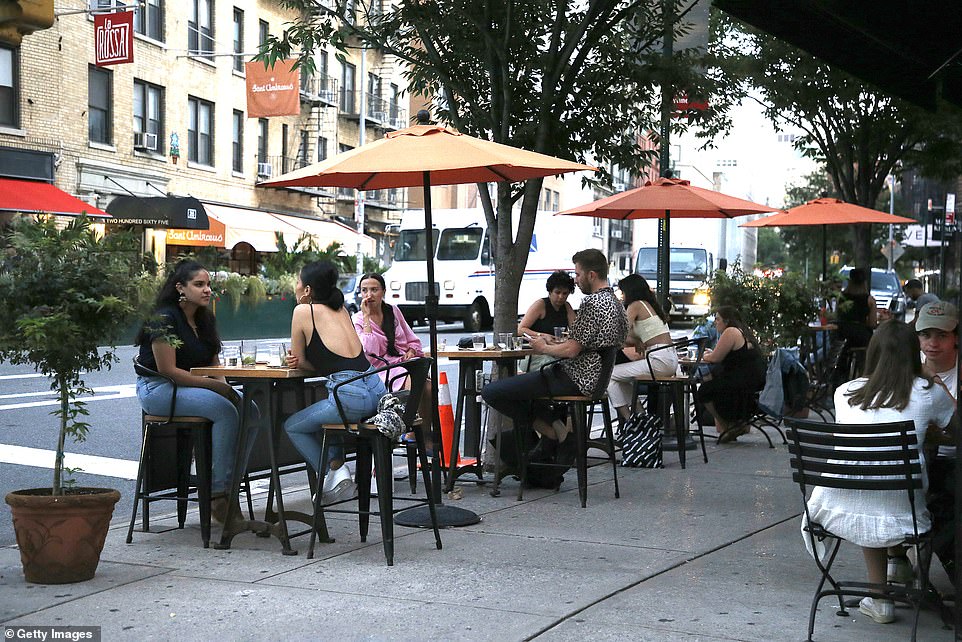 Numerous business leaders have suggested in recent weeks that the damage to NYC’s economy could last for years. Just last week, a coalition of New York City restaurants are threatening to sue Mayor Bill de Blasio after he admitted there was ‘no plan’ and refused to give a timeline for when indoor dining can return amid the COVID-19 pandemic

Seinfeld said the last thing anyone needed at the moment was the negativity Altucher showed given the ‘challenges’ everyone is facing right now.

‘The last thing we need in the thick of so many challenges is some putz on LinkedIn wailing and whimpering, ‘Everyone’s gone! I want 2019 back!’,’ he wrote.

‘Oh, shut up. Imagine being in a real war with this guy by your side. Listening to him go, ‘I used to play chess all day. I could meet people. I could start any type of business.’ Wipe your tears, wipe your butt and pull it together.’

Seinfeld’s op-ed was met with praise from Mayor Bill de Blasio during his Tuesday press briefing.

De Blasio said a true New Yorker ‘stands and fights’ to make the city better despite he ongoing pandemic and escalating crime and homelessness.

‘I want to take a moment to thank Jerry because this is what a true New Yorker does – stands and fights and works to make this place better no matter what’s thrown at us,’ de Blasio said.

‘That’s the vast majority of all of you out there because that’s what we’ve seen time and time again. Do undocumented immigrants who signed their voluntary departure to ICE have legal options? | The State 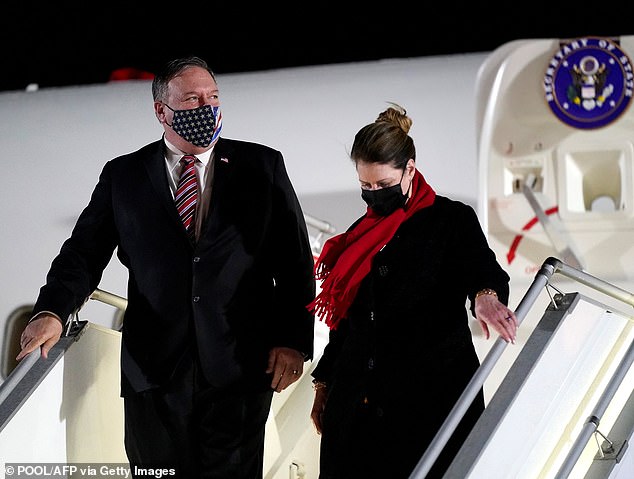