President Trump has spoken for the first time about the shooting of Jacob Blake, saying that he is looking into the incident.

Blake, a 29-year-old black father, was shot seven times by police Sunday as they responded to a domestic incident at a home in Kenosha, Wisconsin.

The shooting sparked several nights of rioting in the city, and has re-energized Black Lives Matter protesters across the country who say it is yet more evidence of racial injustice and police bias.

While Democratic Vice Presidential candidate Kamala Harris says the officer who shot Blake should face criminal charges, Trump stopped short of agreeing when questioned by the media in New Hampshire on Friday.

He told WMUR: ‘Well I’m looking into it very strongly. I’ll be getting reports, and I’ll certainly let you know pretty soon.’

‘It was not a good sight. I didn’t like the sight of it, certainly. I think most people would agree with that. But we’ll be getting reports in very soon, and we’ll report back then.’ 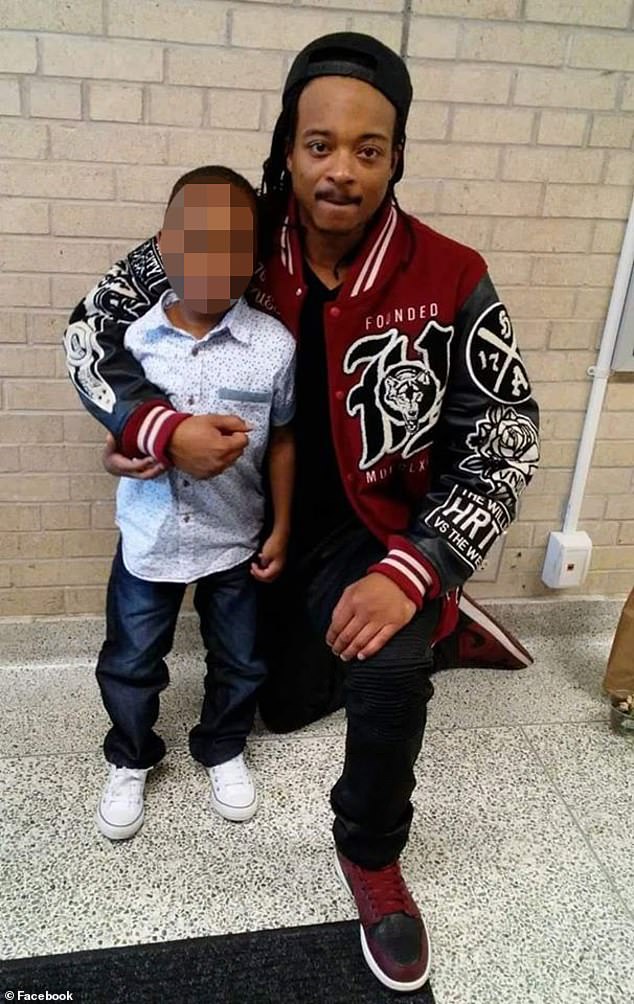 President Trump has spoken for the first time about the shooting of Jacob Blake (pictured), saying that he is looking into the incident. Blake was shot seven times by a police officer in Kenosha, Wisconsin on Sunday 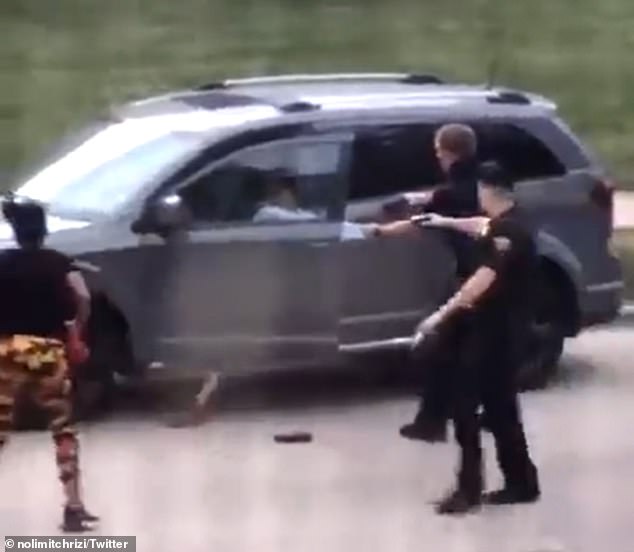 The shooting was captured by a bystander on cellphone video.  Pictured: Two officer seen at the side of Blake’s car just prior to the shooting

Trump did not mention the shooting in the speech he gave at the Republican National Convention on Thursday night.

He instead condemned riots that set off in the city in the aftermath of the incident.

‘When there is police misconduct, the justice system must hold wrongdoers fully and completely accountable, and it will,’ he stated, without referencing Blake.

‘In the strongest possible terms the Republican Party condemns the rioting, looting, arson and violence we have seen in Democrat-run cities all, like Kenosha, Minneapolis, Portland, Chicago and New York, many others, Democrat-run.’ 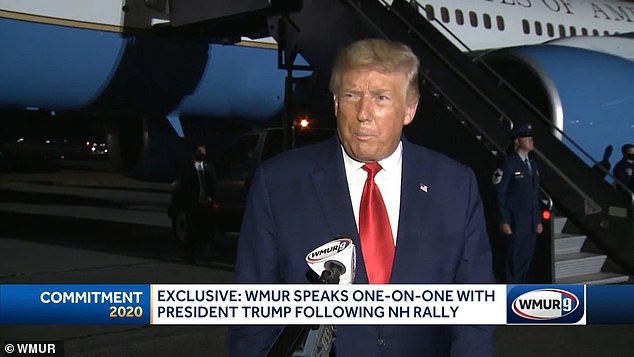 ‘It was not a good sight. I didn’t like the sight of it, certainly. I think most people would agree with that’: Trump gave his first remarks on the shooting of Jacob Blake during an interview with WMUR on Friday 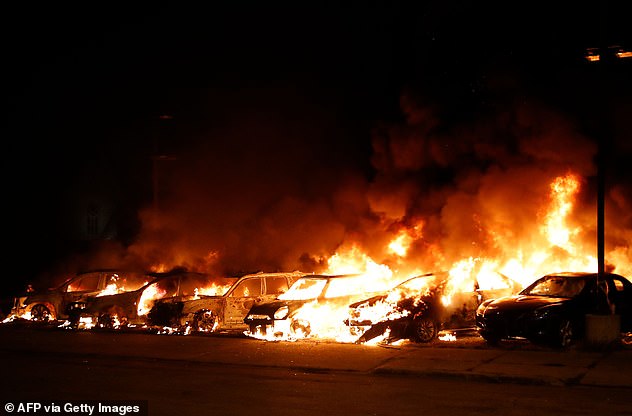 The shooting set off civil unrest in Kenosha, complete with arson and rioting. Trump condemned those acts in his RNC speech on Thursday night 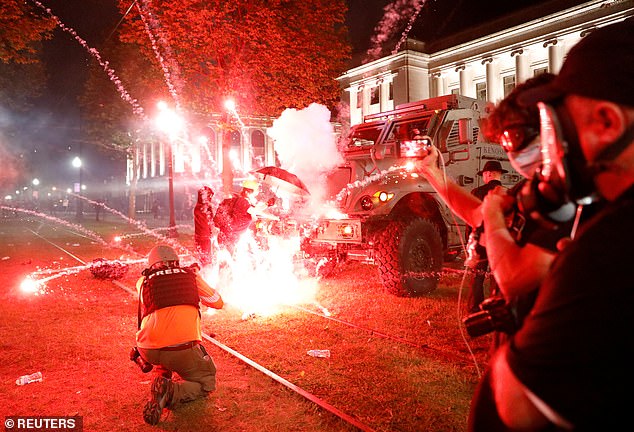 Chaotic scenes have unfolded in Kenosha after the shooting, with protests co-opted by rioters

Also on Friday, the Kenosha Professional Police Association union offered a detailed account on the officers’ perspective of the moments leading up to Blake’s shooting.

Their version of events differed from what was initially reported, with the cops claiming Blake had a knife and ‘forcefully fought’ with officers prior to the shooting.

Police on the scene say Blake put one of them in a headlock and shrugged off two attempts to stun him.

One of Blake’s attorneys has described the police union’s account as ‘overblown’.

Kenosha Police Officer Rusten Sheskey has been identified as the officer who fired the bullets that struck Blake in the back.

Officer Vincent Arenas reportedly tasered Blake beforehand. The third cop on the scene has been named as Brittany Meronek. Meronek is a rookie cop who only joined the force in January. 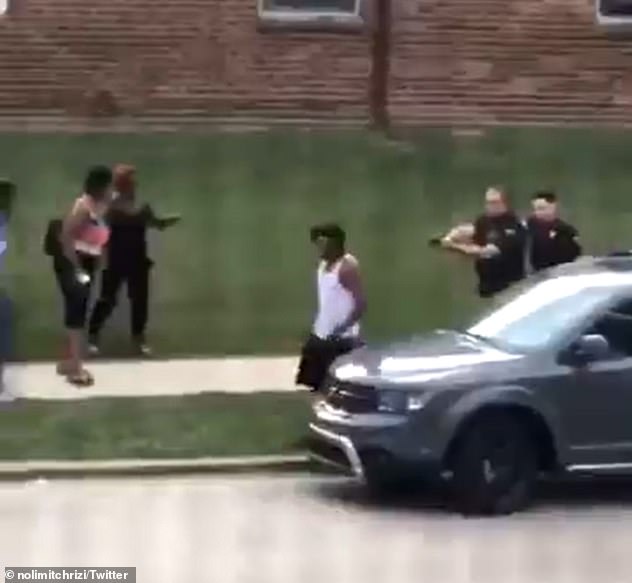 The bystander who recorded the shooting, 22-year-old Raysean White, said he saw Blake scuffling with three officers and heard them yell, ‘Drop the knife! Drop the knife!’ before gunfire erupted

According to the police union’s attorney, Brendan Matthews, the officers were dispatched to a house where Blake was because of a complaint that he was attempting to steal the caller’s keys and vehicle.

Matthews said officers were aware that Blake had an open warrant for felony sexual assault before they arrived.

Blake was armed with a knife, but officers did not initially see it, Matthews said.

‘The officers first saw him holding the knife while they were on the passenger side of the vehicle,’ he said.

The bystander who recorded the shooting, 22-year-old Raysean White, said he saw Blake scuffling with three officers and heard them yell, ‘Drop the knife! Drop the knife!’ before gunfire erupted.

He said he didn’t see a knife in Blake’s hands. State investigators have said only that officers saw a knife on the floor of the car. They have not said whether Blake threatened anyone with it.

Matthews said officers made multiple requests to Blake to drop the knife, but he was uncooperative. He said officers used a Taser on Blake, but it did not incapacitate him.

‘Blake forcefully fought with the officers, including putting one of the officers in a headlock,’ Matthews said. A second stun from a Taser also did not stop him, he said.

As Blake opened the driver’s door of the SUV, Sheskey pulled on Blake’s shirt and then opened fire. Blake’s three children were in the backseat.

‘Based on the inability to gain compliance and control after using verbal, physical and less-lethal means, the officers drew their firearms,’ Matthews said.

‘Mr. Blake continued to ignore the officers´ commands, even with the threat of lethal force now present.’ 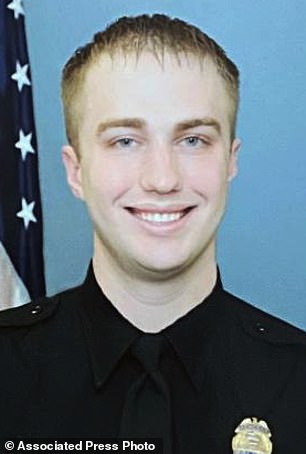 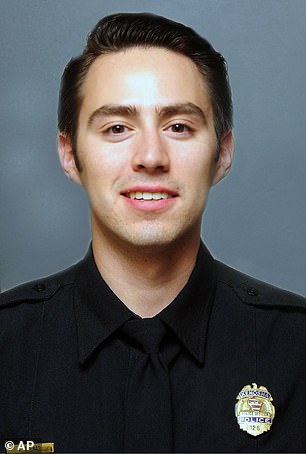