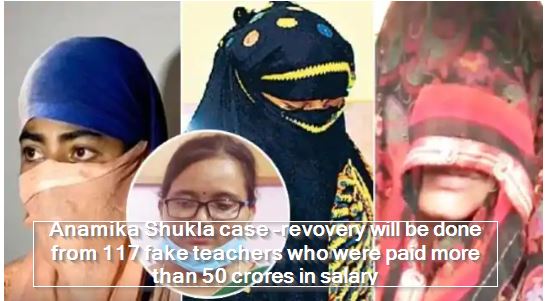 After the disclosure of the Anamika Shukla fake teacher case, the investigation of the certificates of teachers in UP has intensified. The government has tightened the screws on teachers working in the education department by preparing fake papers. The government has ordered BSA to recover from 117 Etah teachers. It can be more than 50 crores. After getting instructions from the government, the education department has started the process. The money has been asked to be deposited within a week of the issue of the notice. If money is not deposited within the stipulated time, RC will be deducted.

Basic Education Department Accountant Narendra Kumar Singh said that the government has received orders for recovery of Vetnadi from 117 fake teachers and teachers of the district. On completion of the assessment of recovery from teachers, notice will be issued to them. Notice will be issued twice to fake teachers. RC will be issued after the money is deposited. He told that this entire process has to be completed from the level of Basic Education Officer. Appraisal, the notice process will take two-three days.

The SIT investigation involved 122 fake teachers of the district. Out of that, notices have been given for recovery from five teachers. The government issued a list of his name on 20 May. After this, the Basic Education Department has become active as soon as the recovery order from 117 forgeries is received. Sanjay Singh, BSA Etah said that notices are being issued for reviewing the fake teachers. A week’s time has been given. RC will be issued if the money is not deposited within the stipulated time.

These were the five in the first list of the government.