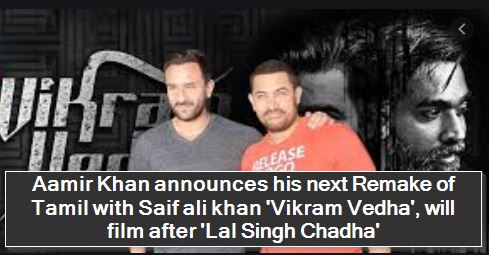 The corona virus has caused havoc all over the world. Bollywood industry is also stalled due to this. However, now the Maharashtra government has released guidelines to start shooting, after which actors are slowly starting to go on the sets. The news is coming that Aamir Khan has signed another film in the meantime. Aamir Khan’s film ‘Lal Singh Chadha’ was scheduled to release this Christmas. However, there is no information on when the cinema halls will reopen. The release of all films has been deferred since March. In such a situation, this film of Aamir is going to be released in the year 2021. Aamir has also extended his dates with Vikram Vedha.

According to trade sources, Aamir Khan is going to work on a Hindi remake with Vikram Vedha. It will also star Saif Ali Khan. And now Aamir will start shooting for this film only when Lal Singh Chadha is released.

Let us tell you that Aamir Khan and Saif Ali Khan will be seen with each other after the film ‘Dil Chahta Hai’. After 20 years, the onscreen pair of both will be seen again. This film of Aamir and Saif is a remake of the 2017 Tamil film. In the film, Saif will be seen playing the role of a police officer. At the same time, Aamir will play the role of a gangster.

Amrita Rao on when she was linked to Shahid Kapoor: ‘He was in a relationship when I was his co-star, we weren’t even friends’ ‘Twilight’ fame actor Gregory Tyre found dead with girlfriend at home, cause of death not revealed

Paresh Rawal: The time of only one actor ruling the film industry for decades, is gone now