‘No borders! No nations! Abolish deportations!’ Violent anti-ICE protests continue in Portland after Biden inauguration as Seattle police chief vows to get tough on left-wing vandals

Officers with the Federal Protective Service, a branch within the Department of Homeland Security, declared an unlawful assembly at about 10pm and ordered protesters to disperse.

‘If you trespass on federal property with a weapon … you will be arrested,’ a recording warned the crowd before officers began deploying tear gas and flash bangs. ‘If you trespass on federal property with a weapon … you will be arrested,’ a recording warned the crowd before officers began deploying tear gas It’s unclear how many protesters, if any, were arrested over Saturday night’s skirmishes.

Dozens of protesters were seen resisting officers’ orders to leave the area. They held up umbrellas to shield from clouds of tear gas filling the air. Protesters spray painted the side of the ICE facility, which was boarded up for security On Wednesday night, protesters pelted the building with rocks and eggs, eliciting another show of force by federal officers.

‘We wanted to symbolize that both parties are the oppressor,’ a 25-year-old protester, who asked not to be named, told CNN. ‘We’ve all experienced firsthand that police violence is police violence regardless [of which political party holds power]. … It doesn’t make a difference to the person being beaten.’

Biden has yet to respond to the incidents or offer a plan to curb the violence.

Asked about the matter at a press briefing on Friday, Biden’s Press Secretary Jen Psaki said: ‘I haven’t spoken with him specifically about those events, but it’s something our national security team, the homeland security adviser, is closely monitoring, of course.’ Meanwhile Seattle’s interim police Chief Adrian Diaz has vowed to crack down on protests there.

Anyone who destroys property during protests in Seattle will now be arrested and prosecuted under a strict new policy coordinated with City Attorney Pete Holmes, Diaz announced Saturday.

Details about the new policy were not immediately available, the Seattle Times reported.

A spokesperson for Holmes’ office indicated that they were unaware of any changes, telling the newspaper: ‘We only learned about it after the fact.’

Diaz criticized the protests that have roiled the city for months, saying that the demonstrators are more focused on vandalism than social justice. 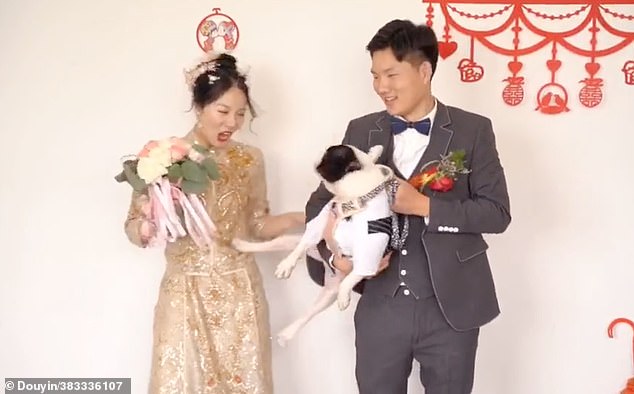 Dog kicks owner: Pet ‘kicks away’ bride after being held by the groom while posing for wedding photo Out of jealousy, a man was stabbed to death on the street of the Bronx, in broad daylight | The State