Tom Hanks will host a TV special following the inauguration of Joe Biden, while Demi Lovato, Jennifer Lopez and more artists are set to perform.

President-elect Joe Biden and Vice President-elect Kamala Harris will soon take office — and the pair are set to ring in their new administration with some of the most respected names in entertainment. Academy Award winner Tom Hanks has been announced as the host of a 90-minute special, Celebrating America, which will air after the duo are sworn into America’s top office on January 20.

Jennifer Lopez, Demi Lovato, Justin Timberlake, Jon Bon Jovi, and Ant Clemons are also set to perform during the program which will “showcase the American people’s resilience, heroism, and unified commitment to coming together as a nation to heal and rebuild.” On January 14, it was revealed that JLo will take the stage as part of the broadcast, amid news of her new single, “In The Morning”.

Frontline workers, healthcare workers, teachers, and other heroic Americans will be honored during the broadcast, per the official synopsis, while even more A-list performers are slated to be announced. Former Disney star Demi Lovato revealed she was “speechless” when asked to perform. “I’m SO honored to announce that I will be joining @joebiden & @kamalaharris for their special event, Celebrating America,” she captioned an Instagram post on January 13. “I was left speechless when I was asked to perform.” Meanwhile, Justin Timberlake gave fans a behind the scenes look at the writing process for his new song “Better Days”, which he will perform on the TV special.

“This past year brought a lot of frustration, grief, anger — and there were times when it was easy to feel powerless,” Justin captioned a January 13 Instagram clip. “This song was our way of doing what little we could to encourage everyone to stay hopeful… and keep working towards a better, more equal future. I’m very honored to announce we will be performing this song on January 20th for the Presidential Inauguration. We have a long way to go to fix, undo, and rebuild this country… but I hope now, despite the past four years, we are on our way.” Celebrating America will air on January 20 at 8:30pm on multiple platforms, including ABC, CBS, CNN, NBC, and MSNBC. 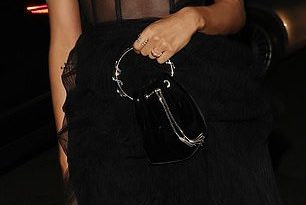