Actor Deepika Padukone received a warm birthday wish from actor Hrithik Roshan. However, while thanking him for the same, she teased her fans with an upcoming ‘big celebration’.

Wishing Deepika on her birthday yesterday, Hrithik had written in a tweet, “Happy Birthday my dear @deepikapadukone! Keep shining and dazzling the world like only you do. Best wishes, always.” Replying to him, Deepika wrote, “Thank You so much HR! Now for another big celebration coming up in a couple of days…! @iHrithik.”

When a fan wondered if they are going to announce a movie together, another replied, “HRITHIK KA BIRTHDAY ON 10TH HAHAHAJAJAHAHAH.” Others were still hopeful of an exciting announcement. “Listen to us and do a movie together now,” read a comment.

Previously, both Deepika and her husband Ranveer Singh have confessed their love for Hrithik Roshan. After watching him in War, she took to Twitter to compliment him and wrote, “@iHrithik in WAR is like Death by Chocolate from Corner House! Just Saying.” She also added a drooling emoji.

In another interview, she revealed how Ranveer and her would hit pause while watching War, to marvel at him saying “Kya naachta hai, kya dikhta hai”. Also at a party in 2019, Deepika was seen staring at Hrithik as he fed her some chocolate cake at a party. Talking about him, Deepika had told Mumbai Mirror in an interview, “It’s amazing how my husband and I can sit together and appreciate a guy. That video of him (Hrithik) feeding me cake was a wakeup call for filmmakers to cast us together.”

Deepika’s next release will by 83 with Ranveer. While he plays former cricket star Kapil Dev, she plays his wife Romi in the Kabir Khan film. It was supposed to release last year but was delayed due to the coronavirus pandemic. The film has still not been given a new release date.

Hrithik’s last release was War with Tiger Shroff and he has not announced his next project since. There are reports that he is working on Krrish 4 with his father Rakesh Roshan. 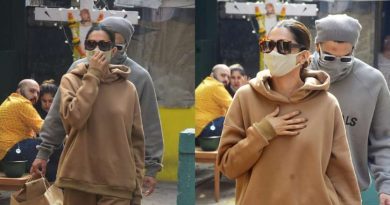