Paulina Porizkova has revealed that years of marriage to her late husband Ric Ocasek left her feeling like an ‘invisible, a dried-up old husk’ while opening up racism in the fashion industry.

The Sports Illustrated Swimsuit star, 55, paid tribute to fellow model Karen Alexander, 54, on Instagram Tuesday, sharing a photo of them posing together during a shoot for Avon in 2015.

‘The last time we worked together was for this Avon ad. Karen had just given birth to a beautiful little girl; she was nursing and leaking and feeling self-conscious about her weight, when in fact she was at the height of her beauty,’ she wrote.

Old friends: Paulina Porizkova, 55, paid tribute to fellow model Karen Alexander, 54, on Instagram Tuesday, sharing a photo of them in an Avon ad together in 2015 Memories: Paulina recalled how Karen had just given birth and was at the ‘height of her beauty,’ while she felt like an ‘invisible, a dried-up old husk’ in her marriage to Ric Ocasek

Paulina admitted she was jealous of Karen, even though she had a far more difficult time in the industry as a black woman.

‘I was already in the part of my marriage where I was felt invisible, a dried-up old husk, and here was Karen, same age, and positively glowing. Content and radiant, someone to envy,’ Paulina explained.

‘And here I was, envious of a woman who, although the supermodel of her time with covers too numerous to name, had, because of her skin color, in no ways the same opportunities as myself.’

Paulina recalled being on set with Karen for the commercial when she learned she was making far more money than her friend, who was doing the same amount of work. Candid: In her post, Paulina admitted she was jealous of Karen, even though she had a far more difficult time in the industry as a black woman

‘As we sat in our makeup chairs, I discovered I was the only model to be booked for the commercial. Which was a significantly larger amount of money. This sort of racism in the business was something Karen was well acquainted with, but it dawned on me for the first time,’ she admitted.

‘Talk about white privilege — I never even thought to think of it!’

Paulina said she later learned on Instagram that Karen was diagnosed with dermatomyositis, a rare autoimmune condition that causes skin changes and muscle weakness.

‘Yeah, I had never heard of it either. But it has made her incredibly sick,’ she explained. Despite the personal hell she’s going through, she is still managing to be compassionate and loving, and empathetic to people around her, people who have it way easier than herself. Painful: It’s been a difficult year for Paulina who has been mourning the death of her estranged husband Ric. The Cars frontman passed away in September 2019 Heartache: Paulina and Ric were separated at the time of his death, and The Cars frontman had cut her out of his will, claiming she ‘abandoned’ him. They’re pictured with their sons in 2016

‘If I were a religious person, I’d call her the perfect example of the goodness religion tried to stand for. Not a saint, mind you, she’s way more fun [than] that!’

It’s been a difficult year for Paulina who has been mourning the death of her estranged husband Ric Ocasek while struggling with depression and anxiety.

The Cars frontman passed away in their shared Manhattan townhouse at the age of 75 on September 15, 2019. She sold their family home and moved out in October, revealing that she was moving into a rental.

Paulina and Ric had two children together, sons Jonathan, 27, and Oliver, 22. They were married for three decades before they quietly separated in 2017, but they had not yet finalized their divorce when he passed away last year.

Before his death, Ric had cut his estranged wife out of his will, claiming that he was ‘abandoned’ by her. Au naturel: Paulina celebrated New Year’s Day by sharing a makeup-free selfie, saying she is ‘truly naked on this first day of 2021’ Flipping the bird! On New Year’s Eve, Paulina shared a cheeky of snapshot of herself giving the middle finger, writing: ‘F U 2020’

The couple was separated and going through a divorce when he died, but because they were not legally divorced, Paulina, as his widow, may be entitled under New York law to an ‘elective share’ of his estate.

Ric specifically addressed the rule in his will, stating: ‘Even if I should die before our divorce is final…Paulina is not entitled to any elective share…because she has abandoned me.’

However, unless it can be proven in court that she did abandon him, she will likely be entitled to a one-third share of the musician’s assets, which are listed as $5 million in ‘copyrights,’ $100,000 in ‘tangible personal property,’ and $15,000 in cash.

Paulina has been incredibly candid about both her anger and her grief in her social media posts since her husband’s passing.

On New Year’s Day, she took to Instagram to share a makeup-free selfie of herself, writing: ‘Here I am — truly naked on this first day of 2021. ‘No makeup, no filters, no anything in my face but the nearly fifty-six years of life. One year older — and at least twenty wiser.’ She got it from her mama!  Paulina and her mom Anna, 74, flashed their impressive abs after working up a sweat during a virtual Nofar Method pilates class on Monday Inspiration: The model has proudly shown off her enviable abs in other photos over the years

Paulina went on to open up about what pressure can do to a person but refrained from going into detail about her own struggles.

‘Did you know that the saying “what doesn’t kill you makes you stronger” is in fact not true? Scientifically proven. Most of us get destroyed under extreme pressure,’ she explained.

‘It rearranges us to fear. Like carbon, the origins of matter for diamonds, the possibility to be hewn a diamond from a disaster is possible — but unlikely — given all the other materials that exist in the same soil,’ she continued.

‘It is, however, held up as an example for all of us — because it’s a good quick hopeful fix. I believe there is no such thing as a quick easy fix.

‘Good things don’t always come easy. Love hurts. The best most of us can do is not to become a hard unbreakable diamond, but to remain a soft, vulnerable human with the added empathy of understanding the pain of others.’ Secret to success: Over the summer, the model gave her fans a behind-the-scenes look at the pilates workout after leaving them in awe of her enviable abs the day before

Paulina followed up the selfie with a picture of her and her 74-year-old mom flashing their enviable abs after working up a sweat during a virtual Nofar Method pilates class.

‘Mom @porizkovaanna and I checking our abs in the mirror after a @nofarmethod Zoom class. She is about to turn seventy-five, folks,’ Paulina captioned the image, which appears to have been taken at her home in upstate New York.

This isn’t the first time she has touted the online classes. Over the summer, she gave her fans a behind-the-scenes look at the pilates workout after leaving them in awe of her enviable abs the day before.

In the fast-motion video, she can be seen doing a series of oblique V-ups, leg lifts, and hip raises on the floor while wearing a black sports bra and leggings.

Workouts that are touted by celebrities are often out of the average person’s price range, but one virtual Nofar Method class costs just $16. Memories: In a recent post, Paulina recalled how her mom fell in love, joined the Peace Corps, and got married on Italy’s Amalfi Coast, all while in her 70s, calling her an ‘inspiration’ Proud daughter: Paulina shared photos of her mother’s 2019 wedding, including one of her helping her mom get ready for the nuptials

Paulina’s latest post was about more than her workout, though. In the caption, she also opened up about her mother’s inspiring life, which has only gotten more exciting over the years.

‘Since she turned seventy, she found the man of her life, spent two years in the Peace Corps in Uganda with him, and got married in a glorious wedding in Italy. She is also one of the first volunteers for the Pfizer vaccine,’ she proudly wrote.

‘She is undoubtedly an inspiration — even though we have had a very complicated relationship. What inspires me most about her, however, was her bravery in saying “I’m sorry.” I still need to work on that one.’

Anna fled Czechoslovakia with Paulina’s father to escape the Soviet-led Warsaw Pact invasion in 1968 and settled in Sweden. She went several years without seeing her daughter before Communist authorities permitted Paulina to leave and join her parents.

When Anna remarried on the Amalfi Coast in July 2019, her daughter was right by her side to help her get ready for her big day. 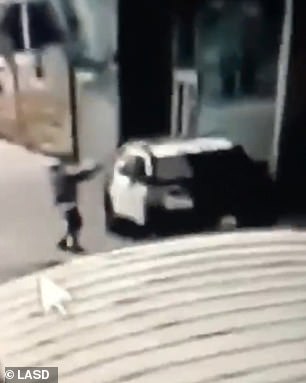