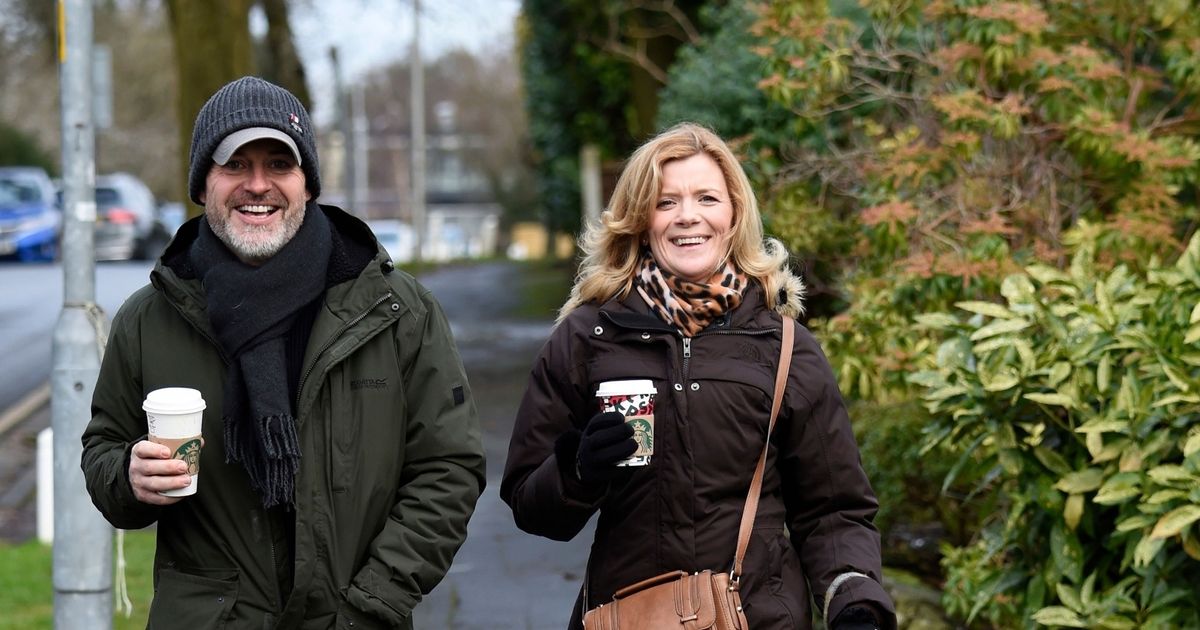 Jane Danson and husband Robert Beck beamed from ear-to-ear as they took their pooch on a walk in Cheshire.

The Coronation Street stars – who tied the knot in 2005 – were seen enjoying each other’s company as they each clutched a coffee during their romantic stroll.

The actress, 42, was seen holding the leash as their sweet Labrador led the way.

Robert, 52, wrapped up warm for the occasion, opting for a green coat and a pair of jeans.

The actor paired his casual look with a black hat and scarf, as well as a pair of brown boots.

The mum-of-two wore a pair of gloves for an extra layer of warmth as she accessorised with a brown cross-body bag.

The pair seemed to be in good spirits as they beamed during the outing near their home.

Meanwhile Robert was a later addition to the soap, joining the cast in 2008 until his departure the following year.

The pair originally met at the first ever British Soap Awards ceremony back in 1999.

Rob previously revealed: “We met at the first ever Soap Awards back in 1999. I was in Emmerdale at the time. Jane came over and introduced herself.”

And the Corrie star said approaching her then-future husband was out of character for her.

“I’m not the world’s most confident person but I’d had a crush on Rob since I was 15, so I thought, I have to speak to him, it’s fate,” she said.

And the actress says life at home is more perfect than she could have hoped.

“Rob’s absolutely my best friend in the world. We’ve only had about two rows in twenty years. I’m not saying we don’t get on each other’s nerves sometimes but we’re a strong team and we’ve always allowed each other to be individuals,” she said.

They then went on to tie the knot in 2005, and have since welcomed two boys.

The pair are proud parents to 14-year-old Harry and 11-year-old Sam.