Iran said it executed a young wrestler on Saturday despite international and social media calls for his release, including a plea from Donald Trump.

Iran claims Navid Afkari was responsible for the murder of a public sector worker during anti-government protests in 2018.

The 27-year-old was executed in the morning at a prison in the southern city of Shiraz, provincial prosecutor general Kazem Mousavi was quoted as saying on state television’s website.

Afkari had been found guilty of ‘voluntary homicide’ for stabbing to death Hossein Torkman, a water department worker, on August 2, 2018, according to the judiciary.

US President Trump had said last week: ‘Hearing that Iran is looking to execute a great and popular wrestling star, 27-year-old Navid Afkarai, whose sole act was an anti-government demonstration on the streets.

‘To the leaders of Iran, I would greatly appreciate if you would spare this young man’s life, and not execute him. Thank you!’ he tweeted, tagging a Fox News story on the wrestler and the UFC mixed martial arts organization and its president Dana White. 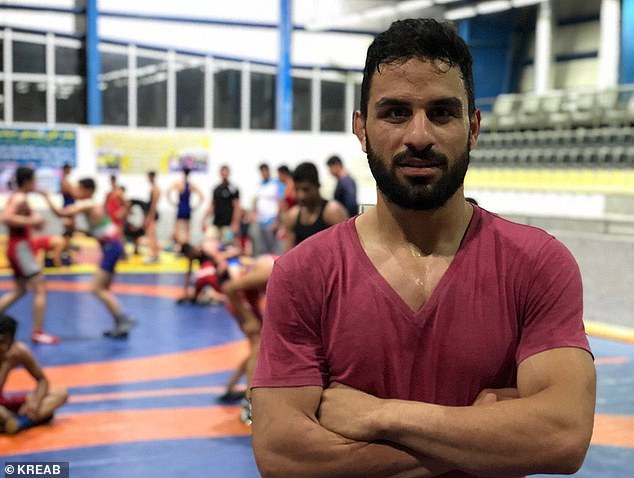 Iranian state TV has aired an apparent confession by wrestler Navid Afkari (pictured), who today was executed after having been charged with a 2018 murder

On Saturday, Iran responded to Trump’s tweet with a nearly 11-minute state TV package on Afkari.

It included the weeping parents of the slain water company employee, Hassan Torkaman.

The package also showed footage of Afkari on the back of a motorbike, claiming he had stabbed Torkaman in the back without explaining why he allegedly carried out the assault.

The state TV segment showed blurred police documents and described the killing as a ‘personal dispute,’ without elaborating.

It also said Afkari’s cellphone had been in the area and showed surveillance footage of him walking down a street, talking on his phone.

Those supporting Afkari have accused police of torturing a confession out of him after finding the surveillance footage.

Shiraz and several other urban centres across the Islamic republic had been the scene that day of anti-government protests and demonstrations over economic and social hardship.

Reports published abroad say Afkari was condemned on the basis of confessions aired on television after being extracted under torture, prompting online campaigns of support for his release. 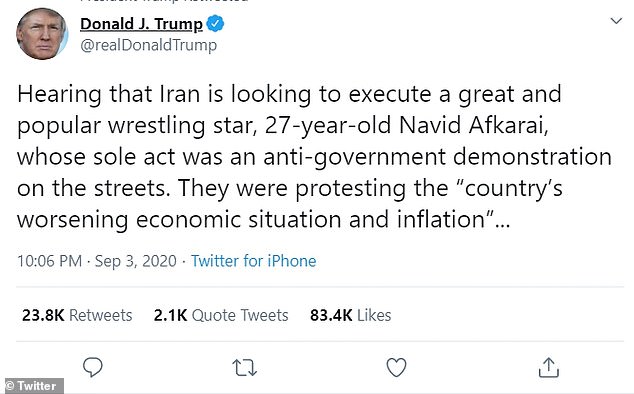 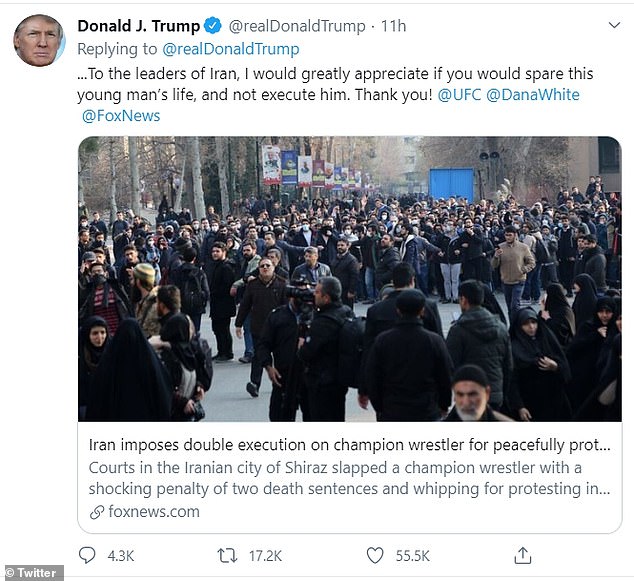 According to Amnesty, Afkari’s last contact with his family was a short phone call on September 6.

His two brothers Vahid and Habib are still detained at the same prison as him, the group said in a statement. 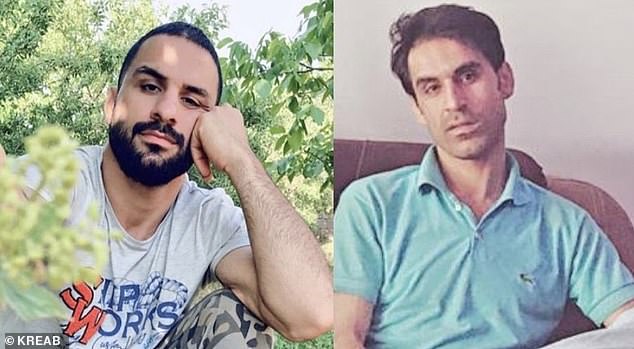 Navid (left) and his brother Vahid (right) were sentenced by Iran’s supreme court along with a third brother, Habib 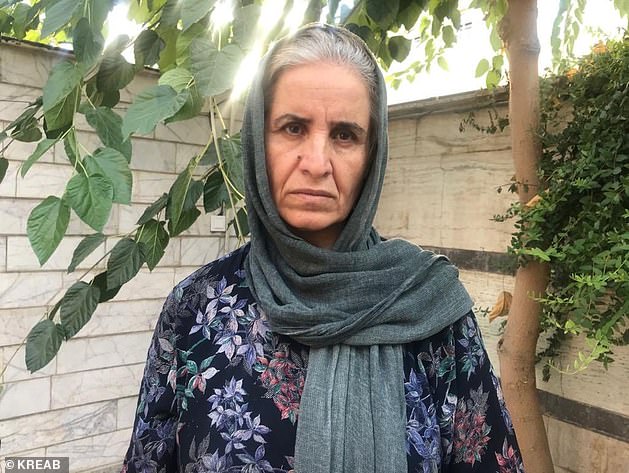 The sentence had been carried out at ‘the insistence of the victim’s family’, said Mousavi, the prosecutor general for Fars province.

Afkari’s lawyer, Hassan Younessi, said on Twitter that a number of people in Shiraz were to meet with the slain worker’s family on Sunday to ask for their forgiveness.

He also said that based on criminal law in Iran ‘the convict has a right to meet his family before the execution.’

‘Were you in such a hurry to carry out the sentence that you deprived Navid of his last visit?’

US President Donald Trump had pleaded for Afkari’s life earlier this month, saying his ‘sole act was an anti-government demonstration on the streets’. 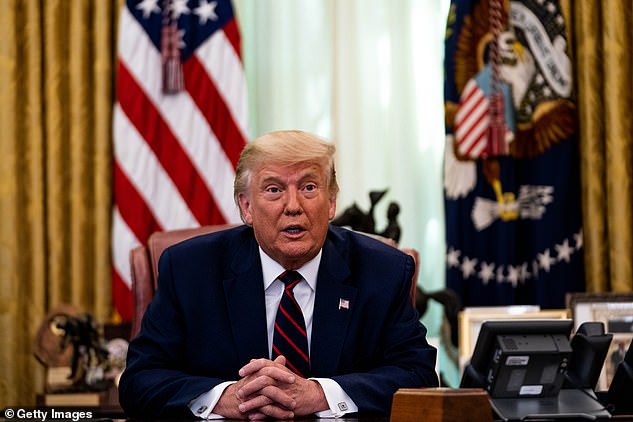 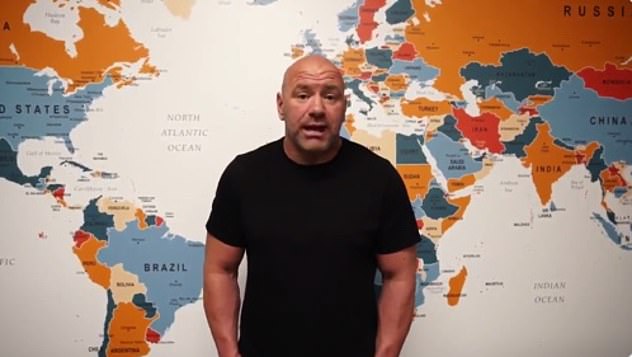 Dana White, the president of the mixed martial arts competition UFC, has also called on Iran to drop the death sentence against the wrestler

Trump has maintained an aggressive approach of ‘maximum pressure’ toward longtime US foe Iran since becoming president, enacting crippling economic sanctions after withdrawing from a landmark nuclear deal with Tehran and world powers in 2018.

A global union representing 85,000 athletes had also called on Iran to spare the wrestler’s life.

In a statement issued Tuesday on its website, World Players United called on the International Olympic Committee to use its leverage to help Afkari.

The Persian hashtagh #Navid-Afkari was also being widely used on Twitter to protest the execution. 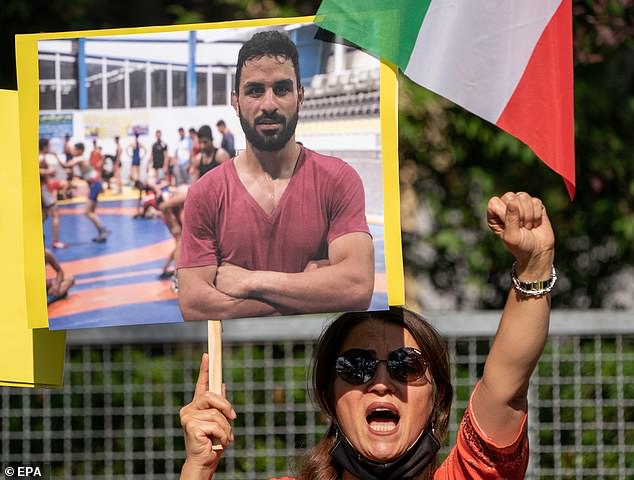 BERLIN: A supporter of the National Council of Resistance Iran (NWRI) and the Iranian Exile Society in Berlin holds a placard with the picture of Iranian wrestler Navid Afkari outside the Iranian embassy in Berlin, while protesting against his execution 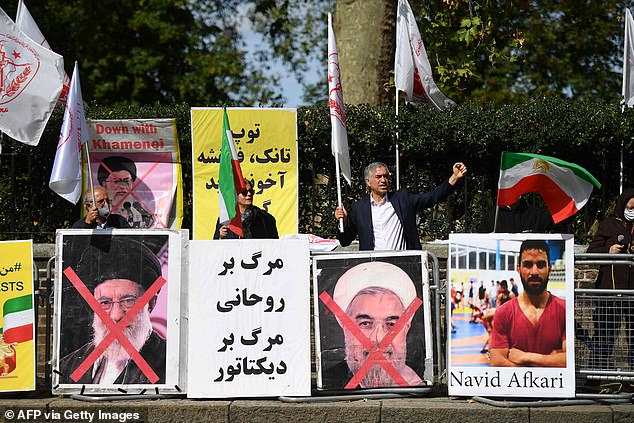 LONDON: Protesters wave the Lion and Sun flag of the National Council of Resistance of Iran and the white flag of the People’s Mujahedin of Iran, two Iranian opposition groups, outside the Iranian embassy in London, protesting the execution of Navid Afkari

Iranian rights activist Emaddein Baghi tweeted that Afkari’s execution was a ‘great sin’ as the judiciary should have tried to persuade the murdered man’s family to forgive the wrestler.

Lawyer Babak Paknia also criticised the judiciary for its ‘haste’ to carry out the sentence.

‘Even if a murder had really ocurred, is it not the judicial system’s procedure to do all that is possible to receive forgiveness?’ he tweeted.

Paknia represents three men sentenced to death over links to similar protests in November, but the trio’s execution was halted over a request to the supreme court to review the verdict.