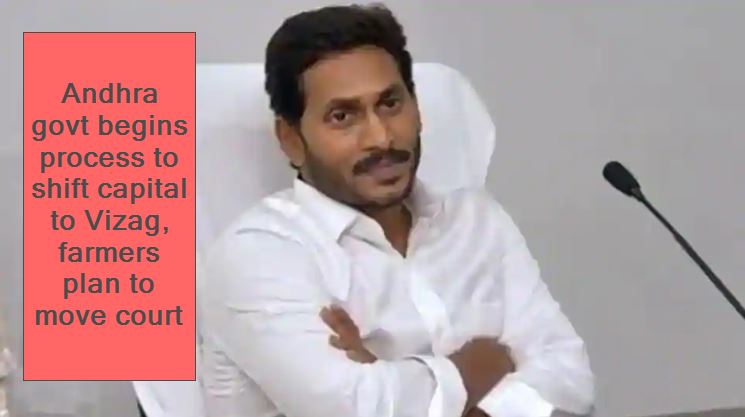 Sushant Singh Rajput’s cook Neeraj: His sister Meetu asked us to bring his body down

On Saturday, the state government appointed a high-level committee to look into the development of security infrastructure in Visakhapatnam.

With Andhra Pradesh governor Biswabhusan Harichandan approving the two bills related to the formation of three capital cities for the state, the YS Jagan Mohan Reddy government has begun the exercise to shift the administrative capital from Amaravati to Visakhapatnam.

On Saturday, the state government appointed a high-level committee to look into the development of security infrastructure in Visakhapatnam. The committee is headed by Visakhapatnam Commissioner of Police R K Meena and would comprise of eight senior officials. An officer on special duty (security planning) would be its convenor.

The committee will study the infrastructure required for strengthening the security and policing in Visakhapatnam in the wake of it being developed into the executive capital. It would also look into the requirement of additional police forces in the capital city.

Director General of Police Gautam Sawang directed that the committee submit its report within two weeks.

Soon after the issuance of gazette notifications on the two bills — the Andhra Pradesh Decentralisation and Inclusive Development of All Regions Bill, 2020, and the AP Capital Region Development Authority (Repeal) Bill, 2020 – declaring them as Acts on Friday evening, minister for urban development and municipal administration Botsa Satyanarayana announced that chief minister Y S Jagan Mohan Reddy would soon lay the foundation for the executive capital at Visakhapatnam.

An official in the chief minister’s office familiar with the development said the chief minister is likely to lay the foundation stone for the executive capital at Visakhapatnam on August 15, soon after the Independence Day celebrations, which would also be held in the port city.

Jagan reportedly deputed his CMO staff to make arrangements for the foundation stone laying ceremony. “The shifting of the government offices would commence shortly in a phased manner and if everything goes as per plan, the state secretariat and other administrative offices would be shifted to Visakhapatnam by October 25, coinciding with Dusshera festival,” the official said.

The farmers of Amaravati who had given away nearly 34,000 acres of land to the state government for development of the state capital during the Chandrababu Naidu regime, have vowed to fight against the shifting of the administrative capital to Visakhapatnam.

Daughter in law of BJP state president of Andhra Pradesh Kanna Laxminarayan,dies in suspicious condition after a party

Hundreds of farmers from Tulluru, Mandadam, Venkatayapalem and Velagapaudi staged protests in their respective villages, maintaining social distance as per Covid-19 norms, to express their dissent against the Governor’s approval for the three capitals.

“We are completely shattered. The state government is least bothered about the sacrifices made by thousands of farmers hoping that there would be a capital at Amaravati. We are pinning our hopes on the judiciary now,” Amaravati Parirakshana Samithi Joint Action Committee (JAC) leader A Siva Reddy said.

The farmers are now planning to move a petition in the high court on Tuesday seeking a stay on the implementation of the three capitals Act. A petition filed by former Telugu Desam Party MLA from Tadikonda Sravan Kumar earlier this week is pending in the high court, which posted it to August 6 for hearing.

“We are questioning on what basis the state government had taken the decision to form three capitals. The so-called expert committee by G N Rao was formed only to suggest measures for the all-round development of the state and not for trifurcation of the capital city. We are ready to face a long-drawn legal battle in this regard,” Anil Karumanchi, a farmer from Venkatayapalem said.

Sushant Singh Rajput’s cook Neeraj: His sister Meetu asked us to bring his body down

Shameful – After the death of a corona patient, the corporators took the body in JCB

Daughter in law of BJP state president of Andhra Pradesh Kanna Laxminarayan,dies in suspicious condition after a party