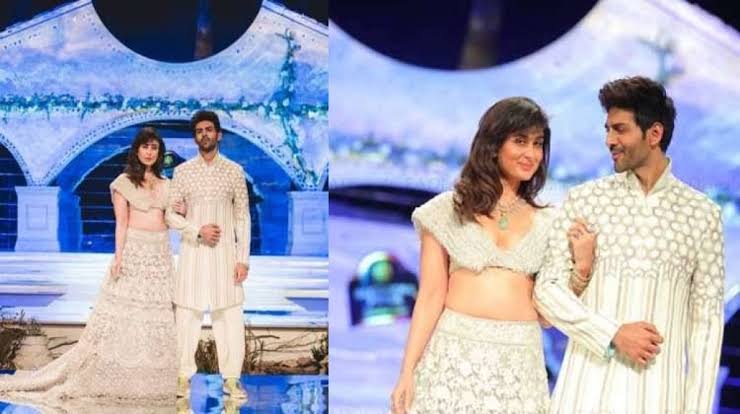 HYDERABAD : Kareena Kapoor and Kartik Aaryan walked the ramp together for fashion designer Manish Malhotra’s summer wedding 2020 collection at a recent fashion show. Kartik, who is a self-confessed Kareena Kapoor fan, shared pictures from the fashion show on his Instagram profile on Sunday morning. Kartik took a leaf from Kareena’s 2007 film Jab We Met and he captioned the post: “Jab Veer met Geet.” For the uninitiated, Geet was Kareena’s character’s name in Imtiaz Ali’s Jab We Met and Veer is the name of Kartik’s character in Love Aaj Kal. In the pictures, Kareena can be seen dressed in an embroidered pristine white lehenga. She can also be seen sporting side bangs in the picture, while Kartik can be seen dressed in a matching kurta-pajama set.

Meanwhile, Manish Malhotra shared pictures from the fashion show and he wrote: “Special moments with the very special Kareena Kapoor and Kartik Aaryan, the wonderful models, the entire team that worked on the show and the 800 people who watched the show and gave it overwhelming love and applause.”

co-starring Akshay Kumar, Diljit Dosanjh and Kiara Advani. The actress will next be seen in Karan Johar’s period drama Takht and Aamir Khan’s Laal Singh Chaddha, which is a remake of the 1994 film Forrest Gump.

Vikrant Massey on nepotism: From playing hero ka dost to lead roles now, I can’t complain at all