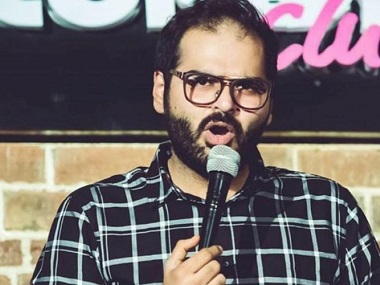 Mumbai’s Bal Gandharva Rangmandir saw a fundraising event Stand Up For India on Thursday evening “to donate to various organisations working to help the nationwide protests against the CAA-NRC – both by raising awareness as well as providing legal aid to democratic and peaceful protesters.”

Kunal Kamra made a surprise entry and stunned the audience with a performance. As writer and comedian Varun Grover introduced Kamra’s act, he said, “Since he can’t fly anywhere else, he’s here tonight.”

As Kamra walked in, members of the audience rose up to give the comedian a standing ovation. Through his set, Kamra didn’t crack a joke on the recent controversy with Arnab Goswami but didn’t hold back from making jokes at the government or the Prime Minister.

Kunal Kamra has been banned by airlines like IndiGo, Air India, Go Air and Spice Jet after he approached Arnab Goswami for a conversation on a flight to Lucknow. The comedian shot a video and posted online which gathered reactions from people all over social media.

Comedian Rohan Joshi said, “It was Kaneez Surka and Amshula, a friend of ours who is also a lawyer, who took the lead on this. I don’t think there’s ever been a show with a lineup of this sort.”

Comedian Kaneez Surka, who helped bring the various artistes together for the show, “All the artists are doing this pro bono. We were donating individually anyway and we’re so active (about this) on social media, so we thought, why don’t we use our art to raise money for aid?” Kaneez added, “This is not a normal show. We’re not doing this for publicity. We’re doing it positively use whatever influence we have, and also to show our solidarity as citizens.”

The event was organized to ‘help the nationwide protests against the CAA-NRC’ and saw various stand-up comics come together and perform. And, Kunal Kamra, introduced by Varun Grover, was a surprise act for the evening