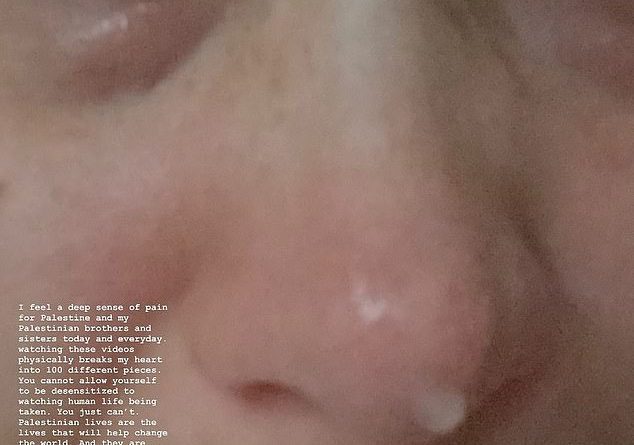 Palestinian-Dutch supermodel Bella Hadid has been very vocal about her opinions on the ongoing geopolitical conflict between Israel and Palestine, even to a fault.

And on Saturday morning she shared a sobbing selfie saying she felt a ‘deep sense of pain,’ for the people of Palestine as she continued to take sides — despite many calling her previous social media posts ‘mis-informed.’

Just days ago the 24-year-old daughter of multi-millionaire Mohamed Hadid (a Palestinian real estate developer) was slammed for sharing a graphic that said Israel was not a country, for which she was accused of anti-semitism.

Sobbing selfie: Bella Hadid, 24, posts sobbing selfie and talks about ‘deep sense of pain’ she feels for Palestine as she continues to takes sides on the geopolitical conflict

Bella’s posted a closeup shot of her face with tears streaming down her cheeks as she continued to speak on the situation.

‘I feel a deep sense of pain for Palestine and for my Palestinian brothers and sisters today and everyday. watching these videos physically breaks my heart into 100 different pieces.

‘You cannot allow yourself to be desensitized to watching human life being taken. You just can’t. Palestinian lives are the lives that will help change the world. And they are being taken from us by the second. #FreePalestine’

Days ago Bella found herself in hot water after she shared a graphic with anti-semitic rhetoric, the multi-slide post reading that Israel was not a country and was a land settled by colonizers.

Her post about the nation state — which was established in 1948 —was said to have inflamed the very fraught situation and contributed to rising anti-semitism on a global scale. Numbers wise Bella boasts 41.7M Instagram followers — three times the amount of Jews in the world. Palestinian roots: The daughter of Palestinian real estate developed Mohamed and former Real Housewife Yolanda Hadid was slammed for after sharing a now-deleted anti-semitic post that said Israel wasn’t a country days ago Dangerous rhetoric: It was said that her post inflamed the very fraught geopolitical situation and contributed to rising anti-semitism on a global scale ‘Israel colonization’: The supermodel shared a 10 slide graphic which said Israel was responsible for ‘ethnic cleansing’ and was not a country but a land settled by colonizers Retracting her statements: The graphic caused her receive a lot of backlash online prompting her to delete it

Other social media accounts including Refinery29, Diet Prada and various celebrities including Tracee Ellis Ross also re-posted it on Instagram.

‘There is NO place for this!!! Especially in 2021!!!! it has always been #freepalestine. ALWAYS. I have a lot to say about this but for now, please read and educate yourself. This is not about religion. This is not about spewing hate on one or the other. This is about Israeli colonization, ethnic cleansing, military occupation and apartheid over the Palestinian people that has been going on for YEARS,’ she wrote in the now-deleted post.

Sister Gigi Hadid also was accused of anti-semitism on social media, to which she responded on Saturday by posting a screen grab of her comments section.

One follower wrote on the post ‘Another anti-Semitic celebrity,’ and someone else commented: ‘We gonna stay in Israel, no matter how much u try to kill us its our land and our country and we don’t give up on her.’ Public stance: ‘I stand with my Palestinian brothers and sisters, I will protect and support you as best as I can,’ she said in her post Firing back: Sister Gigi Hadid also was accused of anti-semitism on social media, to which she responded on Saturday by posting a screen grab of her comments section Heating up: One follower wrote on the post ‘Another anti-Semitic celebrity,’ and someone else commented: ‘We gonna stay in Israel, no matter how much u try to kill us its our land and our country and we don’t give up on her’ Model daughters: The famed sisters are Palestinian and Dutch and both have become two of the world’s most in demand supermodels; pictured February 2020

Gigi fired back: ‘I condemn anti-Semitism. “I” am not trying to kill you, nor would I ever want that. I do not wish any more deaths upon Israelis, just as I feel about Palestinians. What I do want is equal rights for Palestinians.

She continued: ‘There are also Jewish Palestinians and Christian Palestinians, as there was, coexisting, with my father’s Muslim Palestinian family when he was born in Palestine in 1948. I wish you peace.’

Her baby daddy Zayn — who is Pakistani and British — also gave his two cents as he shared a graphic that read: ‘What’s happening in Sheik Jarrah,’ while demanding ‘human rights’ for all Palestinians.

The Sheikh Jarrah neighborhood of Jerusalem has become a battle ground, after an Israeli court was set to rule over whether or not they would uphold the expulsion of Palestinian families from the area on Monday May 10. Sheikh Jarrah: Gigi Hadid’s baby daddy Zayn Malik also spoke out on the conflict has he shared a graphic about the situation in Sheik Jarrah Statistics: And Bella continued to try and illuminate her followers with more information as she shared a post about ‘fake news’ with death tolls relative to both Palestine and Israel over the last 12 years

The case was delayed by up to 30 days instead to allow attorney general Avichai Mandelblit to review it.

The Israeli government in turn has argued that the case was a ‘private real-estate dispute between the Palestinian families and a secretive Jewish settler group,’ per the New York Times, but tensions continue to flare with violence on both sides including air strikes

Since Monday, the Palestinians say at least 139 people, including 39 children, have been killed in Gaza and Israel has reported 10 dead per Reuters. And the conflict has also spilled over into US soil with protests for both sides occurring nationally.

And on May 14, Bella continued to try and illuminate her followers with more information as she shared a post about ‘fake news’ with death tolls relative to both Palestine and Israel over the last 12 years. Large family: The Hadid siblings have all spoken out on the conflict via social media including sisters Alana and Marielle as they continue to express pride over their Palestinian heritage Ben Stiller reuniting with Owen Wilson, Carla Gugino and the cast of Night at the Museum