Johnny Depp was today refused permission to bring an appeal against a damning High Court ruling that he assaulted his ex-wife Amber Heard and left her in ‘fear for her life’.

Lawyers for The Pirates of the Caribbean star had asked two Court of Appeal judges to grant permission for him to challenge the ruling, with the aim of having its findings overturned and a second trial ordered.

They claimed the judge in Depp’s initial libel trial had not ‘factually’ considered all the allegations of violence against him and that they had ‘fresh evidence’ Ms Heard had ‘lied’ about giving her entire £5.5million ($7m) divorce settlement to charity.

They said that the charity claim influenced how her testimony was viewed, but the Court of Appeal ruled that it did not have an impact on the judge and that he would have reached the same conclusion on Ms Heard being the victim of domestic violence.

Following an explosive three-week trial last July at London’s High Court, Mr Justice Nicol dismissed the Hollywood actor’s libel claim against the publisher of The Sun, finding that a column it published in April 2018 that the actor was a ‘wife beater’ was ‘substantially true.’

The judge ruled that Mr Depp, 57, assaulted Ms Heard, 34, on a dozen occasions and put her in ‘fear of her life’ three times often while on drink and drugs binges, which he said turned the actor into a ‘monster’, in one of the most high-profile libel clashes of this century. Hollywood star Johnny Depp, pictured, went to the Court of Appeal over his recent High Court defeat over allegations that he had assaulted his ex-wife Amber Heard The High Court in London was told that Amber Heard, pictured last July, was in fear of her life. Mr Justice Nichol found a story that claimed Depp had assaulted his ex-wife was ‘substantially true’ The High Court libel case heard a string of claims about the nature of Depp’s relationship with his ex-wife Amber Heard, left, and was nicknamed the trial of the century

Dismissing Depp’s permission to appeal, Lord Justice Underhill and Lord Justice Dingemans insisted that the initial libel hearing was ‘full and fair’ and that the judge had not made any errors in law and was not influenced by Ms Heard’s charity claim.

They concluded: ‘We would accordingly dismiss both Mr Depp’s application for permission to adduce further evidence and his application for permission to appeal. As we have said, it is not easy to persuade this Court to overturn the findings of a trial judge on purely factual questions. We do not believe that there is a real prospect of it being prepared to do so in this case.’

During last week’s hearing before the Court of Appeal, Depp’s QC Andrew Caldecott accused Ms Heard of giving away ‘a fraction’ of the huge sum of her divorce settlement as part of a ‘calculated and manipulative lie’ to make herself look better.

Mr Caldecott argued that if ‘the truth about the charity claim emerged at the trial, it would have materially affected Mr Justice Nicol’s consideration of Ms Heard’s evidence as a whole’.

But in turning down Depp’s application, the Court of Appeal declared that issues relating to how much of the money she had donated were not relevant because ‘his [Mr Justice Nicol’s] focus was squarely on the evidence relating to the alleged assaults themselves.’

The judges added: ‘We do not accept that there is any ground for believing that the Judge may have been influenced by any such general perception as Mr Caldecott relies on.’

Referring to the grounds laid out by Depp’s lawyers that Mr Justice Nicol had not fully considered all the allegations of violence against him, the Court of Appeal judges ruled that they had ‘no prospect of success.’

A spokesman for Ms Herd said: ‘We are pleased – but by no means surprised – by the Court’s denial of Mr. Depp’s application for appeal. The evidence presented in the UK case was overwhelming and undeniable. To reiterate, the original verdict was that Mr. Depp committed domestic violence against Amber on no fewer than 12 occasions and she was left in fear of her life.

‘The verdict and lengthy, well-reasoned Judgment, including the Confidential Judgment, have been affirmed. Mr. Depp’s claim of new and important evidence was nothing more than a press strategy and has been soundly rejected by the Court.’

The Sun said: ‘The Sun had every confidence that this leave to appeal application would not be granted and are pleased with today’s decision.

‘The case had a full, fair and proper hearing, and today’s decision vindicates the courageous evidence that Amber Heard gave to the court about domestic abuse, despite repeated attempts to undermine and silence her by the perpetrator. The Sun will continue to stand up and campaign for victims of domestic abuse.’ 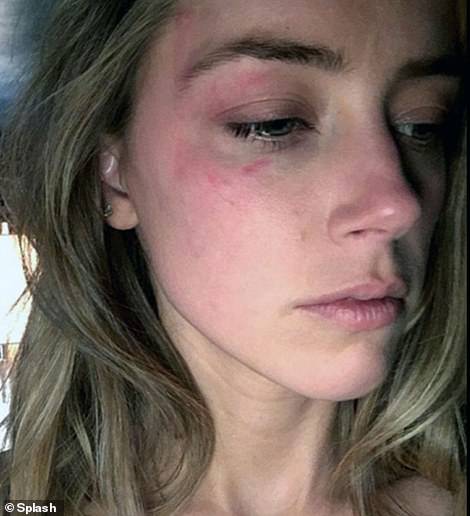 At a hearing last week, Mr Depp’s lawyers asked the court to consider fresh evidence relating to what they said was Ms Heard’s claim that she gave her £5.5m ($7m) divorce settlement to charity.

His barrister Andrew Caldecott QC told the court that claim was a ‘calculated and manipulative lie’.

After the couple divorced in 2016, Ms Heard said she would split the money between the Children’s Hospital Los Angeles and the American Civil Liberties Union (ACLU).

But, Mr Caldecott said, the hospital wrote to Mr Depp’s business adviser in 2019 to say Ms Heard had not made ‘any payments’.

Last week, the Court of Appeal hearing heard how Mr Depp lashed out in a 2016 text to his nurse after Ms Heard said she was donating the settlement to charity.

Mr Caldecott said the claims had given Ms Heard ‘a considerable boost to her credibility as a person’, and had ‘tipped the scales against Mr Depp from the very beginning’.

But Adam Wolanski QC, representing The Sun’s publisher News Group Newspapers (NGN), said the new evidence Mr Depp wanted to rely on ‘would not have had any impact’ on the result of the trial.

He also rejected Mr Depp’s contention that Ms Heard had lied about donating her divorce settlement to charity, saying: ‘The information does not demonstrate that Ms Heard lied.’ 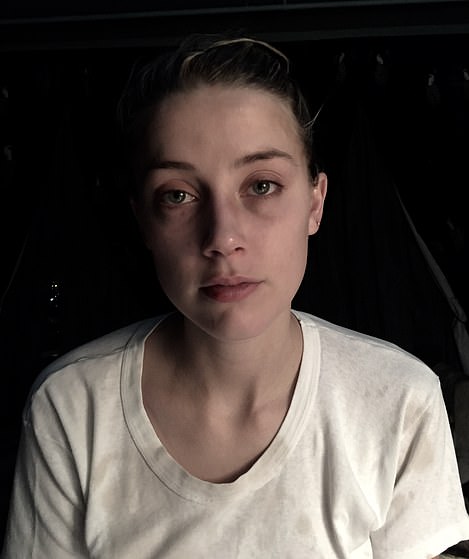 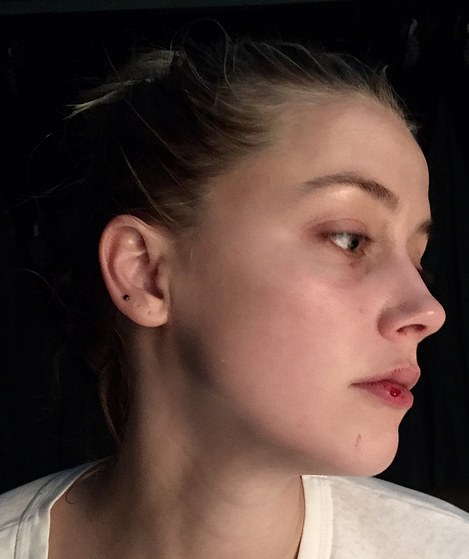 Heard’s team showed the court photos of a separate incident showing bruising to her face after Depp allegedly headbutted her. The trial heard evidence about 14 altercations from their time together. The court believed Heard that he did hit her

Mr Depp sued NGN in June 2018 over the column by The Sun’s executive editor Dan Wootton, which referred to ‘overwhelming evidence’ he attacked Ms Heard.

In his judgment, Mr Justice Nicol concluded 12 of the 14 alleged incidents of domestic violence relied on by NGN in its defence of the actor’s claim did occur.

The judge also found Mr Depp put Ms Heard in ‘fear for her life’ on three occasions, including one the actress described as a ‘three-day hostage situation’ in Australia in March 2015.

Days after the ruling in November, Mr Depp announced he had been asked by Warner Brothers to resign from his role in the Harry Potter spin-off franchise Fantastic Beasts – a role that prompted Mr Wootton to ask how JK Rowling could be ‘genuinely happy’ that Mr Depp was cast in the film.

Mr Depp is embroiled in a separate libel battle in the US, having sued Ms Heard personally over a 2018 Washington Post opinion piece in which she claimed to be a victim of domestic abuse but did not mention the actor by name.

In a statement, Mr Depp’s solicitor Joelle Rich from the law firm Schillings said: ‘The evidence presented at last week’s hearing further demonstrates that there are clear and objective reasons to seriously question the decision reached in the UK court.

‘Mr Depp looks forward to presenting the complete, irrefutable evidence of the truth in the US libel case against Ms Heard, where she will have to provide full disclosure.’ In November Depp accepted an award from Camerimage, a film festival in Poland, for Minamata, in which he plays the war photographer W Eugene Smith. He sent a photograph of himself standing behind bars in what appeared to be his private island in the Bahamas. After slicing off the top of his finger, Depp went to the bathroom at the mansion in Melbourne they were renting – and wrote I love you in his blood on the mirror. He also daubed other graffiti on the mirror during his drug-fuelled rage 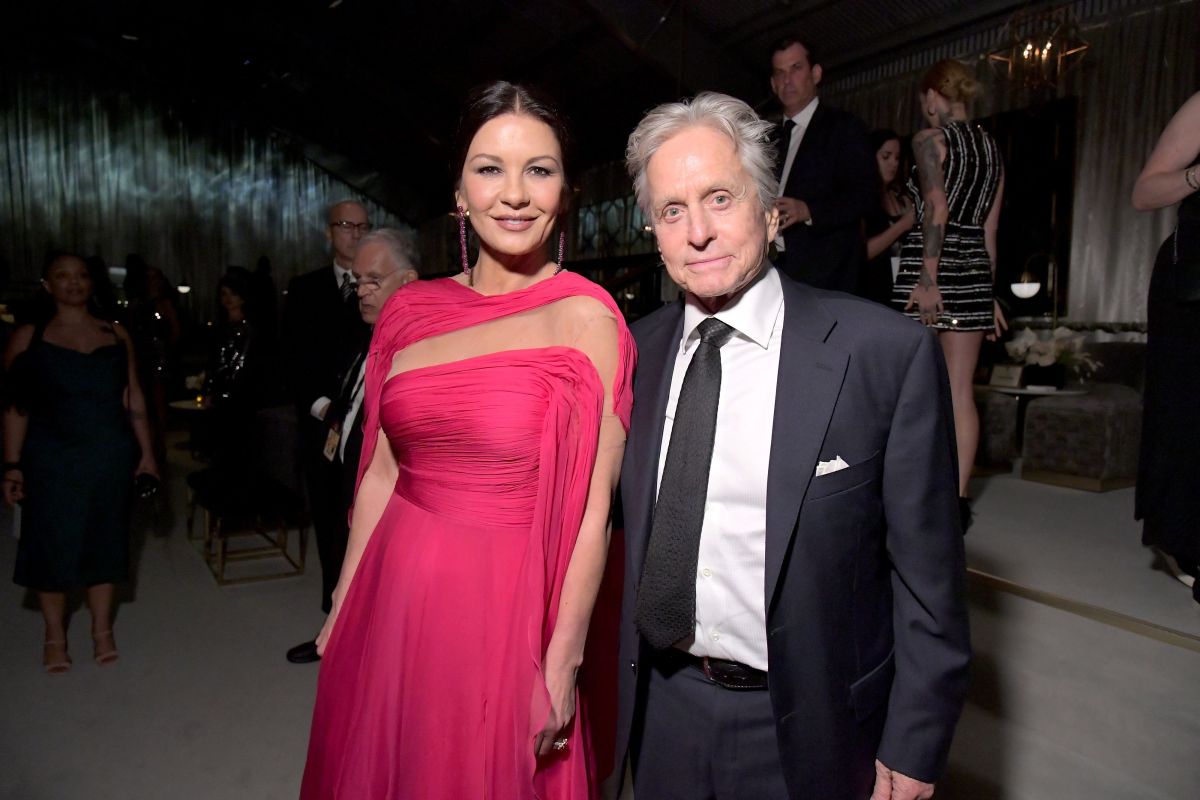 Catherine Zeta-Jones’ tender kiss to Michael Douglas, with a quote from William Shakespeare | The State