Brooke Burke will be 50-years-old this year, but she still looks as if she is in her twenties.

That is because the former Dancing With The Stars contestant and host takes great care of herself with exercise and also by following a healthy diet filled with plenty of good fats.

But the mother-of-four, who has modeled for Maxim and Playboy, also uses a few tricks to keep her glow, which she shared exclusively with DailyMail.com. ‘There are little things I do every day that make a difference,’ the former Wild On! host said.

She does not age: Brooke seen on the left in 2021 and on the right in 2001. The former Dancing With The Stars contestant and host shares with DailyMail.com her five tricks to looking young

Working out is very important to the former bikini model, but she insists no one has to exercise every single day.

‘I work out five times a week and those other two days I relax,’ said the Melissa & Joey actress.

‘It’s important to have down time to collect yourself and give yourself a break. On your days off, just take a stroll in your neighborhood, enjoy it,’ added the 5ft7in looker who is reportedly around 112lbs with a 23in waist.

And she mixes up her routine as much as she can to fend off boredom. Just a young thing getting her start: The actress at the Serving Sara premiere in 2002 She sure has legs: The TV hostess seen in a leopard print swimsuit in early 2020

‘It’s about getting creative and trying new things,’ said the Rock Star host. ‘I use different parts of my home for the workouts. One day I will be in the back yard, another I will exercise in my living room.’

As far as working out at home during lockdown, Brooke told DailyMail.com she likes it and gets her family involved. Brooke has four children: Neriah, 20, Sierra, 18, Heaven, 14, and Shaya, 12. And she is living with real estate real estate developer Scott Rigsby.

The cover girl, who was raised in Tucson, Arizona, also said there are three simple steps that can be done on a floor at home and do not requires any machines. 1. Working out five times a week while targeting certain areas

2. Intermittent fasting, an eating pattern that cycles between periods of fasting and eating

3. Eating plenty of foods rich in good fats such as avocados and macadamia nuts

4. Wearing sunscreen every day to keep the wrinkles at bay

One step was the bicycle move, which women have been doing for decades and Jane Fonda pushed in the 1980s.

Another was the Single Leg Bridge that seemed to have a bit of a yoga influence.

Then there was the Kickbacks which go back to the 1970s when home workouts became a trend.

‘People have been in a funk because of the lockdown due to COVID-19 but working out can be an answer because it makes your adrenaline flow and it improves your mood,’ said the social media staple who was her high school’s homecoming queen.

Exercise promotes chemicals in the brain that improve your mood and make you more relaxed. Specifically, the brain releases feel-good chemicals called endorphins throughout the body. Physical activity reduces anxiety and depressed mood, and enhances self-esteem, according to ULife.

Brooke also shared that it is important to target certain areas like tummy, legs or backside. ‘If you want a flatter stomach focus on strengthening your core, don’t just do cardio. If you want a better booty, do the right moves. You can target your problem areas.’

And she also insisted working out for just five minutes a day can improve your frame. ‘I designed an app which speaks to that. It has been very popular. If you focus just five minutes on one area it does indeed make a difference. Five minutes of lunges a day do pay off. And another thing that’s great is you can do it several times a day and those five minutes suddenly turn into 30 minutes if you want.’ She knows what she is doing: ‘There are little things I do every day that make a difference,’ the former Wild On! host said; seen in 2020

As far as her diet, Brooke says she has been doing intermittent fasting for years and it works.

‘It is one of the easiest ways to lose weight,’ she said. ‘If you can stay in that time frame you have a big advantage.’

Intermittent fasting (IF) is an eating pattern that cycles between periods of fasting and eating. It doesn’t specify which foods you should eat but rather when you should eat them, according to Healthline. Eat only eight hours in a day: As far as her diet, Brooke says she has been doing intermittent fasting for years and it works. ‘It is one of the easiest ways to lose weight,’ she said. ‘If you can stay in that time frame you have a big advantage’; seen in 2020

There is the 16/8 method where one does not eat for 16 hours but then eats within the remaining eight hours.

The red carpet favorite recommends eating plenty of foods rich in good fats such as avocados and macadamia nuts.

‘That is brain food that gives you power and energy,’ she said. ‘I also use a lot of olive oil and coconut oil in my cooking.’

And she takes special care of her skin. Choose well: The red carpet favorite recommends eating plenty of foods rich in good fats such as avocados and macadamia nuts. ‘That is brain food that gives you power and energy,’ she said. ‘I also use a lot of olive oil and coconut oil in my cooking.’ Seen in 2011

‘One of the most important things I do is to wear sunscreen. I am outdoors a lot for exercise and I love to go to the beach, so it is a must.

‘It’s really the best thing you can do for your skin, it stops time in a way.’

She also uses plenty of serums and takes Vitamin C. ‘And I use eye cream twice a day,’ she added, also noting she never goes to bed without washing her face and hydrating.

Brooke has also been using Tru Niagen which increases levels of NAD +, and supports cellular function. Her mini me girls: And with her daughters at a holiday party in Malibu in 2014

‘There is a science behind it, it is amazing for overall well being and better energy, it helps your body metabolize, and is great for skin,’ says Brooke who is a spokesperson for the brand.

‘I take it twice a day. I want a long, healthy life that is full of wellness.’

The 49-year-old star – who got her start modeling lingerie then went on to land the hosting gig for Wild On! in 1999 – also shares a motto for friends to live by: ‘Show up, be committed and simplify your life. I offer tools with my app and I love to inspire people.’

Another trick she has is ‘trying to learn to be present.’ That means taking some time for a walk to enjoy a sunset or listening to a friend. And also to listen to one’s self.

‘It’s a time of fear and change so I try to slow down and listen to my heart,’ she said.

‘I took a year to really find myself after we split, and I think that was a great idea, because I listened to my heart,’ said the star. Her new love: Brooke has been romancing real estate developer Scott Rigsby since 2019

She filed for divorce in early 2020. But the couple of 12-years finalized the terms of their split the year before.

Brooke and David agreed to co-parent their two children, Heaven, 14, and son Shaya, 13, with the kids set to split their time 50/50 between mom and dad.

Brooke has kept the couple’s Malibu home and Santa Monica condo while David is getting a separate Malibu property.

Both stars seem happy to be putting their pasts behind them. David is in a relationship with fitness model Oksana Rykova. Meanwhile, Brooke has been romancing real estate developer Scott Rigsby since 2019. 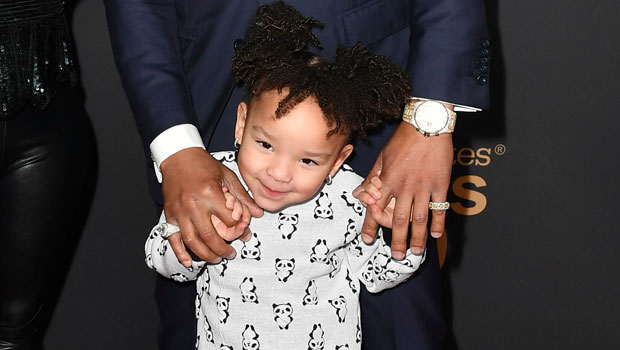 Heiress Harris, 4, Shows Off Her Smarts While Learning How To Read In Adorable Video