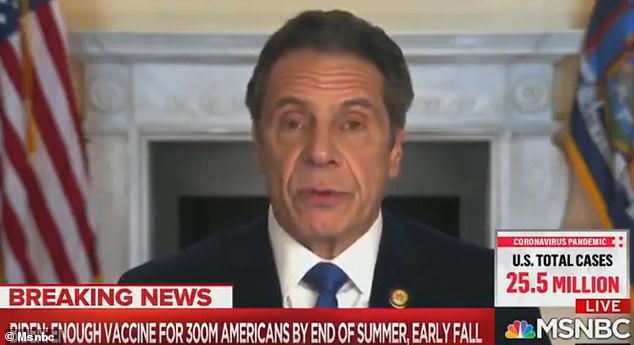 New York Governor Andrew Cuomo has come in for criticism after claiming that  ‘incompetent government’ is responsible for COVID deaths in his state.

Cuomo made the claim during several television interviews on Tuesday and Wednesday laying the blame squarely with Donald Trump.

Cuomo said that Trump’s ‘incompetent federal response’ was to blame for the current crisis the country finds itself in.

But critics quickly turned around to ask whether Cuomo’s decision to allow COVID-positive patients into nursing homes early on in the pandemic might also have been a factor.

‘He’s right. He killed many people,’ wrote one social media user. ‘Is this his confession?’ asked another. ‘Correct, your incompetence killed thousands of elderly New Yorkers in nursing homes,’ posted another user on Twitter.

‘This state, I’m very proud of what New Yorkers have done, because they have rallied. We were ambushed like no other state, and again, it was from federal incompetence,’ Cuomo said.

‘Incompetent government kills people. More people died than needed to die in COVID. That’s the truth,’ he said on MSNBC.

Later in the day, he repeated the same talking point on CNN: ‘Incompetent government can kill people, this is not a joke, and more people died here than needed to,’ Cuomo said.

Cuomo was taken to task on social media as many pointed out that thousands of deaths in New York state needlessly occurred as a result of a decision made last March that required nursing homes to accept patients released from hospitals, despite them being COVID-positive and despite testing deficiencies for both residents and staff.

Cuomo was taken to task on social media as many pointed out that thousands of deaths in New York state occurred as a result of a decision made last March that required nursing homes to accept take in patients released from hospitals, despite them being COVID-positive

It wasn’t for a further two months that the rules were reversed when Cuomo dictated hospitals not to send patients back to nursing homes unless testing negative.

Cuomo signed an executive order on May 11 reversing the policy and ramping up testing for staff.

During that period, roughly 6,326 coronavirus patients were admitted in New York nursing homes, according to the state’s own health department.

Reports have shown that anywhere between 6,400 and 6,700 nursing home residents have died, but The Associated Press suggested in August that due to underreporting, the actual death toll could be higher than 11,000. On Wednesday, Cuomo was more specific that the failures lay specifically with the Trump administration and noted how more recently, they failed to correctly provide an adequate amount of vaccine to the state.

‘The Trump administration announced eligibility, 65-plus, so you take a state like New York, that is seven million people are eligible for the vaccine, 65-plus, healthcare workers, essential workers, etc. Seven million people. We received 250,000 doses per week,’ Cuomo said. ‘So they constructed a tremendous supply and demand debacle.’

During the pandemic, Cuomo wrote a memoir about how he handled the outbreak in New York.

The book, titled ‘American Crisis: Leadership Lessons from the COVID-19 Pandemic,’ was released in October.

In November, the body that awards the Emmy’s which are usually handed out for entertainment, said that it was breaking its own rules to give Cuomo his own award in honor of his daily coronavirus briefings. 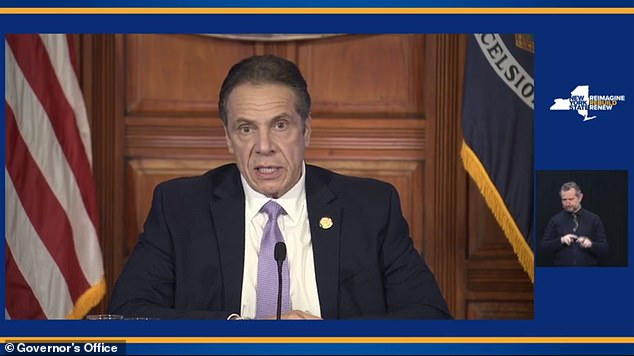 In November, the body that awards the Emmy’s which are usually handed out for entertainment, said that it was breaking its own rules to give Cuomo his own award in honor of his daily coronavirus briefings, pictured 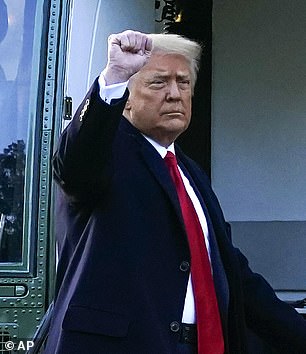 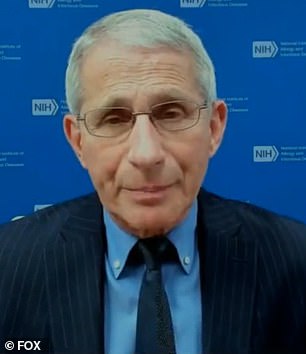 More than 25.5 million infections have been reported in the US since the start of the pandemic The nation’s top infectious disease expert and former head of Trump’s Coronavirus Task Force told Fox News that a constant discussion of the past was ‘not productive.’

Nevertheless, he suggested to the governor that he might want to look at the possibility of helping restaurants out with financial aid given that they are still unable to open in New York City.

‘I understand greatly the strain that is on local businesses and restaurants and others, that that’s the reason why we need help,’ he said. ‘We need to be able to get resources [so] that if indoor dining is going to be prohibited, we’ve got to have help to the owners of those organizations, so they don’t go under during a period of time when we’re trying to correct and get our arms around this outbreak.

Fauci stated that he did not want to go over decisions made under his old boss Donald Trump and instead wanted to look towards the future. Indoor dining was banned in NYC in mid-December just two months after it was finally allowed to resume. Pictured above is outdoor dining in Manhattan About 20.7 million have received at least one dose of the vaccine. About 3.8 million people have been fully vaccinated, according to the Centers for Disease Control and Prevention (CDC)

‘I really don’t want to go back and rehash the Trump administration. That is not productive … A lot of good things did happen with Operation Warp Speed during those months, several months ago,’ Fauci said.

‘Right now, let’s look forward about what President Biden has said, how we’re going to get as many doses in as many people as we can,’ Facui said. ‘That’s why he has his plan, which I want to emphasize, it’s a floor, not a ceiling, to get 100 million doses into people in the first 100 days.’ The Deadline for Requesting Your First Stimulus Check Is Over, But You Have One Last Chance To Get It | The State Archaeology: Remains of a 2,500-year-old royal palace found buried outside the walls of Jerusalem