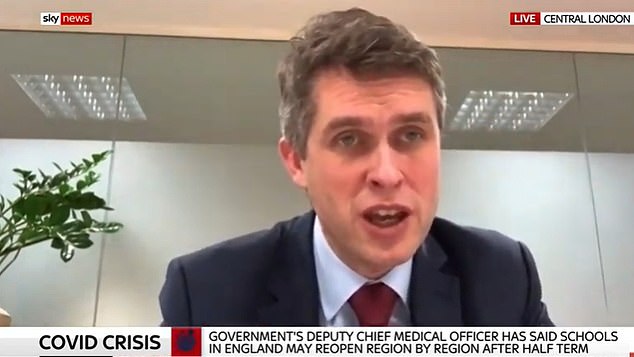 Gavin Williamson today vowed parents will get two weeks’ notice of schools reopening as he insisted children will get priority in easing lockdown.

The Education Secretary said he wanted to get classrooms fully up and running in England at ‘the earliest possible opportunity’.

He said he intended to give families and teachers a ‘clear two-week notice period’, saying they would be the ‘first’ thing to be released from the draconian coronavirus curbs.

And the under-fire Cabinet minister also played down fears over the risk within schools, stressing that they were ‘safe’.

The comments, in a round of interviews, come amid fears of disrupted educations and millions of parents struggling to cope with home schooling since most children were barred from class during the third national lockdown. The government is due to review the plans at the start of February half-term – although it is far from clear that they will loosen the rules.

Mr Williamson said one of the ‘key criteria’ for reopening schools would be whether the pressure on the NHS was lifting.

He brushed off calls by the opposition to resign following a series of policy U-turns.

‘My real focus is making sure that children get back into school at the earliest possible opportunity,’ he told Sky News.

‘Schools were the last to close and schools will very much be the first to reopen.’

Mr Williamson said a further 1.3million electronic devices would be distributed to help with remote learning as schools stayed shut.

He told Times Radio that provision of laptops, tablets and routers were ‘the ultimate safety net’ for disadvantaged pupils.

‘In terms of laptop and tablet provision, there’s already an existing stock within the school system of 2.9million laptops and tablets,’ he said. ‘We’re obviously topping that up, another 750,000 have already been dispatched over the last couple of weeks (and) another 50,000 this week.

Mr Williamson added that he had ‘made it clear to schools’ what was the ‘absolute minimum’ on remote education and had shared the details with parents.

‘We’re making sure there’s that ultimate safety net because there are youngsters that may have a laptop but actually due to the area they live in, due to poor internet connection, aren’t able to access the level of services or aren’t in a situation where they are able to have that type of access.’