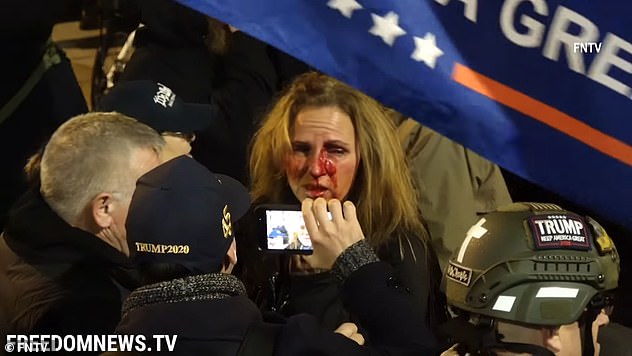 A woman who had a violent altercation with a black security guard prior to the storming of the U.S. Capitol has been ousted from her hospital job after her daughter revealed her identity on Twitter.

Duke said she had worked at UMAss as a medical assistant for 15 years and worries about her future job prospects.

She was identified after her daughter Helena, 18, tweeted video of the confrontation, adding a caption that read: ‘Hi mom remember the time you told me I shouldn’t go to BLM protests bc they could get violent…this you?’

Footage from a protest on January 5, the day before the Capitol riot, shows Duke trying to snatch a phone out of the hands of security guard Ashanti Smith, 28, who immediately wheeled around and jabbed the Trump supporter in the face with her fist.

Smith was also fired after the incident and charged with assault, but insists that she acted in self-defense.

Therese Duke, 50, was fired from UMass Memorial hospital in Worcester, Massachusetts following the January 5 incident (above) in Washington DC 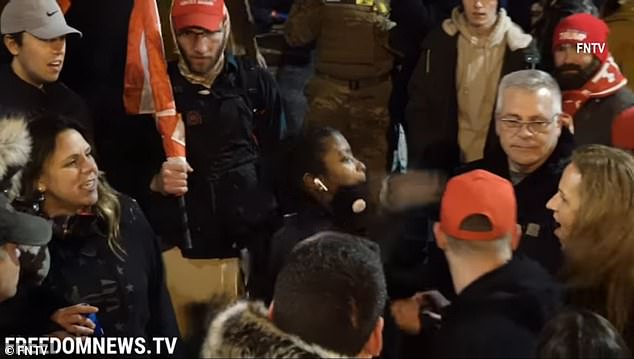 Security guard Ashanti Smith was also fired after the incident and charged with assault, but insists that she acted in self-defense. UMass Memorial released a statement after receiving multiple tips about Duke, appearing to confirm her firing without naming her.

‘Over the past 24 hours, we have received numerous expressions of concern through social media regrading a UMass Memorial caregiver who may have been involved in this week’s violent events at the nation’s Capitol,’ the hospital said.

‘The employee in question is no longer part of our organization,’ the statement added.

After being charged with assault, Smith spoke out to insist she punched Duke in the face in self-defense.

‘I feared for my life. I’m hearing, “Hang her, we’ll kill her, she deserves to die,”‘ Smith told WHUR-FM on Thursday.

‘She kept trying to take my phone and take my mask off because I kept asking them to stay away from me, stop following me, and stop being so close in my personal area,’ Smith said.

Helena Duke, 18, from Massachusetts, took to Twitter in Thursday to identify her mother as a US Capitol rioter who was seen in a viral video being punched in the face by a guard Ashanti Smith, 28, has been fired from her job as a security guard after punching Capitol rioter Helena shared a photo of herself with her mom, who she believes was brainwashed by Trump

She claimed that many in the pro-Trump crowd that had gathered at Black Lives Matter Plaza were calling her the N-word and accusing her of being Antifa.

Video from the incident shows that after Smith threw the punch, the Trump supporters pushed her back toward a wall of cops, who used pepper spray to break up the melee.

Helena said that until about thee years ago, her mother had been a Democrat, but a year into Trump’s presidency she became ‘brainwashed’ by the Make America Great Again movement.

Helena told The New York Post that she only learned that her mother was responding to Trump’s call to attend his ‘wild’ rally after seeing videos online.

According to the teen, her mother told her she was going out of town for three days to drive her aunt to a medical facility to undergo a procedure. To prove the woman in the video is her mom, Therese Duke, Helena posted these two side-by-side photos

‘She didn’t give me any more information about it, she was very vague… When I found out about the Capitol being stormed, I looked at her location sharing and it had been off for two days, so I assumed in that moment, I was like, “Oh my gosh, she might actually be there,”‘ Duke told The Post.

‘And then the next day, my cousin shared a video of her getting punched in the face.’

Helena said initially she had misgivings about publicly shaming her mother, but ultimately she decided to do it because of her mother’s past conduct, including kicking the daughter out of the house for attending Black Lives Matter protests last year.

‘At first I was kind of uneasy about it, but I think it was definitely so hypocritical of her to end up kicking me out of the house for going to peaceful protests because she assumed they’d be violent, and then end up going to this, which was obviously a very violent attack on the Capitol — and end up harassing a cop,’ she said, referring to Smith, who was wearing a security guard uniform at the time.

‘Her actions were appalling and I did not think she could possibly stoop this low,’ Helena told Newsweek. ‘Seeing her harass a black woman and attending a violent event is very hypocritical of her.’

Helena said that her aunt and uncle also took part in the unrest in Washington DC. 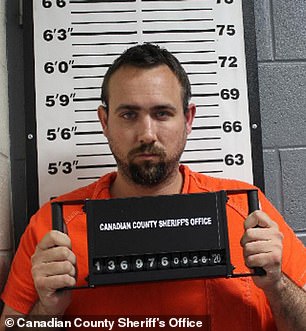