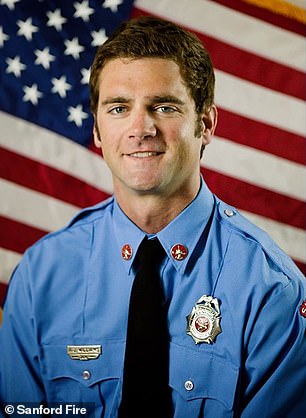 Sanford firefighter and paramedic, Andrew Williams (pictured), was arrested by the FBI on Tuesday

A Florida firefighter has been arrested by the FBI after he was spotted wearing a Trump hat inside the Capitol while it was under siege by MAGA supporters.

Sanford firefighter and paramedic, Andrew Williams, was taken into custody on Tuesday, according to a statement from the fire department’s chief Crag Radzak.

Following his arrest, Radzak said Williams was placed on administrative leave without pay pending the results of the criminal investigations.

Radzak said the Sanford Fire Department was made aware of information regarding the possibility of a firefighter’s involvement in events that took place last week at the Capitol in Washington, DC.

‘Along with the information, a photograph was submitted that depicts a male, identified as Andrew Williams. The picture appears to show Williams inside the Capitol Building during the unlawful entry made by protesters,’ Radzak said in the statement.

Williams has been charged with one count of unlawful entry of a restricted building and one count of disorderly conduct on Capitol grounds.

‘We hold the men and women in this department to the highest standards. It saddens me that the actions of one individual have tarnished the hard work and dedication that the rest of the department puts forth on a daily basis,’ Radzak said in the statement. Williams was arrested after he was identified in a photo that was sent anonymously to the WKMG news station. Williams is seen wearing a ‘Trump 2020’ hate while pointing to a placard with Speaker of the House Nancy Pelosi written on it

‘Our investigation will continue in conjunction with the current federal criminal investigation,’ Radzak said.

‘As is policy with any type of policy violation, including a criminal violation, an internal administrative process must be followed in order to ensure a thorough investigation with a just conclusion. I ask for the public’s patience as we move through this process,’ he added.

Williams was arrested after he was identified in a photo that was sent anonymously to the WKMG news station.

In the image, Williams is seen wearing a Trump 2020 hat while pointing to a sign for House Speaker Nancy Pelosi.

During the riot, Pelosi’s office was vandalized and several rioters were seen taking pictures at her desk. According to WKMG, Williams appeared in court on Tuesday and a judge set his bond at $25,000.

He was released from custody under the restrictions that he would need to surrender his passport and travel. Williams was also ordered to surrender any firearms in his possession and submit to mental health evaluations and drug tests.

He appeared in court on Tuesday and a judge set his bond at $25,000. Now that he has been released from custody, he will need to surrender any firearms and his passport, restrict his travel and submit to mental health evaluations and drug tests.

Williams could receive a fine or up to six months in prison if he’s convicted. And Williams isn’t the only firefighter that was photographed at the Capitol last week. Federal agents are investigating claims that New York City firefighters participated in the Capitol siege Several people have been charged in the incident. Among them are West Virginia delegate Derrick Evans, 35, Adam Johnson, 36, who was photographed carrying off Pelosi’s podium, and Richard Barnett, 60, who was pictured with his feet on Pelosi’s desk

And Williams isn’t the only firefighter that was photographed at the Capitol last week.

One rioter was spotted wearing an FDNY jacket – which read FDNY Squad 252 -outside the Capitol. Squad 252 is based out of Brooklyn. The firefighter has not been named but is said to be retired.

FDNY told  New York Daily News that they had received anonymous tips offs about at least one current New York firefighter who was not wearing his uniform during the siege but was recognized from the footage.

FDNY spokesperson Frank Dwyer told the newspaper that ‘The department received anonymous allegations that active or retired members were present at the events at the United States Capitol on January 6 and, as required, has provided that information to the FBI.’

It’s unclear what information was given to federal agents, but officials told the newspaper no arrests or suspensions have been made in association with the riot.

Several people have been charged in the incident. Among them are West Virginia delegate Derrick Evans, 35, who was newly sworn in when he streamed himself entering the Capitol on Facebook Live; Adam Johnson, 36, was photographed carrying off Pelosi’s podium, and Richard Barnett, 60, who was pictured with his feet on Pelosi’s desk.

Charges in the cases include assaulting police officers, entering restricted areas of the Capitol and stealing federal property. More cars and fewer parking spaces: another consequence of the pandemic in New York | The State 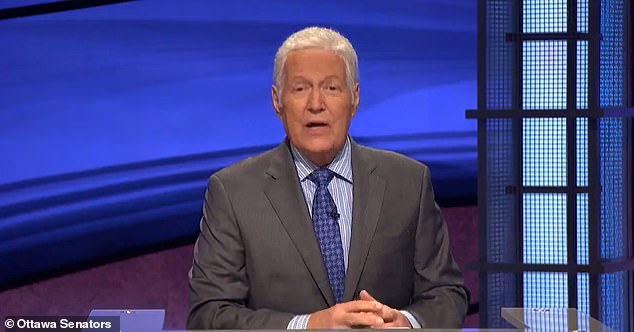