To some extent, say experts in the tech-led fitness and diet space, as they talk about how the COVID-19 pandemic and lockdown gave digital products a boost that’s likely to stay

In a departure from raucous partying on New Year’s Eve, 10,000 people celebrated across HealthifyMe’s social media channels, in a ‘Digital Dance Party’ with DJ GoApu. It was symbolic of 2020, a year during which most of us had been indoors and glued to screens. People attended free of cost, as cities in India went under a night curfew in view of COVID-19. The event was meant to kick off the diet-fitness platform’s FitFest 21, an app-only festival to promote the ecosystem of healthy living.

Last year, HealthifyMe helped people collectively lose two million kilograms in nine months, against the previous year’s one million kilograms, according to co-founder and CEO Tushar Vashisht. They are not the only ones operating in the tech-driven diet-fitness space that claim to have benefited from 2020’s home-bound, immunity-chasing, fear-ridden India.

Akshay Verma, co-founder, Fitpass that offers access through a single membership to over 4,000 gyms and fitness studios across 17 cities, and also has fitness and diet solutions, says that during October to December 2020, business grew by 25-30% compared to the same time in 2019. This, considering the last quarter is usually the leanest in the year for the fitness industry.

Sarvesh Shashi, founder of SARVA that focusses on yoga-based wellness, says the platform recorded 1,440 hours of yoga and meditation videos over the last year. Their 60+ on-ground studios were shut, and the app took precedence, requiring them to do a pivot to a digital-only model.

The tech-driven fitness and diet space has grown and continues to do so, in the wake of people like you and me becoming proactive about preventive health and needing tools to measure progress. At a time of paycuts, reduced mobility, and anxiety about the future, we wanted something affordable, accessible, and fun. Technology gave us that, beaming live workouts into our homes, some of which just had space for a yoga mat on a balcony.

Internationally, technology became a diet and fitness enabler about 15 years ago, going from calorie recorders to GPS-led fitness trackers, aggregators of studio classes, wearables, and now, AR screens that monitor training (See ‘At strong start’ below).

In India though, we are still tracking steps and food intake at the most basic level. Startups want to capitalise on this, moving across geographies, lapping up and retaining as many ‘users’ as possible. This is different from the West, where brands are going deeper into a handful of homes with more involved tech. During the pandemic — still not over — online ads were cheaper, because there was little marketing by the entertainment sector (cinema halls, for instance, opened two months after fitness centres). People were online a lot, so targeted advertising was easier. This resulted in a drop in the cost of acquisition per person, says Verma.

Despite the fact that we are playing catch-up with the West in terms of fitness, what makes it exciting is that the focus is on technology amping up efficiency: HealthifyMe’s ‘AI dietician’ Ria has brought in 30% of their business during the past year, while Fitpass’ ‘AI trainer’ ARIA did well too with gyms being shut for about seven months.

In addition, there’s a certain Indian-mindset tech tweaking. As consumers, we are easily bored, lack discipline, and simply must have dessert at the end of the meal (hello rewards and recognition). StepSetGo, a winner in the Aatmanirbhar Bharat App Innovation Challenge, for instance, found a drop in steps taken and an increase in screentime, in the initial days of lockdown. The platform uses a simple pedometer coupled with gamification (a leaderboard, coins earned, and levels achieved) and gratification (through rewards) to get people to move more. Tech here is still motivating people towards an overall healthier lifestyle.

StepSetGo introduced the FitGames challenge, where online games on their app locked you out until you had taken a few steps. Being gamers themselves, the founders draw from the gaming industry. “The problem is not how to count your steps. The problem is how to keep up your motivation,” says Shivjeet Ghatge, co-founder and CEO. Today, with pandemic fatigue it’s all the more important.

One of StepSetGo’s key features is social engagement, important in a year we were all physically distant, and suddenly realised the importance of community. Fittr that offers motivation and coaching services, split its larger WhatsApp group into smaller ones, each headed by a coach, to make things more intimate, so people would share more.

It wasn’t all fun and games though. Diet and fitness professionals lost jobs and many aggregators have been forced to offer huge discounts on their monthly plans, and even the big players like cult.fit were it, though it has reopened more than half its gyms now.

The companies that could evolve their tech quickly though (and those that had large funding, like cure.fit’s $400 dollar investment), did catch the tailwind, as Ashish Sharma, CEO, InnoVen Capital India, describes it. “Indians typically haven’t focused on fitness, but over the last 8-10 years, there has been an increased consciousness around what one eats and fitness goals, in no small part driven by social media and positive role models like Virat and Hrithik, so people want to look good,” he says. Purchasing power has increased too. The point he’s making is that we were already on our bicycles pedalling (albeit slowly), so companies could indeed catch the tailwind.

Sharma’s company, a venture debt firm, has cure.fit and HealthifyMe as a part of its portfolio. It also a few in the health space (1MG, DocsApp), amongst others. As an aside, he says that “players in the diet-fitness space had to disrupt faster, because their success required new products.” They were also “driving long-term behaviour changes and cultivating new habits.” On the other hand, “health space startups caught tailwinds during the pandemic on account of existing platform with efficient system for delivery.”

Founders breathed tech, and as they came up with newer offerings, their appreciation for it went up. “It’s the reason we were able to do what we did,” says Verma, who says they quickly got trainers online, linking them with people who could not go to the gym. Cult.fit in fact, “will continue to run offline businesses, but only in fitness, and will look for digital products in all other health verticals (mental health, medical care),” says Ankit Gupta, Head of Engineering and Org Operations. What has not changed is that most of these companies, with tech-trained leaders at the helm, continue to say that tech is the foundation of the business.

Sanil Sachar, Founding Partner, Huddle, a startup accelerator based in Gurugram, says he keeps reminding founders that technology is just an enabler. “You’ve got to mask it, make a product simple, though the problem may be complex. At The Healthy Company (a nutrition solutions venture), for instance, the AI that tells you what to eat, when to eat, is not the reason the consumer comes in. People should be able to forget that it’s a bot they’re talking to,” he says.

He also makes a difference between true tech and a placebo. A device that prompts you to wash hands and speaks to you about washing for less than 20 seconds is placebo, he says, of the many services that came up in response to handwashing guidelines and some of the pandemic paranoia. “If it is tracking progress — that’s tech.”

In a surprise from pandemic times, outdoor games have gained people’s confidence. It’s one of the reasons Arjun Singh Verma, COO, Hudle, a discovery-and-booking app for sports facilities, remains optimistic (he expects a 4x growth this year). Another reason is that the company has just raised an undisclosed amount in a pre-series A round of investment.

“In the initial days of unlock, people were booking individual sports like badminton and tennis,” he says. Today, cricket and football have picked up too. It’s eye-opening that Delhi has about 100 football turfs, where Kochi has double, opening up the prospect of taking the service to tier 2 cities where many aggregating apps don’t go, but infrastructure exists.

Hudle is also offering training to people who may never have played a sport before: like football training for women across ages. Perhaps next year, we’ll celebrate New Year’s Eve on a football pitch. Naturally, we’ll book it through an app and link with people digitally to form a team. Hopefully though, we will meet in person, to celebrate health and togetherness.

International tech-driven startups operating in the fitness and diet space captured our imagination, but never went mass in India. “They were too expensive, we weren’t used to paying for apps, internet connectivity was sketchy, and the fitness community itself was very small so people just never got to know about them,” says Gagan Dhillon Khullar, who worked with Women’s Health magazine in India heading the fitness vertical. People with minimal body fat that seemed too hard to achieve and foods that were alien, were other reasons. What these companies did was to make tech associated with fitness and diet sexy.

2005: MyFitnessPal began as a calorie-tracking app in 2005, when founder Mike Lee wanted to lose weight before his beach wedding. Launching first as a website and then as an app in 2009, after the iPhone App Store came into being in 2008, it was the original digital diet-and-weight-loss companion. You could simply feed in ‘burger’ for instance, and a predetermined calorific value would appear, making it easy to calculate your calories intake. This wasn’t available for Indian food though, which meant you had to feed in ingredients. The company was bought by Under Armour in 2015 for USD 475 million and announced its sale recently for a considerably lower price.

2006: The Nike+iPod Sport Kit came into being, bringing together cool shoes, a device that played music and spoke to you with updates on speed and distance, tech tracking that recorded a training log, and a lifestyle that only a few could afford but everyone wanted. It had a shoe-mountable sensor and a small transmitter that plugged into the iPod Nano’s dock connector. Nike Training Club was launched in 2008.

2007: Endomondo, named after the endorphins released after a bout of activity, came out as the original fitness social network for runners and cyclists. It breathed its last on December 31 last year 2020, retired by Under Armour who had acquired it the same year as MyFitnessPal. MapMyRun also came into being the same year, and also got taken over by Under Armour in 2013. The now popular running-cycling tracker and fitness community builder Strava came out only in 2009.

2009: Fitbit was the first wearable device we all coveted, though Garmin had released the first wrist-based GPS trainer in 2003. Suddenly, taking 10k steps became a movement, and the company went on to be listed in 2015. Alphabet, Google’s holding company, is acquiring it for dollars 2.1 billion, though it has had to commit to Europe not to use Fitbit’s huge data for ad targeting for 10 years. The Apple Watch came into being only in 2015.

2013: Peloton, the at-home stationary bike fitted with a touchscreen to stream live sessions (through subscriptions) was built on the popularity of New York’s cult in-studio SoulCycle and Flywheel. Forbes reports that it was recently added to the NASDAQ 100 stock index. Mirror, a full length reflective glass that turns into an at-home interactive fitness device with a studio-like experience, was started in 2018, and was acquired by fitness apparel brand Lululemon for 500 million dollars last year. Hydrow, launched in 2019, markets itself as a “live outdoor reality” connected equipment (you’re pictured rowing on the water). 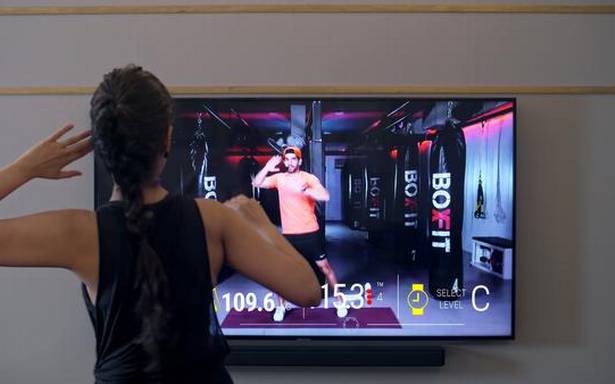 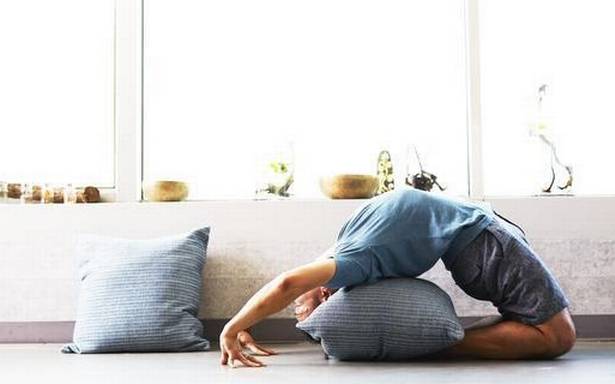 COVID-19: During lockdown, stay fit at home with a little push from workout buddies