Donald Trump has started putting together a defense team for a second impeachment trial with Rudy Giuliani and Alan Dershowitz said to both be in the running.

Two sources told CNN Giuliani, Trump’s personal attorney and the man who spearheaded the president’s failed legal efforts to overturn the presidential election, is expected to represent Trump if the unprecedented event of a second impeachment trial materializes.

The sources said Trump is also considering hiring Dershowitz, the controversial celebrity attorney who represented him at his first impeachment trial in December 2019 for abuse of power and obstruction of Congress.

Dershowitz, who has infamously worked on the defense teams for OJ Simpson, Jeffrey Epstein and Harvey Weinstein, said it would be an ‘honor and privilege’ to defend the president for a second time.

House Democrats will introduce their impeachment resolution on Monday charging Trump with ‘incitement of insurrection’ for his part in stoking up the mob that stormed the US Capitol Wednesday in a riot that sent shockwaves around the world and left five dead.

However, Senate Majority Leader Mitch McConnell said the earliest a second trial would begin is Inauguration Day because the Senate is in recess until January 19.

Donald Trump has started putting together a defense team for a second impeachment trial with Rudy Giuliani and Alan Dershowitz said to both be in the running. Trump at Wednesday’s rally where he egged on his supporters 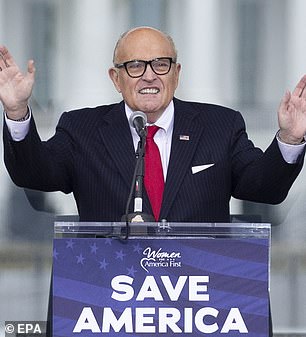 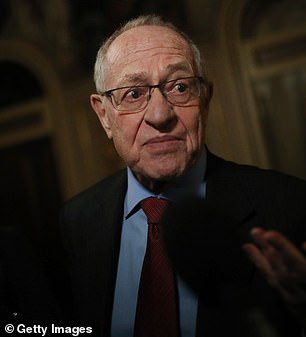 Two sources told CNN Giuliani (left), Trump’s personal attorney and the man who spearheaded the president’s failed legal efforts to overturn the presidential election, is expected to represent Trump. Dershowitz said it would be an ‘honor and privilege’ to defend the president

Dershowitz appears to already be readying himself for the role of defending Trump, as he told Politico Wednesday’s rally where Trump egged on the crowd to march to the US Capitol was a ‘constitutionally protected’ speech.

He denied that the president is guilty of ‘a high crime or misdemeanor’ or is ‘unable to govern’ and instead hit out at the Democrats and Republicans pursuing impeachment.

‘It’s not a high crime or misdemeanor. What he said was protected by the First Amendment and it’s not subject to removal under the 25th Amendment,’ Dershowitz said.

‘He’s not unable to govern, he’s not incapacitated and I think grave dangers to the constitution are being posed by those partisans who want to weaponize the Constitution for political purposes.’

Jay Sekulow, who was also a member of Trump’s first impeachment trial defense team, said pursuing an impeachment now would be ‘a gigantic mistake’ on his radio show Sekulow on Thursday.

‘You could impeach him but he’s never going to be there for the trial. They’ll never have a trial in the Senate,’ he said.

‘Why would you put the country through that when the man’s term is over with and you got the ultimate victory your candidate is going to be the president of the United States?’ House Democrats will introduce their impeachment resolution on Monday charging Trump with ‘incitement of insurrection’ for his part in Wednesday’s riot. At the rally he told fans to ‘fight’ That said, CNN reported that Sekulow and two other members of Trump’s old defense team – White House counsel Pat Cipollone and attorney Jane Raskin – are not likely to join his team a second time round.

Cipollone led Trump’s defense during his first trial but is said to be on the brink of resigning out of frustration with Trump and him bringing in conspiracy theorist lawyer Sidney Powell, who has argued voting machines changes votes from Trump to Joe Biden.

Dominion Voting Systems is suing her for the false claims about their machines.

It also emerged that Trump only agreed to his national address Thursday night – where he finally denounced the actions of the mob more than 24 hours after the violent insurgent – after Cipollone warned him he could face legal charges for stoking the mob, The New York Times reported.

Cipollone is said to have stayed in the White House for the sake of national security.

Meanwhile, Robert Ray, who was also on the president’s first defense team, appeared to also signal himself out of the team when he told Politico he thinks the case for impeachment is stronger this time round. 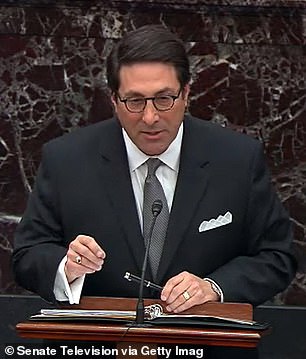 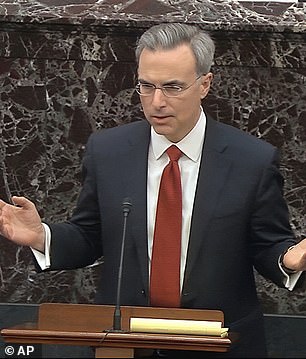 ‘Unlike the last time, where they didn’t even charge a crime, I could imagine that you could draft an article of impeachment that would actually make a legal argument that the president aided or abetted or actually elicited a riot,’ said Ray.

Giuliani was not part of Trump’s first team but led the president’s failed election legal battle to overturn the election.

The former New York City mayor worked with Trump to push unfounded claims of voter fraud – claims that were not been backed up with evidence, failed to gain any ground in dozens of lawsuits and were debunked by Trump’s own administration which said the election was fair and legal.

Biden won the presidential election with 306 electoral votes to Trump’s 232.

Trump, his campaign and Republicans have mounted at least 42 legal challenges since November 3, all of which they have lost.

Meanwhile, Giuliani may also find himself investigated for his part in Wednesday’s violence. 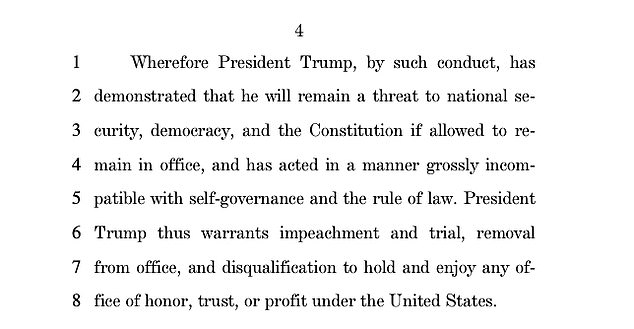 Less than two hours before hundreds of Trump supporters stormed the capitol Wednesday, Giuliani took to the stage at Trump’s rally and urged demonstrators to pursue a ‘trial by combat’.

‘Donald Trump Jr, Giuliani, even the president of the United States were calling on their supporters and hate groups to go to the Capitol and in the words of Rudy Giuliani ‘exercise combat justice’.

‘We’re going to investigate not only the mobsters but also those who invited the violence,’ he said.

If Giuliani does make the team, the president will hope he can have greater success at his potential second impeachment trial.

The move to impeach a sitting president for a second time is an unprecedented event in American history. House Rep. Ted Lieu of California announced on his Twitter feed Saturday that 180 members of Congress have signed as co-sponsors of the article of impeachment that he helped draft alongside fellow House Reps. Jamie Raskin and David Cicilline

Trump’s initial impeachment trial came after it emerged that he had pressured the Ukrainian president for information on Joe Biden and his son Hunter Biden.

He was impeached in December 2019 for abuse of power and obstruction of Congress but was acquitted by the Senate in February after only one Republican – Mitt Romney – broke from party lines to back the impeachment article.

It is not clear if a second attempt would be more successful but some Republicans have already suggested they are open to impeachment this time.

And Alaska Senator Lisa Murkowski, who also voted to acquit, told the Anchorage Daily News on Friday that she wants Trump to resign.

Two Republican Congress members told CNN they would support impeachment with one saying ‘I think you will have GOP members vote for impeachment.’

Democrats will present the impeachment article which accuses Trump of ‘incitement of insurrection’ Monday, marking the first stage in the process.

House Rep. Ted Lieu of California announced on his Twitter feed Saturday that 180 members of Congress have signed as co-sponsors of the article of impeachment that he helped draft alongside fellow House Reps. Jamie Raskin and David Cicilline. Trump’s first impeachment trial which started in December 2019. Pictured the trial on January 16 at the US Capitol

Lieu said that while all 180 co-sponsors are Democrats, he is confident that Republican members of the House will support to impeach.

A draft of the article prepared by Cicilline, Lieu, and Raskin states that, ‘Incited by Trump, a mob unlawfully breached the Capitol,’ injured law enforcement, menaced lawmakers and the vice president, and interfered with the count of the Electoral College.

McConnell, the Kentucky Republican, circulated a memo to the other members of his caucus in which he mapped out how a Senate trial would work if the House of Representatives follows through on its threat to impeach Trump.

In the memo, McConnell notes that the Senate will not reconvene for conventional business until January 19 – just a day before Biden’s inauguration, according to The Washington Post.

Senate impeachment rules state that the upper chamber could begin a trial a day after it agrees to receive the articles of impeachment from the House.

That means Minority Leader Chuck Schumer, who will take up McConnell’s post as majority leader after Biden is sworn into office, will have to take up a trial.

An impeachment trial of Trump in the early days of Biden’s presidency could distract from the new administration’s efforts to get its agenda off the ground.

The move to impeach Trump for a second time comes in the wake of Wednesday’s riot at the US Capitol where Trump supporters broke through barricades and entered the seat of government sending lawmakers fleeing for their lives.

Protesters were riled up by the president during a rally near the White House where he told them to head to Capitol Hill where lawmakers were scheduled to confirm Joe Biden’s presidential victory. A violent mob then stormed the Capitol, breaking through police barricades and smashing windows to enter the building.

Lawmakers were forced to go into hiding for several hours as Capitol police grappled to take back control while the mob defecated in the Senate and House, invaded Nancy Pelosi’s office and looted items potentially including state secrets.

Five people were killed in the violent riot including a police officer who was reportedly hit over the head with a fire extinguisher by a rioter.

Three top Capitol security officials have stood down as questions are being raised over the failure to stop the breach occurring in the first place.

Dozens have been rounded up and arrested since the attack including a QAnon supporter, a 70-year-old who brought two handguns, a rifle and 11 Molotov cocktails to the riot and a newly sworn-in West Virginia delegate.

The FBI is asking for the public’s help in bringing all those responsible to justice.

Meanwhile, House Democrats will start proceedings to impeach Trump Monday charging him with ‘incitement of insurrection’ after he egged on his supporters and then failed to condemn the violence or tell them to leave the Capitol for hours after the violence erupted.

Twitter banned the president from its platform Friday saying in a statement that his recent tweets amounted to glorification of violence. 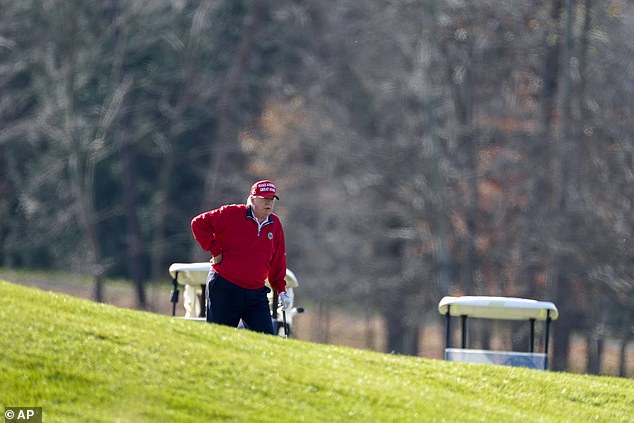