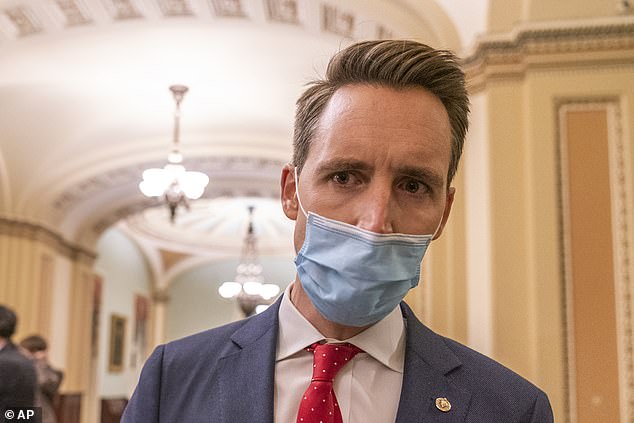 Sen. Josh Hawley assigned no blame to himself for Wednesday’s MAGA mob that trashed the Capitol Building, despite giving a clinched-fist salute to the crowd before the siege.

Hawley was first asked whether President Donald Trump should be blamed for the riot, which left four dead.

‘I don’t think urging people to come to the Capitol was a good idea,’ he told CNN’s Manu Raju.

Hawley was branded a traitor after he gave a clinched-first salute to the mob of waiting Trump supporters as he arrived on Capitol Hill for Wednesday’s joint session of Congress to certify the Electoral College count in favor of President-elect Joe Biden.

Hawley was the first senator who said he’d support a House GOP plan to challenge some of the Electoral College votes from swing states – an effort Trump supported, as it extended the farce he was feeding to his supporters that the election result could be overturned.

Sen. Josh Hawley told CNN Thursday, ‘The responsibility of violent criminal acts is with violent criminals,’ though he added that he didn’t President Donald Trump’s urging of people to come to Capitol Hill Wednesday was a good idea Hawley was branded a traitor for his clinched-fist salute to President Donald Trump’s supporters before they clashed with police and stormed the U.S. Capitol Former Republican National Committee Chairman Michael Steele said that the image of Sen. Josh Hawley raising his fist in support would become a ‘symbol of sedition’ Hawley was also photographed giving Trump supporters a thumbs up. That crowd would later break inside the Capitol Building in a violent siege that lasted hours 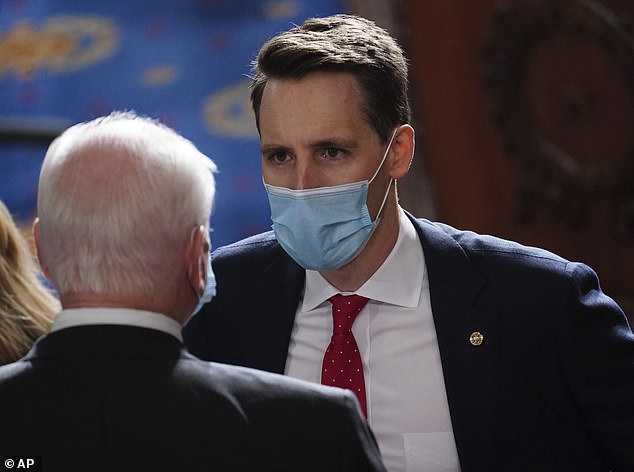 Trump supporters try to break through a police barrier set up around the U.S. Capitol Building to protect lawmakers as they certify the Electoral College results An objection to Arizona was being debated when MAGA-backing rioters mobbed Capitol Hill.

‘Thank you to the brave law enforcement officials who have put their lives on the line,’ his office tweeted around 4:30 p.m. ‘The violence must end, those who attacked police and broke the law must be prosecuted, and Congress must get back to work and finish its job.’

Hawley also sent out a fundraising plea as the chaos kicked off, according to the Kansas City Star.

That paper’s editorial board lashed out at Hawley, headlining the piece, ‘Sen. Josh Hawley has blood on his hands in Capitol coup attempt.’

‘Hawley’s actions in the last week had such impact that he deserves an impressive share of the blame for the blood that’s been shed,’ the op-ed argued.

On Twitter, the picture of Hawley, outside the Capitol Building, with a raised left fist quickly circulated.

‘The picture (among many) we will all remember from what we’ve witnessed today @HawleyMO – you are @realDonaldTrump’s symbol of this sedition,’ tweeted former Republican National Committee Chairman Michael Steele, who’s a Trump critic.

‘None of today’s violence happens without the seditious actions of @HawleyMo,’ de Blasio wrote. ‘He sparked a violent incident that endangered lives and threatened the sanctity of our democracy just to further his own political ambitions.’

‘He doesn’t deserve his seat. He should resign immediately,’ de Blasio said.

Walter Shaub, the former director of the United States Office of Government Ethics, called Hawley the ‘leader of the insurrection.’

‘Senator Josh Hawley is the epitome of a privileged American upbringing and education, and look how he has paid it back to our society,’ historian Michael Beschloss tweeted.

For weeks, Trump has misled his supporters into believing that his election loss could be overturned by Congress.

Lawmakers are able to object, debate and then vote on states’ tallies – but the votes for that effort to be successful simply weren’t there, nor does Congress truly have the power to overrule the Electoral College count, most scholars believe.

For this reason, Senate Majority Leader Mitch McConnell begged members of his caucus not to join House GOP efforts to object to the results – as a House member and a senator are both needed to move the process forward.

Before rioters broke into the Capitol Wednesday, McConnell made a floor speech saying just as much.

‘We’re debating a step that has neve been taken in American history, whether Congress should overrule the voters and overtrun a presidential election,’ McConnell said.

The Kentucky Republican discouraged the objections because there was no evidence of widespread voter fraud, as Trump has falsely claimed.

‘But my colleagues nothing before us proves illegality anywhere near the massive scale, the massive scale that would have tipped the entire election,’ McConnell argued. ‘Nor can public doubt alone justify a radical break, when the doubt itself was incited without any evidence.’

Still, Hawley kept Congress in session until the early hours of Thursday when he single-handedly signed onto an objection to Pennsylvania’s Electoral College vote count.

That prompted two more hours of debate in the House.

McConnell swiftly brought the objection to a vote and it was overruled 92-7.

Earlier, when the Senate came back into session to debate the Arizona challenge, Hawley had argued, ‘Violence is not how you achieve change.’

‘And that’s why I submit to my colleagues that what we’re doing here tonight is actually very important. Because fo those who have concerns about the integrity of our elections … this is the appropriate means, this is the lawful place, where those objections and concerns should be heard.’

He said he hoped the Senate could address concerns ‘peacefully, without violence, without attacks, without bullets.’

He used his time, then, to knock the way Pennsylvania carried out its election.

‘And so Mr President let me just say now, that briefly, in lieu of speaking about it later,  a word about Pennsylvania – this is a state that I have been focused on, objected to,’ Hawley said.

He then went on to complain that the state set-up ‘universal mail-in balloting.’

‘And did it irregardless of what the Pennsylvania Constitution says,’ Hawley said, using the improper word for regardless.

Pennsylvania Democratic Rep. Conor Lamb pointed out that Pennsylvania’s system had been set up by Republicans in his state.