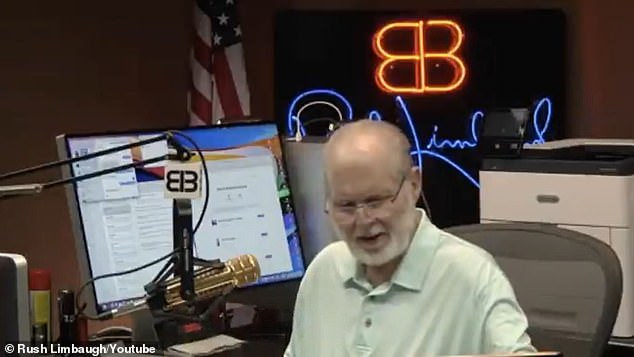 Conservative talk show host Rush Limbaugh drew comparisons between the leaders of the American Revolution and yesterday’s siege at the Capitol building in Washington D.C. rebuking those ‘calling for the end of violence’.

Limbaugh, 69, took aim at liberals who protested this summer, claiming they were anarchists using the Black Lives Matter movement as a ‘guise’.

He continued, saying he forgave yesterday’s group of rioters who were simply ‘fed up’.

Conservative radio host Rush Limbaugh took aim at liberals who protested this summer, claiming they were anarchists using the Black Lives Matter movement as a ‘guise’

‘We’re supposed to be horrified by the protesters,’ Limbaugh said on his program on Thursday.

‘There’s a lot of people calling for the end of violence. There’s a lot of conservatives, social media, who say that any violence or aggression at all is unacceptable. Regardless of the circumstances,’ he said.

Both Adams and Paine were Founding Fathers of the United States who protested British taxation without representation, uniting the American colonies in the fight for independence during the Revolutionary War.

Limbaugh has been one of President Trump’s most ardent supporters. The day after revealing he had cancer, Trump invited him as a guest for his State of the Union – where he awarded him the Presidential Medal of Freedom. ‘Yesterday, hundreds of thousands of people — Americans who have gotten tired of being ignored and lied about and smeared as racists by these very Democrats in the media and the popular culture,’ the conservative radio icon told listeners.

‘Americans who have gotten fed up with having election stolen from them by the Democrats, including the White House. Now they think two more Senate seats have been stolen, and they thought they were going to be stolen even before the election.’

Limbaugh attempted to further excuse the actions of those who participated in Wednesday’s violence suggesting Republicans do not know how to protest or loot despite thousands of Trump supporters appearing at the Capitol.

‘A tiny minority of these protesters and undoubtedly including some Antifa Democrat-sponsored instigators did decide to go to the Capitol to protest,’ he added without providing any evidence. ‘The people’s house by the way.’ Limbaugh then went on to share his frustration by making false claims stating how no Black Lives Matter protesters were arrested for their actions over the summer.

On the first day of June alone, more than five times the number of people were arrested than in the breach of the Capitol, according to Forbes.

Just 52 people were arrested in Washington after Trump supporters stormed the U.S. Capitol.

The number pales in significance compared to the number of arrests made in D.C. during protests for racial justice last summer after George Floyd was killed in police custody.

Between May 30 and June 2 2020, the height of the racial justice protests, 427 ‘unrest-related’ arrests were made, according to Forbes. ‘As recently as this time last year, anti-Trump protests were held in the Capitol during the impeachment. All of the sudden protesting Congress is being called the end of the world,’ Limbaugh said.

‘Can’t have this. The worst crime against democracy in our nation’s history. And yet, all kinds of anti-presidential protest were held in the Capitol during the impeachment and nobody was concerned about it in terms of the damage being done to our government institutions.’

In making the comparisons Limbaugh failed to point out the differences between the two protests. The city saw violent protests in the weeks following police killing of George Floyd in Minnesota back in May, and the chaos seemed to re-erupt in August, the final night of the Republican National convention, when six officers were hospitalized

The Capitol was never forced to shut down because of violence during the impeachment hearings and there were never any suspected bombs found on the premises. The building wasn’t stormed and nobody was killed.

Limbaugh is currently under going treatment for cancer. He was diagnosed in February after learning about it last January.

Limbaugh was diagnosed with Stage IV advanced lung cancer and shared in October that treatments were no longer working, meaning he was going to die.

But despite his health worries, he has continued to host his radio show which has been in national syndication since 1988. He missed several shows in October for treatment.

Limbaugh has been supportive of Trump’s false claims that the election was ‘stolen’ from him and last year received the Presidential Medal of Freedom from Trump during a State of the Union Address. Are salads really a healthy option? Know which are the best and worst alternatives | The State 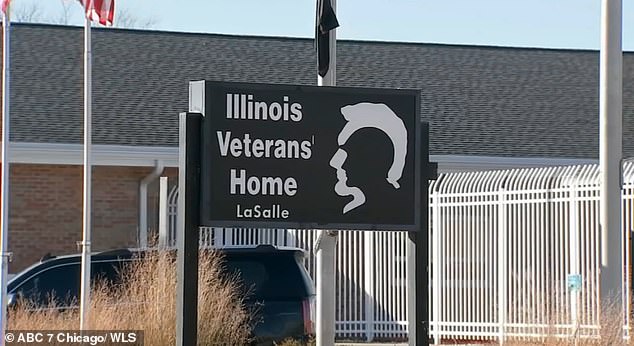