Movers were spotted carrying boxes filled with donations for the Salvation Army out of Jared Kuschner and Ivanka Trump’s Washington DC home on Thursday, just 24 hours after a MAGA mob laid siege to the US Capitol Building.

The image was first shared to Twitter by Yahoo reporter Hunter Walker and seemed to suggest the couple could be seeking to make a swift exit from the nation’s capital ahead of Joe Biden’s inauguration on January 20.

A source later told DailyMail.com that the movers were collecting clothes to be donated for the Salvation Army and they’d planned the pick-up for some time.

The picture, which Walker said was taken by a friend at 11am this morning, showed a man walking out of Javanka’s garage clutching a series of cardboard boxes.

The mover, who appeared to be working for the company ‘College Hunks Hauling Junk & Moving’, was seen hauling the boxes toward a bright orange truck emblazoned with the company’s name.

‘The question I have is which one of [Jared and Ivanka] wanted the “college hunks” to do the move,’ Walker mused in a tweet.

The picture, which Walker said was taken by a friend at 11am on Thursday, showed a man walking out of Javanka’s garage, clutching a series of cardboard boxes It’s unclear whether Jared and Ivanka (together in November) are actually moving out, though the image suggests they are gearing up to make a swift exit from the nation’s capital. A source confirmed to DailyMail.com that they were donating clothes to the Salvation Army Jared and Ivanka’s DC home in the esteemed Kalorama neighborhood is shown above. They moved into the $5 million property in 2017 and have been renting it for around $15k per-month

Other social media users were also quick to mock the couple’s potential exit from the nation’s capital.

‘“Hauling Junk” seems appropriate,’ one user responded. ‘They’d better not even THINK about heading back to NYC.’

Others, meanwhile, drew amusement from the name of the company the couple had enlisted.

It’s unclear if the couple are officially moving out of DC just yet, with less than two weeks until Biden’s inauguration.

College Hunks Hauling Junk also offers services to collect and discard of unwanted items, as well as removal services, according to its website.

The couple, who are both senior advisers to President Trump, moved into the stately home in Washington’s esteemed Kalorama neighborhood in 2017, shortly after Ivanka’s father was sworn into office.

Valued at $5 million, the couple have reportedly been renting the home for around $15,000 per month ever since. 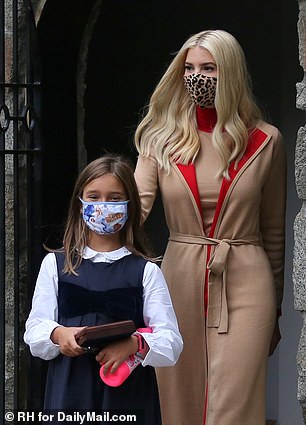 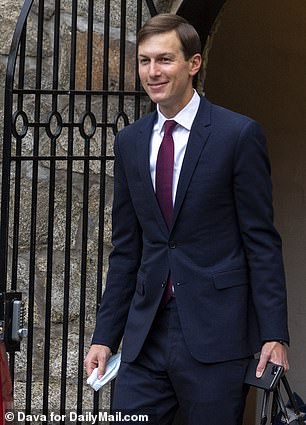 Friends have reportedly been hard to come by for the couple since making their move from NYC to DC, according to the New York Times.

Their decision to enroll their two eldest children in the private Milton Gottesman Jewish Day Elementary School reportedly divided opinions among other parents at the school in 2017.

The event, which featured few masks and a flagrant disregard for social distancing protocol, was later dubbed a super spreading event after dozens of West Wing staff tested positive for COVID-19, including President Trump who was later hospitalized.

Parents were reportedly in uproar back at the school after Ivanka and Jared were said to be uncooperative when administrators quizzed them about potential exposure, allegedly refusing to answer when their kids had last seen Donald Trump. Their youngest was said to be attending in-person classes at the time.

Amid the fallout, the family then withdrew their children from the school on October 19, and enrolled them in a different one in nearby Rockville.

The following month, Joe Biden was announced as the winner of the 2020 election, rendering Trump a one-term president and fueling speculation about where Javanka would be heading next.

Initial reports after the election was called suggested the couple had been eyeing a triumphant return to the socialite scene in New York City.

The couple do own a $4.1 million apartment along Manhattan’s Park Avenue, but Ivanka’s bestfriend Georgina Bloomberg – daughter of Mike Bloomberg – said any return could prove ‘socially difficult for Javanka’, following her father’s tumultuous four years in office.

Brand management mogul Donny Deutsch concurred, telling the Times: ‘In an odd way, they will even have a harder time than Trump himself [returning to New York]. He’s despicable but larger than life. Those two are the hapless minions who went along.’ Within weeks, documents were uncovered that seemed to suggest the couple were instead eyeing up the chance of taking up permanent residency in the Garden State.

The couple had reportedly been preparing plans in late November to present to local officials to substantially build on their ‘cottage’ which is located on the grounds of the Trump National Golf Club, in Bedminster.

Their plans reportedly call for an expanded master bedroom, bath and dressing room, two new bedrooms, a study, and a ground floor veranda – homely additions that hint that the property could be set to become their permanent abode.

While it remains unclear what the specific intentions behind the extension were, Javanka were later reported to have purchased a staggering $31.8 million plot of land along Miami’s ‘Billionaire Bunker’.

The plot in question is nestled in Indian Creek, which is a highly exclusive neighborhood that boasts beautiful waterfront views and a great deal of privacy.

The island has only 34 homes, around 42 residents and its own private 13-person police force.

The local authorities run patrols around the island on land and an around-the-clock armed marine patrol supervises the waters surrounding the island.

Each home on Indian Creek is built around the perimeter of the island to ensure that all residents have a waterfront view, while the middle is occupied with the luxurious Indian Creek Country Club and a 18-hole golf course.

The couple are yet to officially confirm their plans for life post-White House.

President Trump is also yet to speak publicly on the matter, though he has officially changed his residency from New York to Florida, with a move to his Mar-a-Lago estate likely. Reports emerged last last year that Ivanka and Jared submitted blue prints to town officials in Bedminster, New Jersey, seeking to extend their ‘cottage’ (shown above) on the grounds of the Trump National Golf Club Javanka were later reported to have purchased a staggering $31.8 million plot of land along Miami’s ‘Billionaire Bunker’ The island has only 34 homes, around 42 residents and its own private 13-person police force

Ivanka Trump came under fire Wednesday for referring to the mob who infiltrated the US Capitol as ‘American Patriots’ in a hastily-deleted tweet.

‘[A]ny security breach or disrespect to our law enforcement is unacceptable,’ she tweeted to the mob. ‘The violence must stop immediately. Please be peaceful.’

Ivanka then went back on herself after deleting the post, responding to one user who asked if she was calling the mob ‘patriots’ that: ‘No. Peaceful protest is patriotic.’

President Trump also found himself at the center of a political firestorm Wednesday, and into Thursday, with numerous high-profile politicians on both sides of the political aisle – including Nancy Pelosi, Adam Kinzinger, and Chuck Schumer – demanding he be removed from office with immediate effect.

Trump has largely been accused of directing the mob to carry out the siege Wednesday, in which four people died and 52 people were arrested.

Throughout Thursday, politicians have been calling for Mike Pence to enact the 25th Amendment and bring a premature end to Trump’s presidency.

‘What happened at the U.S. Capitol yesterday was an insurrection against the United States, incited by the president. This president should not hold office one day longer,’ Schumer said in a statement. ‘The quickest and most effective way – it can be done today – to remove this president from office would be for the Vice President to immediately invoke the 25th amendment.

‘If the Vice President and the Cabinet refuse to stand up, Congress should reconvene to impeach the president,’ he said.