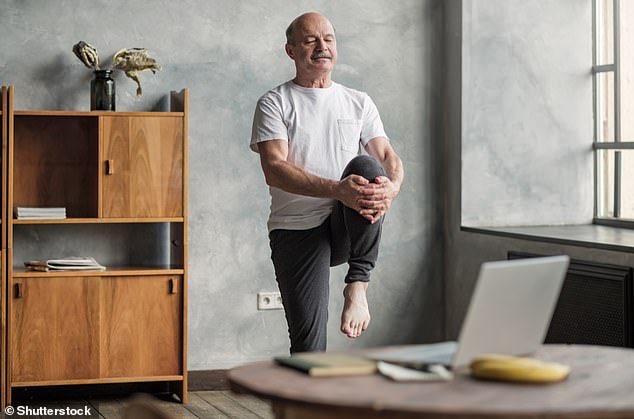 Just ten minutes of physical exercise a day during middle age can prevent the brain from decline, study shows

By Ryan Morrison For Mailonline

Getting ten minutes of physical exercise a day while in middle age can help to protect your brain from decline as you get older, a new study shows.

Their findings suggest greater amounts of ‘moderate-to-vigorous intensity’ physical activity in middle age have a ‘protective’ effect on the brain as you get older.

The participants involved in the study rated their weekly activity levels once at the start and again at two additional times over the 25 year period.

Each person reported the amount of time they engaged in moderate-to-vigorous intensity physical activity, which researchers classified as none, low, middle or high.

The researchers then used brain scans to measure participants’ grey and white brain matter and lesions, or areas of injury or disease in the brain, at the end of the study.

‘Getting at least an hour and 15 minutes of moderate-to-vigorous intensity physical activity a week may be important throughout your lifetime for promoting brain health and preserving the actual structure of your brain,’ Palta said.

‘In particular, engaging in more than two-and-a-half hours of physical activity per week in middle age was associated with fewer signs of brain disease.’

After adjusting for lifestyle factors and demographics people with no moderate-to-vigorous physical activity in mid-life had a 47 per cent greater chance of developing small areas of brain damage after 25 years than those who did exercise.

The team also looked at movement of water molecules in the brain tissue. The researchers then used brain scans to measure participants’ grey and white brain matter and lesions, or areas of injury or disease in the brain, at the end of the study. Stock image

Other research has shown that brain lesions may be caused by inflammation or other damage to the small blood vessels in the brain.

Dr Palta added: ‘Our research suggests that physical activity may impact cognition in part through its effects on small vessels in the brain.

‘This study adds to the body of evidence showing that exercise with moderate-to-vigorous intensity is important for maintaining thinking skills throughout your lifetime.’

The study has been published in Neurology, the medical journal of the American Academy of Neurology.