Senate Majority Leader Mitch McConnell absolutely shamed his Republican colleagues for mounting challenges to the Electoral College calling it a ‘poisonous path,’ which would put democracy in a ‘death spiral.’

McConnell also made clear that he did not believe there was any evidence of widespread voter fraud, as President Donald Trump has claimed.

‘We’re debating a step that has neve been taken in American history, whether Congress should overrule the voters and overtrun a presidential election,’ he said on the Senate floor, after Rep. Paul Gosar and a batch of GOP senators, including Sen. Ted Cruz, objected to Arizona’s Electoral College vote count.

McConnell ridiculed President Donald Trump’s claims of widespread voter fraud in a five-minute speech which will be one of his last as majority leader – and which he said was about the most important vote of his career.

He reminded senators that he was supportive of Trump using the country’s legal system, which handed the president and his team loss after loss. And pointed out that these cases were heard by some of the ‘all-star judges whom the president himself nominated’ – including on the U.S. Supreme Court.

McConnell said that every election is plagued by some instances of vote irregularity.

‘And of course that’s unacceptable,’ he said.

‘But my colleagues nothing before us proves illegality anywhere near the massive scale, the massive scale that would have tipped the entire election,’ McConnell argued. ‘Nor can public doubt alone justify a radical break, when the doubt itself was incited without any evidence.’

He pointed out that the Constitution gives Congress a ‘limited role.’

‘We simply can’t declare ourselves a national board of elections on steroids,’ McConnell said.

Twisting the knife into Trump, McConnell also pointed out that the race between President-elect Joe Biden and Trump ‘was not unusually close.’

‘The Electoral College margin was almost idential to what it was in 2016,’ McConnell pointed out.

‘If this election were overturned by mere allegations from the losing side our democracy would enter a death spiral,’ McConnel warned. ‘We’d never see a whole nation accept an election again.’

‘Every four years there would be a scramble for power at any cost,’ he added. ‘This will lead us down a poisonous path where only the winner accepts the result.’

McConnell also pointed out that the Republican Party has pushed to keep the Electoral College system, suggesting Wednesday’s shenanigans could further push Americans to wanting to get rid of it.

‘Leaving many of our states without any real say at all in choosing a president,’ he said.

Addressing his GOP peers, McConnell said, ‘Self goverment, my colleagues, requires a shared commitment to the truth and a shared respect for the ground rules of our system.’

‘We cannot keep drifting apart into two separate tribes with a separate set of facts and separate realities,’ he said.

He also encouraged Republicans to be better than the Democrats, who previously challenged Electoral College votes in 2001, 2005 and 2017.

‘But we must not imitate and escalate what we repudiate,’ he argued.

He said the Senate’s ‘duty is to govern for the public good.’

‘The United States has a higher calling than an endless spiral of partisan vengeance,’ he said.

McConnell declared he would not be joining any of the objections Wednesday to challenge the count.

At least 14 senators signed onto the effort, pressed by Trump.

Democrats are standing firm against the objections.

House Minority Leader Chuck Schumer – who is due for a promotion once the results in the two Georgia Senate run-off races become final – applauded McConnell’s efforts in his floor speech directly afterward.

‘This insurrection was fortunately discouraged by the leadership of the majority party, but it was not quelled,’ Schumer said.

Son, 21, is arrested after stabbing his parents to death in their suburban Massachusetts home 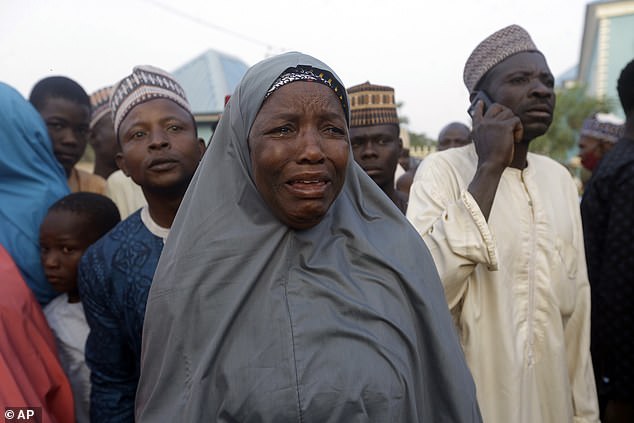