Actor Kangana Ranaut now has more than three million followers on Twitter. The actor took to her Twitter account to thank her many fans and also to speak of her journey since she began tweeting herself.

She wrote: “Thank you everyone, I joined in last August this was my team handle with few thousand followers I never thought so soon we will be 3 million of us, twitter is distracting at times but it’s also fun, thank you.” She was responding to a follower’s tweet.

Thank you everyone, I joined in last August this was my team handle with few thousand followers I never thought so soon we will be 3 million of us, twitter is distracting at times but it’s also fun, thank you ❤️ https://t.co/QS7QTyM6F2

Kangana has never held herself back and taken aim at all on Twitter. Only recently, she had tweeted in opposition to actor and politician Kamal Haasan and MP and senior Congress leader Shashi Tharoor on their stand on income for homemakers. She had written: “Don’t put a price tag on sex we have with our love, don’t pay us for mothering our own, we don’t need salary for being the Queens of our own little kingdom our home,stop seeing everything as business. Surrender to your woman she needs all of you not just your love/respect/salary.”

In the recent few weeks, she has had a fiery exchange of words with Punjabi singer and actor Diljit Dosanjh over his support for farmers from Punjab, who are protesting against the recent farm bills, brought in place by the Central government.

She had mocked Diljit for going off on a holiday after showing some initial support for farmers. She had written: “Wah brother!! Desh mein aag lagake kisanon ko sadak le baitha ke local karantikaris videsh mein thand ka maza le rahe hain, wah!!! Isko kehte hain local kranti… (After putting the nation on fire, making farmers sit on streets in protests, local activists are off to enjoy cold climates for holidays. This is what is called local activism).”

At the height of the Sushant Singh Rajput case last year, she had created quite a stir when she had equated Mumbai city with Pakistan-occupied Kashmir.

Shilpa Shetty poses with daughter Samisha, the little one is baffled by all the attention. See cute pics

Inside Kajal Aggarwal-Gautam Kitchlu wedding reception: Newlyweds burst into laughter as they raise a toast 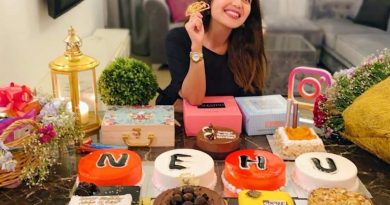 Neha Kakkar gets birthday love from Rohanpreet, gifts include cakes and bag of Cheetos