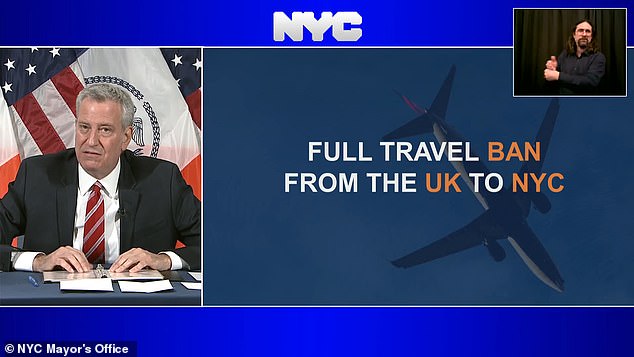 New York City mayor Bill de Blasio has called for a full travel ban from the UK to the US after the ‘mutant’ strain of COVID-19 that has caused cases to surge in Britain has now been found in New York.

De Blasio’s plea came during his daily press conference from City Hall on Tuesday morning, in which he urged the federal government to ‘stop the madness’.

New York Gov. Andrew Cuomo followed up with a request of his own later Tuesday morning that all international travelers should be required to provide a negative test before they fly to the US.

The lawmaker’s calls follow an announcement Monday that the new, super-infectious UK variant of the coronavirus was discovered in upstate New York.

The first US case of ‘mutant’ strand was reported in a remote nursing home in Colorado last week. It has since also been discovered elsewhere in the state, as well as in Florida and California, with at least 10 people infected.

De Blasio urged the White House to ‘shut down the danger now’ and stop all travel to and from the UK to prevent further exposure.

‘We all should be worried about this,’ De Blasio said of the new strain, clarifying that it isn’t more deadly, but is more infections that the original strand.

‘We need the federal government to step up here and ball all travel from the US to the UK,’ he said. ‘It’s time to stop the half measures.’

De Blasio then went on to incorrectly state: ‘Right now you can still get on a plane in London and not even have proof you have a negative test, then come to New York City and merrily spread the disease. Why is that going on. Why?’

As of December 28, the CDC actually requires all airline passengers arriving from Britain – including US citizens – to test negative for COVID-19 within 72 hours of departure. 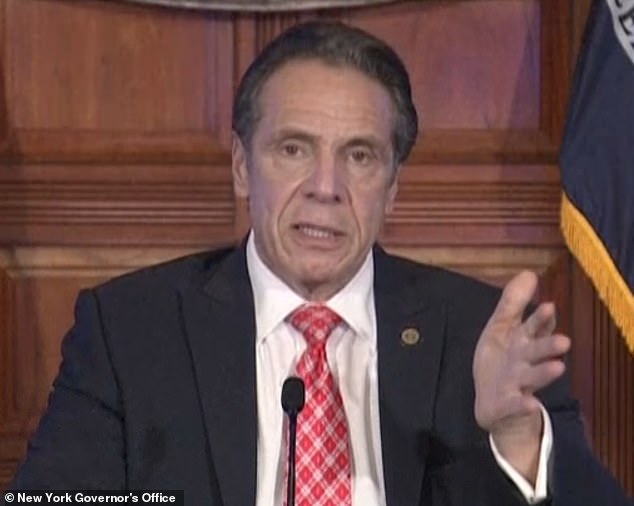 Gov. Cuomo said later Tuesday that a travel ban wasn’t needed, only mandatory testing for all international passengers before they arrive in the US He urged the White House to ‘shut down the danger now’ and stop all travel to and from the UK (Pictured: British travelers shown waiting to board flights at Heathrow Airport on Jan. 2)

Referring to the lack of a ban on travel to the UK as ‘madness’, de Blasio called for the federal government to implement such a policy ‘right now’. The Mayor said a total ban would buy the state time to ‘get vaccinations done’ and properly protect residents.

‘But if we don’t have a total ban, then we are literally inviting this horrible variant in the door even more – and that makes no sense,’ de Blasio said.

‘The inconvenience [the ban] poses to travelers pales in comparison to the danger this variant poses to all of us.’

The Empire State has become the fourth in the nation to detect the ‘mutant’ variant of the virus that began ravaging across the UK towards the end of last year, causing cases to surge and forcing Prime Minister Boris Johnson to announce a third nationwide lockdown Monday.

Cuomo identified the New York patient Monday as a male jewelry store worker in Saratoga Springs, who is in his 60s. The man did have COVID-19 symptoms but is ‘on the mend’, he said.

Three other people linked to the jewelry store have also since tested positive for COVID-19, but Cuomo said it’s unknown if they have the variant.

Much like the first US case of the variant in Colorado, the man had no recent travel history, suggesting a community spread.

The CDC believes the strain first emerged in Britain in September and said last week it suspects it has been circulating in the US for some time.

The strain is thought to be up to 50 percent more transmissible but not more deadly.

It’s now reported in the UK that around one of every 50 residents – around one million people – now has coronavirus.

In light of the surge, as of December 28, the CDC  began requiring all airline passengers arriving from Britain – including U.S. citizens – to test negative for COVID-19 within 72 hours of departure. Unless a dual-citizen or travelling for essential purposes, the majority of Brits are currently banned from entering the US.

The UK is also currently grappling with a second mutant strain of the virus, said to originate from South Africa, which experts fear may be resistant to vaccines and potentially more deadly.

That strain has not yet been detected in the US, and de Blasio made no reference to it during his Monday conference.

Cuomo, meanwhile, has called on the White House to require all international passengers arriving in the US to provide negative COVID-19 tests before traveling.

Insisting that government leaders are supposed to be ‘competent’ during his own briefing Tuesday, Cuomo asked: ‘Why do we not have mandatory testing of everyone flying into this country. I mean why not?

‘Not a travel ban,’ he said in an apparent allusion to de Blasio’s comments, ‘just mandatory testing. Just test all international travelers before entry. Tell the airlines you have to test them before they got on a plane. Or if you land in this country, tell them we’re not going to allow you in until you take a test.’ The super-contagious mutant strain of COVID-19 that has forced the UK into its third lockdown has already been detected in the US. Ten people spread across New York, California, Colorado and Florida have been confirmed to have the variant of the virus

Cuomo went on to lament the fact that 140 countries either banned travel to and from the UK, or introduced mandatory negative tests prior to departure, ‘before the USA acted’.

‘New York State acted before the USA,’ Cuomo bragged. ‘I called the airlines and said I want New York to be added to that list of 140 countries, and they added it.’

The Governor continued by saying what he finds ‘really infuriating’ is that ‘this is what happened to us last spring.’

‘The virus left China, it went on to Europe, it was in Italy, it went to the UK and people got on a plane and came to New York,’ he said. ‘That’s why New York had an explosion in cases.’

‘Now there’s a second strain and it came from the UK again,’ he continued, raising his voice. ‘Again the USA did absolutely nothing. If the USA won’t act then New York State will act,’ he said.

Cuomo continued that he wouldn’t let the federal government turn New York into a ‘petri dish’ for the new variant, by allowing the virus to land in the state’s airports unchecked.

Yesterday, a group of US airlines penned a letter to the White House, also backed calls to implement a global testing program requiring negative tests before most international air passengers return to the US.

The request came in a letter authored by Airlines for America (A4A), a trade group that represents most US airlines including international giants American, United and Delta, in which they also called on the officials to reopen borders to Britain, Europe and Brazil ‘as soon as possible’.

The group said the entry restrictions should be ‘removed concurrently with the testing program, which will provide yet another layer of safety in the travel journey’.

‘We believe a well-planned program focused on increasing testing of travelers to the United States will further these objectives in a much more effective way than the blanket travel restrictions currently in place,’ the airlines wrote.

Within hours of the letter’s emergence, Boris Johnson announced Britain would be locking until at least mid-February.

As a result, British officials have put a halt to all non-essential travel, including international air travel. Within the UK, domestic holidays are also banned.

The UK Government stressed that Britons currently abroad do not need to rush back to the UK. But ministers are poised to require a negative COVID-19 test for all UK arrivals to curb the spread of the disease.

Insisting that government leaders are supposed to be ‘competent’ during his own briefing Tuesday, Cuomo asked: ‘Why do we not have mandatory testing of everyone flying into this country. I mean why not?’ The UK is also currently grappling with a second mutant strain of the virus, said to originate from South Africa, which experts fear may be resistant to vaccines and potentially more deadly The South African strain has not yet been detected in the US, and de Blasio made no reference to it during his Monday conference

De Blasio Tuesday also announced that up to 160 vaccination sites will be set up across the five boroughs of New York City by the end of the week.

New 24-hour ‘mass vaccination’ sites will also open across the Big Apple within ‘a few days’, the mayor pledged.

Nationwide, the vaccine roll out has been hampered by a number of logistical hurdles, confusion over who can currently get a shot and a slowdown of jabs of the holiday season.

Data published by the CDC on Tuesday indicated that around 4.5 million people have so far received their first dose of either the Pfizer or Moderna vaccines in the US, which is well short of President Trump’s goal of 20 million by December’s end.

While frustration over the disappointing national rollout out continues, disputes have emerged on a local level too – not least in New York.

During their respective Monday conferences, de Blasio and Cuomo exchanged a war of words regarding vaccine distribution and administration.

Come as the first time in sometime that the pair have been at odds over an issue, the feud was ignited when a spokesperson for the mayor accused Cuomo of ‘tough guy antics’. De Blasio then called the governor arrogant.

The Mayor’s comments came in response to Cuomo’s threat earlier in the day to fine hospitals up to $100,000 if they fail to use their current vaccine inventories by the end of the week.

Cuomo also said hospitals would have to use their inventories within seven days of receipt from now on in, adding they could be disqualified from the program if they fail to do so. The Governor said around 46 percent of hospitals statewide are yet to use their full vaccine allocations, blaming poor hospital management for the disappointing return.

De Blasio appeared to take offense at the criticism leveled towards the city’s public health system, calling on Cuomo to ‘respect and trust our health care professionals’.

Hizzoner doubled down on the backlash Tuesday, kicking off his press conference with a lengthy tribute to ‘our healthcare heroes’.

Around 110,000 people in New York City have been vaccinated since inoculations began, but de Blasio is tipping immunizations to speed up in the weeks ahead.

The mayor called on the federal government to keep the supply chain steady and efficient, and blamed the governor for not expanding the option to more groups earlier. Obesity: the fat of men and women is genetically different and determines different health problems | The NY Journal