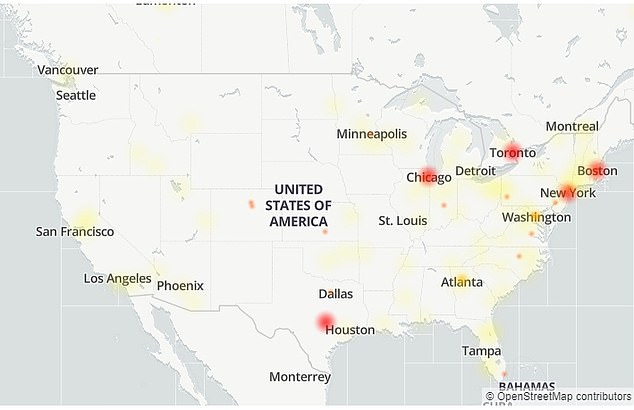 Slack, a business communication platform, has gone down across the world – just as many start their first day back to work after a long holiday break.

The outage is hitting both the website and smartphone application and is affecting users’ ability to send and receive messages.

Slack addressed the outage at 10:14am ET on its status page saying:’ Customers may have trouble loading channels or connecting to Slack at this time.’

‘Our team is investigating and we will follow up with more information as soon as we have it. We apologize for any disruption caused.’

DownDetector shows reports started around 9:56am ET, with many users citing connecting and sending issues.

DownDetector shows reports started around 9:56am ET, with many users citing connecting and sending issues.

Slack has become a staple among many businesses that have switched from the physical office to a virtual one during the coronavirus pandemic.

The firm says it currently has some 75 million daily users that rely on the platform to conduct businesses.

However, tens of thousands to even millions of people returning to work Monday after a long holiday break are unable to access the service or send and receive messages.

Messages do appear as if they are sent, but then show gray within the chat and a ‘can’t send’ notification shortly appears. 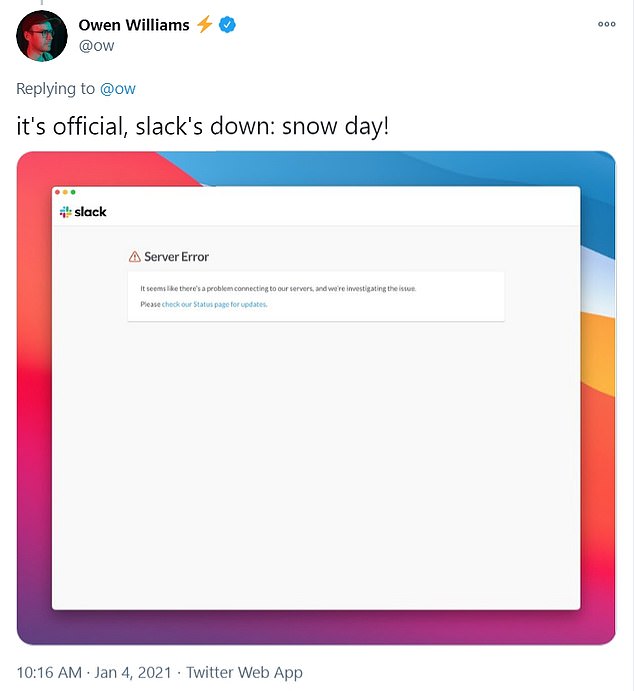 Users have shared hilarious tweets on Twitter about Slack not working, saying it is a snow day because they cannot work without the communication platform Slack, a business communication platform, has gone down for thousands across the US – just as many are resuming work after a long holiday break. Users are unable to reply or send messages using the desktop and smartphone application

Monday is the first day back to work for many Americans

Many users have flocked to Twitter to share their frustrations, and joys, about Slack experiencing an outage

DownDetector shows the largest issues is connecting to Slack, followed by sending messages.

Major cities in the US, like New York, Chicago and Boston, are shown in red on DownDetector’s map – meaning they are included in the outage.

Reports from the UK, China and other countries also say Slack is not working properly.

Many users have flocked to Twitter to share their frustrations, and joys, about Slack experiencing an outage. 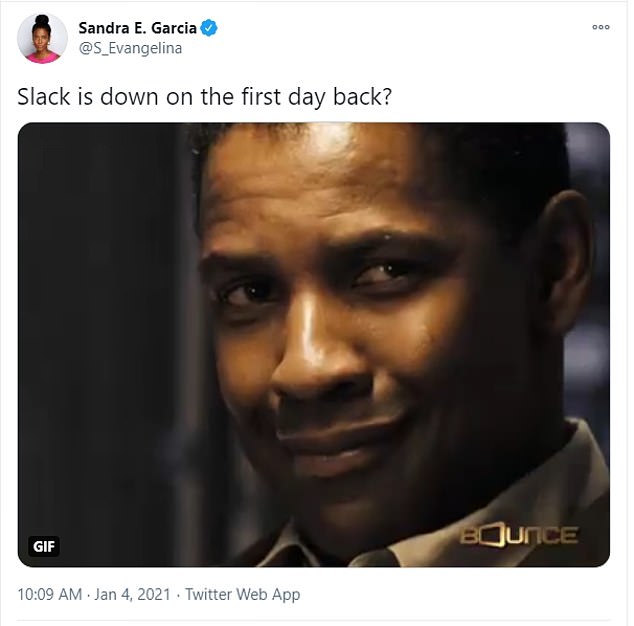 Fentoozler jokingly asked if ‘we all get to go back on vacation right?’

Some Twitter users see the outage as a snow day because they use Slack to carry out many of their tasks during work.

Azad Yakatally shared on Twitter: ‘Slack is down, the year is canceled.’

While Fentoozler jokingly asked if ‘we all get to go back on vacation right?’

Another Twitter user by the name of ‘Grant’ shared a meme with the iconic Yoda character from Star Wars sprawled out on the floor and surrounded by bottles of Modela while ‘baby yoda’ peaks in from the other room.

‘First work day of 2021 and our whole country is down,’ Grant wrote with the meme. After the crazy year that was 2020, so users are not surprised that the first day of 2021 would not go smoothly Memes of Slacks mishap are flooding Twitter, with many poking fun at the fact that it is the first work day of the new year

This is the second outage to hit Slack in just a few months.

The platform was experiencing issues in October that, again, left users across the world unable to send or receive messages – and it also happened on a Monday morning.

Down Detector, a website that monitors online outages, showed an uptick in outage reports regarding Slack around 9:30am ET.

Slack addressed the issues at 10:05am ET on its website stating:’Some users may be experiencing slowness with Slack in the desktop, browser and mobile at this time. The issue is impacting sending messages and troubles with API calls,’ the firm shared in a statement.

However, around 1:41pm ET, the firm said it was seeing signs of improvement.

‘I’m a fanatic about voting’: Arnold Schwarzenneger offers to pay to reopen polling places in South Cristian Castro in love, presents his girlfriend | The State